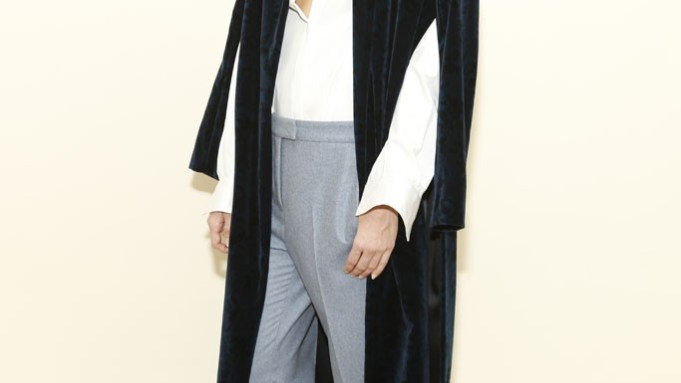 Listening to Rosetta Getty talk about fashion, it’s difficult not to be captivated by the passion she exudes for her chosen métier.

This fall, Getty will launch a collection for women just like herself. To a wider audience, her name may stir different associations — she is married to Balthazar Getty, the actor, musician and scion of the notable West Coast family, which is now largely known for its philanthropy and commitment to the arts. Those who expect the Los Angeles native to be another socialite looking to design as a pastime between lunches and benefit galas, though, will find her to be anything but.

Getty has been involved with fashion for years. At age 14, she started in the industry as a model, living between New York, Paris and Milan for several years. When she grew tired of the circuit, she enrolled at Otis College of Art and Design, and launched the luxury children’s dress label Rosetta Millington, which, at its peak, had wholesale sales of $5 million and was sold in over 350 specialty stores and retailers like Saks Fifth Avenue and Neiman Marcus.

After marrying Balthazar, “I licensed it, had a bunch of kids and ended up doing a little bit of women’s wear,” she said, nonchalantly, referring to Riser Goodwyn, a small ready-to-wear label mostly intended for friends and family.

“We decided to have another child and we didn’t have the staff to support me not being full-time and me not being pregnant,” she said with a smile.

Now that the youngest of her four children is six, Getty is ready to give her fashion dream another go. Her hectic lifestyle informs many of her sartorial decisions.

“Being from California and being very busy as a mother, working — we do a lot of charity work, my husband has two careers — I need it to be easy,” Getty said. “I need to wake up, get the kids to school, get to work and show up for a lunch. I need to entertain, I need to go to a charity event. My philosophy is basically ‘have it be seamless, have it be elegant but still be attractive and feminine.’ I need to wear it from morning to evening.”

The California climate also encouraged her to go for more lightweight, seasonless fabrics that can easily be layered, from ultrafine fabrics to Japanese cotton twill.

She partnered with brand management and investment firm The Dock. Its chief executive officer, Matt Walker, had the kind of expertise that appealed to the designer, having served as president and chief operating office for The Row for over three years before launching The Dock, which, last year, invested in Creatures of the Wind.

Getty, Walker said, “brings a very fresh and innovative approach to West Coast luxury. In addition to her own sophisticated and impeccable style, she has a very deep understanding of her customer, how her customer lives and the way they want their clothes to fit. I think it was more the focus on delivering something that was really innovative to that consumer which drew us to the partnership.”

Walker declined to disclose financial details of the partnership, but noted, “Our typical relationship with brands for The Dock is that we become a partner in the business. We typically take an equity position and would invest anywhere from $500,000 to up to $2 million into it. We become partners, and then also offer front- and back-of-house services to help grow their brand.”

The collection opens in New York today. It is priced at suggested retail range from $635 for skirts to $6,750 for gowns, although some special furs can go up to $16,000.

Walker didn’t disclose sales projections for the line but suggested similar deals with other talent could be in the works.

“The Dock is constantly on the lookout for potential partnerships,” he said. “Our typical approach is to get to know a brand and get to know the people involved in the team over an extended period of time before we consider investment. We are considering partnering with three to four more bands over the next couple of years.”

As for Getty, it’s the fulfillment of a lifelong dream, even if she cracks a wry smile at the notion of her husband’s full support.

“We have been together so long,” she said. “This is what I do, this is what I think about all day. Half the time I make my own clothes, which drives him crazy…things that are in my head only, and I run to the tailor. It takes a huge amount of work to make your own clothes, not to mention expense, and he can get frustrated with how much time and energy I spend making one piece for one night.

“He knows that this has always been my dream,” she added. “He knows this is what I have to do. It comes down to one thing — this is my dream.”