Queen Elizabeth II took a tour of the display of Catherine Middleton’s wedding dress at Buckingham Palace and had one word to describe it: “Horrible.” 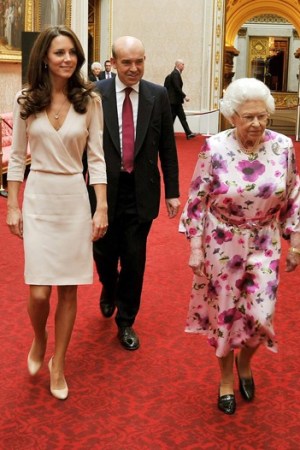 LONDON — Queen Elizabeth had one word for the display of royal bride Kate Middleton’s wedding dress at Buckingham Palace on Friday: “Horrible.”

During a walk-through of the summer exhibition, which features the royal wedding gown, shoes, tiara, and even the couple’s multi-tiered cake, the queen examined the dress, which is shown in the dimly-lit ballroom, with the tiara and veil floating above it.

Press Association, the only outlet that followed the Queen and her new granddaughter-in-law, the Duchess of Cambridge, on their private tour of the show, reported that the monarch was “spooked” by the display. The duchess was wearing a Joseph crepe de chine “Athena” dress that retails for 180 pounds, or $293, and Jim Choo “Lovely” shoes that retail for 330 pounds, or $538.

“The monarch led the way and, with her hands clasped behind her back, strode into the ballroom and stopped about 10 feet from the dress with Kate standing beside her.

“As the pair chatted, the pitch of the Queen’s voice raised and she said ‘horrible’ and then ‘horrid.’ It appeared the mannequin’s lack of a head may have perturbed the Queen, who added: ‘It’s made to look very creepy,’” the media outlet reported.

The duchess took a more diplomatic tack, saying the dress display had a “3D effect.” She already saw the display earlier in the week when she joined some of her wedding party for a private viewing.

Buckingham Palace was responsible for curating the show, “The Royal Wedding Dress: A Story of Great British Design,” which opens Saturday and runs through October 3, A McQueen spokesman declined to comment on the Queen’s reaction.

The ivory satin gazar dress is the centerpiece of the summer exhibition. “It was a feat of engineering,” said Burton of the dress she created for royal bride. “It needed to be light,” but it also had to keep its shape and not crumple on itself when she walked down the aisle.

Burton spoke about her creation during a 5-minute video. The show is part of the annual summer opening at Buckingham Palace. An exhibition of Faberge eggs and objects belonging to the British royal family is also taking place as part of the summer show.

In the video, Burton describes the process of designing the gown, pointing out that six different types of lace were used, each with a different motif, and that the aim of the overall design was to, “Look to the past, but also to the future. There are Victorian and Arts and Crafts references, but we used a very modern way of cutting, and the fabric is light.”

Caroline de Guitaut, curator of the exhibition, said it was the duchess’ choice to put the dress on display at Buckingham Palace.

“The Duchess considered a number of options, and then decided that she would like it to be displayed here at Buckingham Palace which of course was the scene for the celebrations after Westminster Abbey, so it is very fitting that it should be shown here exactly where the reception took place.”