Ruth Finley Brought Organization to the Chaotic World of Fashion

Designers wouldn't schedule anything in the industry without checking with Finley first. 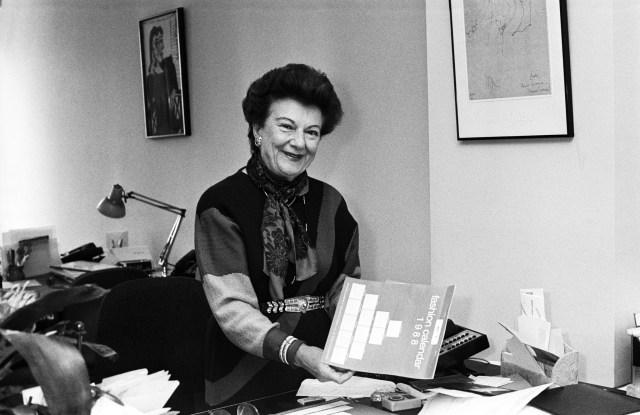 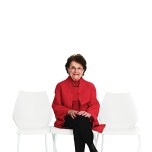 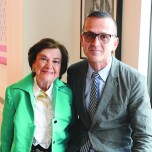 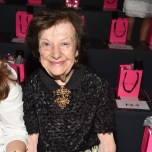 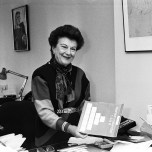 Known as an “air traffic controller,” for the fashion industry, Ruth Finley was fondly remembered Tuesday by designers and industry executives.

Finley died Saturday of respiratory failure at Lenox Hill Hospital in New York at the age of 98, as reported.

In 1945, Finley founded the Fashion Calendar, which became a clearinghouse for fashion events, benefits, parties and fashion shows, and brought organization to the chaotic, fast-paced fashion world. She would sometimes schedule more than 600 fashion shows during each of the 10-day New York Fashion Week events. She was described by designers as a very gentle, but strong woman who didn’t play favorites. Designers knew they couldn’t schedule anything in the industry without checking with Finley first.

”Her passion and commitment to the fashion industry was for all, whether a new designer just beginning or a top 10. She really ruled for all the years. Her calendar was like New Year’s. It was what is was. She will be missed,” said Donna Karan.

“I’ll never forget how we were nervous when we had to call Ruth Finley when James [Mischka] and I did our first fashion show three decades ago,” said Mark Badgley, of the design team Badgley Mischka. “She really controlled the fashion show calendar then.”

“It didn’t matter if you were a brand new designer out of the gate or you were a seasoned veteran with a huge business, she sincerely wanted what was best for the designer,” Badgley added,

Mischka noted that Finley championed new designers. “She wouldn’t let them get pushed around by the established ones,” he said, noting that she always came to their fashion shows. “We always thought she was the voice of reason in the fashion industry,” he added.

Diane von Furstenberg recalled when she began her business in 1972, Finley was her first phone call after she had shown her first dresses to Diana Vreeland at Vogue.

Vreeland’s assistant at the time, Kezia Keeble advised her to do three things for fashion week: First, book a hotel room at the then-Gotham Hotel where the California market was showing; next, list herself in the Fashion Calendar, and finally, put a small announcement in WWD. “I did it all from Kezia’s office. I have always cherished Ruth Finley since,” von Furstenberg said.

“Ruth always did such a fine job running the Fashion Calendar year after year; she will be surely missed,” said Calvin Klein.

”Ruth was supportive from Day 1, literally,”  said Peter Som. “She took care of me, my show time, made sure I wasn’t after any designers with notoriously late start times. She really helped establish my show time. Besides that – and maybe more importantly- she was a nice person with no pretense and always a big smile. Knowing Ruth was in your corner was a huge comfort as a new designer. She will be missed – but not forgotten,” said Som.

Fern Mallis, creator of Seventh on Sixth and a fashion consultant, said of Finley: “She was always a pleasure to work with. If there was a conflict, she would always offer other suggestions. We always did our IMG and Seventh on Sixth calendar with her and she was never difficult and always understood the situation. Her agenda was always to make it workable so everyone could get the time slot.”

According to Mallis, Finley had a sense of certain shows that could overlap when they were in different markets once the calendar became so packed with shows. “She came to all the shows, you would always see her at fashion week. She was like fashion’s grandmother. She was little and cute and always perky. If she was sitting in the sixth row or the seventh row, she never complained. She just came to support everybody,” Mallis said.

While the pink pages of her Fashion Calendar were a little late to enter the electronic age, Mallis said, “The old-fashioned one worked the best.

“Everyone I know misses having the pile of pages in their hand. You knew when every market opened, when every trade show opened, when anybody had a benefit or a party or an exhibition opening. It was a comprehensive guide to everything going on, every single day of the week, every month, that had any interest to people in the industry and beyond, and that doesn’t exist anymore. That calendar was genius in its time. It’s very different now.”

In a video when she won the Board of Directors’ Tribute Award at the CFDA Awards in 2014, Finley recalled all the changes that occurred in the fashion industry as the shows moved from showrooms to uptown — Bryant Park and Lincoln Center — to downtown and even to Brooklyn, where she had scheduled thousands of women’s and men’s shows over seven decades.

“I was on the phone 150 times a day,” she said in the video. Describing what it took to make it in her job, she said, “You must have a good memory, a lot of patience and never play favorites and work magic wherever you can….When I look back, I may be the luckiest woman in the world,” she added, citing not only her fashion career, but bringing up her family and supporting numerous charities. Over the years, Finley raised more than $2 million for Citymeals on Wheels.

Ruth Finley in 2014 at the CFDA Fashion Awards.  Matteo Prandoni/BFAnyc.com/REX/Shutterstock

In another video tribute when Finley received a lifetime achievement award from the High School of Fashion Industries in 2008, Michael Kors recalled what happened when he started his career. “I called Ruth and I said, ‘I want a show on Monday at 10 a.m.’ She laughed and said, ‘Who doesn’t?’”

Born on Jan. 14, 1920, in Haverhill, Mass., Finley graduated from Simmons College in 1941, where she studied journalism. She came to New York and took a job as a window dresser at Lord & Taylor and later worked at the New York Herald Tribune.

The genesis of the Fashion Calendar came earlier when Finley had met with two women in fashion who were complaining that Saks Fifth Avenue and Bergdorf Goodman were doing two shows the same day, same time. It gave her the idea that fashion needed a clearing house to avoid those kinds of problems from happening. With a loan of $1,000 from a college friend, Finley launched the Fashion Calendar in 1945, and hired her college roommate as her secretary. She believed that participating designers and subscribers would pay for the Fashion Calendar in order to avoid conflict and unnecessary competition among designers for time slots, models and venues.

While it took several years for Fashion Calendar to turn a profit, Finley was determined to keep the publication afloat. Interestingly, the typist who came to help put the calendar together on Tuesday nights was 18-year-old Doris Roberts, who later played Raymond’s mother on “Everybody Loves Raymond.”

Finley got her break after a scheduling-related incident with Norman Norell. Having initially spurned the Fashion Calendar, he immediately realized its value when his black-tie evening show ended up being scheduled at the same time as a major charity event and he had to cancel. After that, he always personally scheduled his shows with Finley.

After two years in business, Finley got married, moved to Long Island, N.Y., and had two sons, but never stopped working. She divorced her first husband but soon remarried and moved back to the city and gave birth to her third son. Her second husband died suddenly in 1959 at the age of 41, and Finley had to balance a full-time career with being a full-time mother. She was very active in her sons’ lives, serving as president of every parents’ association at her children’s schools and den mother of the Cub Scout troops, as well as being a soccer mom.

The calendar, which she ran for nearly 70 years, was printed on pink sheets, as well as published online. She sold it to the CFDA in 2014, when she was 94 years old. At the time of the sale, one-third of her subscribers were getting the pink version every two weeks in the mail for $550 for a year, and the rest received it online for $495.

In 2015, WWD reported that Finley was being filmed for a documentary that was being directed by Christian D. Bruun. The film, which will be called “Calendar Girl,” is in post-production. The film explores Finley’s life, the Fashion Calendar and American fashion since she has been involved with it, featuring such people as Kathleen Turner, Betsey Johnson, Tommy Hilfiger, Nicole Miller, Bill Cunningham and Carolina Herrera.

A private family service will be held Sept. 3 in Haverhill, Mass. An open memorial service celebrating Finley’s s life will take place in early October at The Fashion Institute of Technology. Details haven’t been finalized yet.

Donations in Finley’s memory can be made to The Ruth Finley Scholarship Fund at The High School of Fashion Industries, 225 West 24th Street, New York, NY 10011.