The chief executive officer hopes to triple the size of the French fashion house, which last year broke the billion-euro revenue mark. 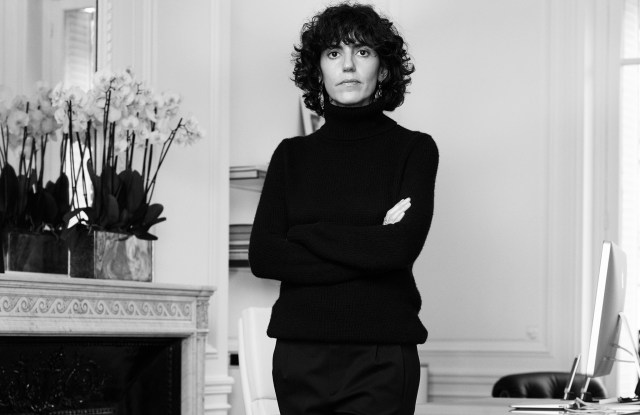 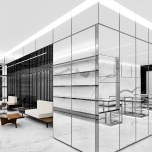 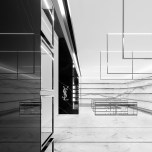 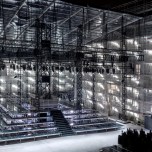 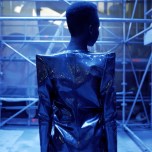 The chief executive officer of Saint Laurent last year steered the brand’s revenues past the barrier of one billion euros, or $1.11 billion at average exchange rates. The house posted comparable growth of more than 20 percent for the sixth year in a row, despite a change in creative direction mid-year.

Its explosive growth has turned Saint Laurent into the second powerhouse at parent company Kering, though still less than a third of the size of Gucci. Now Bellettini has set her eyes on the three-billion-euro mark, a target she has felt within reach ever since she joined the company in 2013.

“Everywhere I was looking at the brand, the potential was like an energy that was there and that was ready to explode,” she told WWD in an interview at Saint Laurent’s corporate headquarters on Avenue George V.

Among her plans for 2017 are growing Saint Laurent’s store network, including the opening this month of a second flagship in Tokyo; a deeper push into travel retail; the opening of a dedicated shoe workshop in Italy; a revamp of its e-commerce site, and heavy investment in digital communications.

Then there is the company’s planned move next year into new headquarters on the French capital’s Left Bank, located in a former Cistercian convent. Currently under renovation, the location provided the dramatic backdrop for creative director Anthony Vaccarello’s fall 2017 collection, shown in February.

“We are a 1.2-billion-euro brand, but we only had 159 stores at the end of last year, so it’s still not huge,” noted Bellettini. “We have been able to afford so far a lower number of stores because we focused a lot also on the wholesale business and on the productivity of our existing stores. But we can expand in all markets.”

Saint Laurent posted revenues of 1.22 billion euros, or $1.35 billion, in 2016, up 25.3 percent from the previous year. Sales in directly operated stores advanced by 32.4 percent and they now account for 68 percent of total sales.

The brand opened 23 stores last year and closed six underperforming sites, and it expects to continue adding on average 20 locations per year going forward. Having opened stores in Mexico, Canada and China in 2016, it will unveil a boutique in Florence soon and sees plenty of potential in Europe still.

“There are entire countries in Europe where we don’t have stores — take Switzerland,” she said. “There are still markets where we can open very organically, so these are the areas where we are focusing the most, without of course losing the attention to emerging countries.”

In mainland China, Saint Laurent has 17 points of sale but no wholesale business. Last October, it opened a location in Shanghai at the Plaza 66 shopping mall and office complex, and sees further opportunities in Tier 1 cities.

“The plan for China is, in the next three to five years, to arrive at a maximum of 25 to 30 stores, but in the right locations and with the right size,” Bellettini said.

In Japan, which accounted for 9 percent of revenues last year, Saint Laurent opened its first flagship in Omotesando in 2015 and is unveiling a second in Ginza on April 20. The three-story boutique will feature signature materials such as white and black marble, glass and nickel-plated brass.

“The facade is unique. It’s black marble with a combination of glass. If you go there at night when it’s lit up, it’s incredible,” said Bellettini, who sees the flagship as a tool for communicating the brand to both local Japanese customers and tourists visiting Tokyo.

Saint Laurent plans no additional freestanding stores in Japan, but instead wants to open, relocate or expand shops-in-shop within department stores in Tokyo and other cities such as Osaka, Nagoya and Kyoto.

“Japan is a country where the acceleration very much depends on the tourists. It’s a country that now is growing very fast again, because the Chinese are back, but you need to focus on the organic growth that you can have in Japan, that is clearly single-digit with the local clientele,” Bellettini said.

Travel retail will be another strong focus, with openings planned this year at Roissy-Charles-de-Gaulle airport in Paris and London’s Heathrow. Nonetheless, the Italian executive sees local customers as the bedrock of Saint Laurent’s growth.

“I talk a lot about the growth with the local clients, not because I don’t care about the touristic flows, but because if you plan your business on the base of tourists, when tourists change their destination, you don’t have a foundation of the business for the stores that you have opened in a certain location,” she said.

“Look at what happened in Europe last year. The business in Europe in the past years was driven tremendously by the Chinese traveling in Europe. With the terrorist attacks, in particular in France, they almost disappeared,” she said, noting that Saint Laurent was able to recoup the lost business elsewhere.

Bellettini, previously worldwide merchandising director at Bottega Veneta, believes that building authentic relationships with customers, based on personalized service, is key to riding out turbulence and outperforming competitors.

“The buy of the Chinese traveling is not the same as the same Chinese when they are at home. But if you don’t talk to them in the right way at home, doing the right strategies at home, then when they travel, they don’t choose you. They simply make a buy looking at the difference in prices, and this doesn’t build any loyal business,” she argued.

Bellettini credits Saint Laurent’s double-digit growth rate over the last six years to the strong fundamentals in place when she joined the house.

Its then-creative director, Hedi Slimane, had embarked on an all-encompassing overhaul of product and image, changing the name of the collection and stores to Saint Laurent to symbolize the principles of youth, freedom and modernity that inspired the creation of Saint Laurent Rive Gauche ready-to-wear back in 1966.

The brand boasted a balanced assortment of rtw, accessories and shoes; a good mix of retail and wholesale, and an even geographic spread. Yet the size of the business was out of step with its reputation as one of the jewels of Paris fashion, on a par with the likes of Dior or Chanel.

Bellettini set about streamlining operations, devolving power to regional heads by putting them in charge of all aspects of the business. She created business units by product category, establishing a single chain of control from the development of products to their delivery in stores.

Saint Laurent has internalized the prototyping and part of the production for leather goods and shoes. It produced its first day bag last year at its atelier in Florence, and is scheduled to open its shoe atelier in Padua, northern Italy, in July.

Bellettini estimates that within a year, Saint Laurent will be able to produce 7 to 10 percent of its bags and shoes in-house.

“To improve profitability, you need to focus on processes and efficiencies, because that has to become the platform on which the creativity can expand,” she said. Operating profit was up almost 60 percent last year and the operating margin grew by 4.7 percentage points to 22 percent.

Bellettini is confident the label will continue to thrive under Vaccarello, whose first collection was for spring 2017. The designer is building on a core of house icons — tuxedos, animal prints — and giving them his own glamorous spin, with signatures like oversize sleeves and metallic fabrics.

“It’s very important to have, for people, these anchor products that they recognize as iconic for the brand,” Bellettini said. “What is going to happen is that more and more you will have a move of all of the product categories into the new aesthetic of Anthony, but very, very naturally.”

The executive was sufficiently impressed by Vaccarello’s work for his own label and for Versace’s Versus line that she did not meet with any other candidates. “Anthony has an incredible understanding of the DNA of the brand,” she said, adding that his collections have been well received so far.

“The launch in the stores is super good and the result of this last campaign with the last show went beyond any expectation I could have, so I am very happy, because when that happens, it means that the momentum of the brand is still there very organically,” Bellettini said.

Vaccarello has brought buzz — both good and bad — to Saint Laurent, which has been home to top industry talents including Alber Elbaz, Tom Ford and Stefano Pilati since founder Yves Saint Laurent handed over the reins of the Rive Gauche rtw line in the late Nineties. The legendary couturier died in 2008.

Images from Vaccarello’s spring advertising campaign triggered the ire of France’s advertising watchdog, which asked Saint Laurent to modify the visuals after receiving a number of complaints that they featured allegedly “degrading” images of women.

But his second collection, shown in February, yielded a big hit in the shape of a bejeweled, rhinestone pair of slouch boots that was snapped up by Rihanna and has already amassed wait-lists at U.S. department stores Saks Fifth Avenue and Bergdorf Goodman, according to the retailers.

“It’s absolutely insane what happened with that boot, which we love, because it’s really the expression of aspiration,” Bellettini said. “Everything is in there and when this happens, it’s magical to see, because it becomes an emotional touch point.”

Creating that emotional connection will be key as the brand develops its online reach. Since Vaccarello arrived in April last year, its Instagram following is up 300 percent to 1.7 million, but Bellettini admits Saint Laurent is still at the start of its digital journey.

“We will have to become a little bit more loose, because we are control freaks, while in the digital space there is a lot of other people’s opinion or way to express themselves. So we are approaching it in a cautious way, because we want to be sure that whatever we do doesn’t damage our brand image and brand equity,” she added.

François-Henri Pinault, chairman and ceo at Kering, has said the group plans to ramp up spending on digital communications in 2017 as it seeks to court Millennial consumers, while capping investment in new stores. Saint Laurent is enhancing its e-commerce site and beefing up online content.

“If you want to approach digital, you need to have a digital mentality — and the beauty is that Anthony has it,” Bellettini said. “Since his arrival, he has already done seven campaigns.”

Indeed, Vaccarello produced a campaign before showing a single design, and has kept up the flow of images with advertising images lensed by American artist and fashion photographer Collier Schorr and moody videos directed by Nathalie Canguilhem.

Dealing with the public’s response is just part of the deal.

“Like it or not, there is something very emotional with this brand and when you live inside the brand, you really feel it. Everybody has something to say about Saint Laurent,” Bellettini said. “It means that you need to be very strong with your ideas and opinions, because you risk being diverted all the time. But I love it, because this creates tension and emotion.”