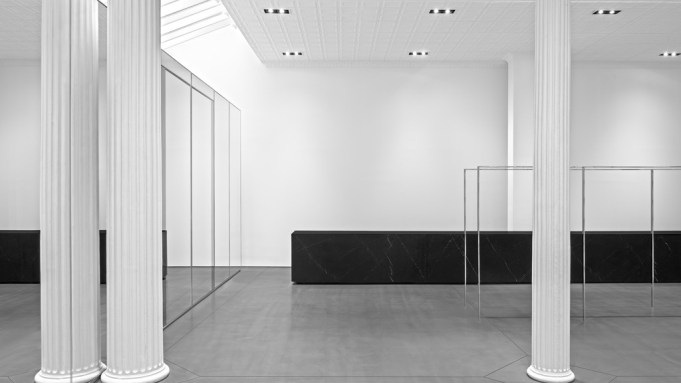 The brand operates an uptown store on East 57th Street, and now it’s opened one downtown, in SoHo. Brant Cryder, president of the Americas for Saint Laurent, calls the units “two halves of the whole new story we want to tell.”

Cryder explained the personalities of the two New York stores, comparing the 57th Street flagship’s luxury to the couture house of Yves Saint Laurent, founded in 1961, and the Greene Street unit to Yves Saint Laurent Rive Gauche, a now-defunct label launched in 1966, with the arty and bohemian threads that run through SoHo.

The company has an ambitious expansion and renovation program. The East 57th Street flagship will be remodeled next year, while a store on Rodeo Drive in Beverly Hills is in the process of being renovated. “We’re really excited about telling the other [luxe] part of the new story,” Cryder said.

So far, Slimane’s new retail design can be seen in the U.S. in four in-store shops at Bergdorf Goodman and Saks Fifth Avenue and new stores in Bal Harbour, Fla., Dallas and Short Hills, N.J. The brand has been absent from the Chicago retail scene for several years, but in the fall will open a store on Rush Street. Also in the fall, the first men’s store in the U.S. will bow on Post Street in San Francisco.

Latin America is a new market Saint Laurent is exploring. “That’s completely untouched for us,” Cryder said. São Paulo and Mexico City are under discussion. Any launches would begin in late 2014.

“All the projects are done individually,” Cryder said. “East 57th Street [when renovated] will have an uptown vibe. It will be the next level of luxury.”

Not that the Greene Street store is too shabby. Furniture consists of vintage pieces by Jean Prouvé, Marcel Breuer and other modernists. The walls on two sides of the store have been enhanced with white marble panels and shelves with inset LED lighting. One displays Slimane’s handbags, such as the Betty, the Duffle and the Sac du Jour, $2,550 for a small bag in leather and $28,500 for crocodile.

About two-thirds of the store is devoted to women’s products. Men’s wear and men’s accessories and shoes are in the back third. Towering glass fixtures consisting of horizontal and vertical rectangular boxes lit from within highlight individual products, from ready-to-wear to jewelry. Besides some spectacular pieces, most of the rtw is from the permanent collection of “perfect tuxedo jackets, perfect leather jackets, etc.,” a spokesman said. “We’re introducing pre-fall in the U.S. this week.”