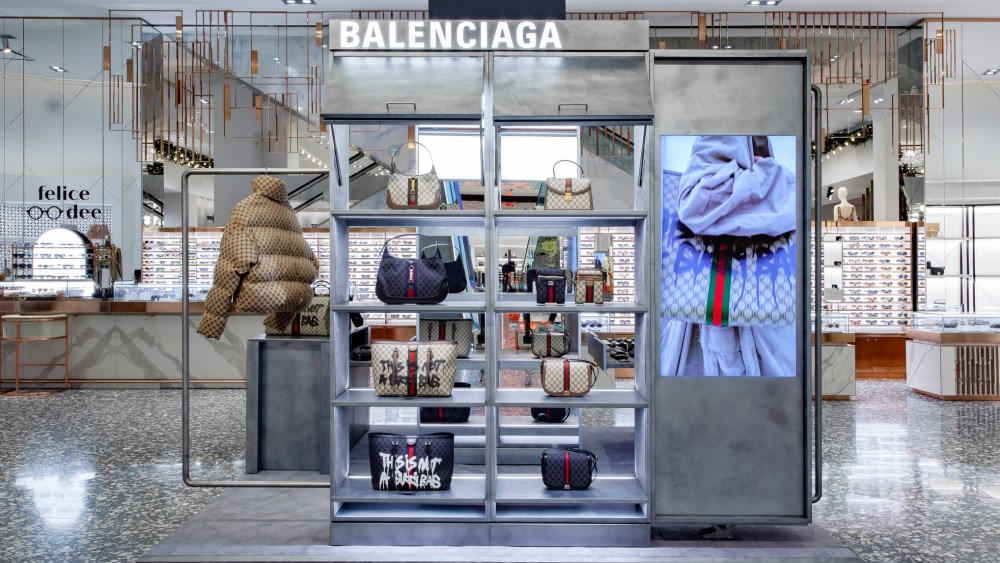 Balenciaga has dropped Part Two of its highly anticipated Hacker series, with Saks Fifth Avenue as the exclusive wholesale partner in select cities in the U.S.

Saks and Balenciaga have collaborated on a series of Hacker pop-ups inside Saks stores in New York, Houston, Atlanta and Troy, Mich., where customers can for a limited time shop the collection, which includes women’s and men’s ready-to-wear, handbags and accessories.

The Saks x Balenciaga Hacker Project pop-ups will be live in Saks’ New York and Houston locations from today through Dec. 15 on the main floor, and in Saks’ Atlanta and Troy locations from Dec 15 to Jan. 15.

Balenciaga and Gucci  introduced the Hacker Project during their spring 2022 shows, with Part One — the Gucci series — introducing cross-branded Gucci merchandise that featured the Balenciaga signature. Part Two — the Balenciaga series — combines Gucci codes like its enduring colorways, luggage details and logo patterns, with recognizable Balenciaga structures and styling throughout the merchandise.

As reported, for the Hacker Project, Demna Gvasalia, creative director of Balenciaga, zeroed in mainly on the Florentine house’s iconic GG monogram canvas — which dates back to the ’60s, and transformed it with double-B logos. These appear on a range of bags that are otherwise near ringers for the Gucci ones. With humor and a wink to René Magritte, Gvasalia spray-painted “This Is Not a Gucci Bag” on the largest tote. There are also small leather goods, caps, BB-buckled belts and scarves as part of the series.

Tracy Margolies, chief merchandising officer at Saks, said, “We’re thrilled to  partner with Balenciaga on the Hacker collection pop-ups to showcase one of the most anticipated collections of the year. Saks always strives to bring unique products to our customers and we expect the response to exceed our expectations.”

Globally, the Hacker project will be introduced in 74 physical spaces worldwide with Balenciaga pieces that reinterpret Gucci codes.