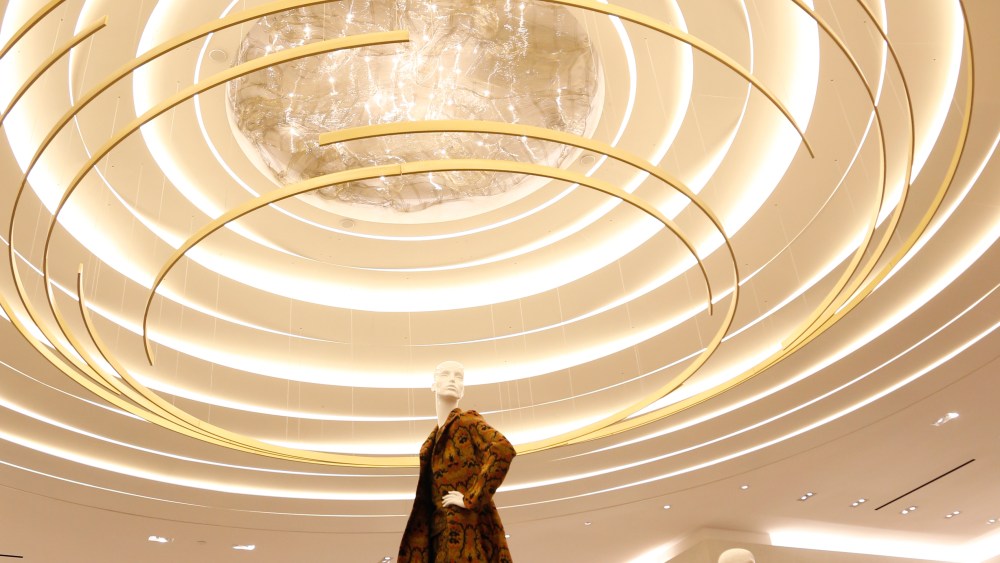 NEW YORK — After being under wraps for ten months, the Saks Fifth Avenue flagship on Monday unveiled a reimagined fourth floor merchandised with plenty of designer shops, while retaining a sense of spaciousness and consistency of tone.

“What we have done on four really reflects the level of change coming to the flagship,” Marc Metrick, president of Saks, said during a tour of the space with his chief merchant Tracy Margolies. “The mission was to really go after how the customer is shopping, and to change her experience at Saks.”

“It’s customer-centric, very open, much more comfortable and easy to shop. We have opened up the whole floor,” said Margolies.

There’s a cohesion to the phalanx of designer shops which integrate with a Saks aesthetic rather than compete with it. The setting is softened by some sophisticated decorative features — touches of metallic fabric treatment on the ceiling, stone aisles and textured plaster walls, and an extensive use of mannequins and visual cues like a center dome with a hanging sculpture of concentric gold circles. There’s a degree of elegance without being overdone. “It feels like Saks,” Margolies said.

A wide main aisle flanked by two smaller aisles, extended sight lines, and windows overlooking Fifth Avenue and Rockefeller Center that have just been uncovered will help draw shoppers through the entirety of the floor with greater ease than before.

To create the floor, Saks’ store planning and design teams collaborated with Gensler, the architecture, design and planning firm. Michael M. Gatti, principal at Gensler, said the windows and the dome area are “two feature elements that become signatures.”

“Opening up the floor was key,” Gatti explained. “We had to rework all the stockrooms on the perimeter” to create the personal shopping space and expose the windows. “The floor was a loop before, with the fitting rooms in the middle. Now the middle is selling space.”

For the most part, the floor is merchandised by designer shops, with those for Marc Jacobs and Michael Kors front and center. On the east, or tower side, of the building are shops for Burberry, which has a scarf bar and will offer trenchcoat monogramming; Altuzarra, which is new to Saks, Moncler, and Jason Wu’s first shop concept. Akris Punto, Elie Tahari, Lafayette 148, Etro, Marni and Brunello Cucinelli are also among the shops on four.

By the atrium, there’s the “Lab” merchandising a revolving array of designers providing “a lifestyle sensibility and sense of discovery” for shoppers, as Margolies said. Currently, such designers as Prabal Gurung and Mary Katrantzou, exuding a penchant for embellishment, color and day-to-evening looks, are on display.

The overall redevelopment of the flagship will impact most of the 92-year-old site, situated between 49th and 50th Streets. It’s geared to create “dominant” assortments, remerchandise to catch up to changing shopping habits and “de-departmentalize” the department store, as Metrick has said.

It’s also about providing greater vertical transportation and easier shopping and enhancing visuals so visitors explore more of the store. The project is resulting in some shifting of designers to different floors, because when all is said and done, Saks will have three designer ready-to-wear floors — on three, four and five, instead of four.

While the fourth floor is a big component, more daring store design and structural changes are ahead, including relocating beauty on the main floor to the second level and punching a hole in the main floor down to what will be a new fine jewelry department called The Vault. Saks is also adding L’Avenue, a famous restaurant from Paris; a Champagne bar; an outdoor terrace, and what might be the most visually dramatic element, a glass elevator with a grand, 23-foot-high spiral staircase wrapping around it to transport shoppers from one to two and down to the concourse for jewelry.

Saks’ flagship accounted for more than $700 million in sales in 2014 and about $1,700 in sales per square foot. It’s believed that executives see the flagship as capable of topping $1 billion in sales, though they don’t publicly discuss volume or productivity levels. The main floor and 10022-Shoe floor have been the most productive levels, though at one time, Saks’ fourth floor was a powerful destination for bridge resources, generating over $2,000 a foot with such brands as Tory Burch and DKNY, according to sources. Though bridge isn’t what it used to be.

Some of level four is still under construction including a Derek Lam shop and a fur concession operated by Birger Christensen.

The next big change will be the opening of a new fifth floor for contemporary brands, expected to be completed next February. Subsequently, the third floor, which houses such labels as Céline, Victoria Beckham, Azzedine Alaïa, Stella McCartney, Chloé and Alexander McQueen, will also be redone.

With any designer floor, typically there’s plenty of negotiating and politics involved with determining where to situate the shops. But in the case of Saks’ level four, the process would have been eased somewhat since, in addition to access from the elevators and escalators by the atrium, for the first time there is a staircase connecting levels three and four by the personal shopping area on the west side of the store.

“There are no bad positions on this floor,” Metrick noted.