Celebrating the work of late Fulvia Visconti Ferragamo, the physical exhibition is also accessible online through a virtual tour.

The Seta exhibit at Museo Salvatore Ferragamo in Florence.

MILAN — The latest exhibition mounted at the Museo Salvatore Ferragamo location in Florence is a tribute to the late Fulvia Visconti Ferragamo, who died in 2018. One of the daughters of Salvatore Ferragamo, founder of the namesake luxury company, she was creative director of men’s and women’s silk accessories — including foulards and ties — core businesses of the house, along with shoes and handbags.

Simply dubbed “Seta,” or “Silk” in English, the exhibition aims to spotlight archival pieces in the category, highlighting the key contribution Visconti Ferragamo made to enhance the brand’s identity, as well as to explore this segment’s cross-pollination with other products and artistic disciplines.

Unveiled digitally on Thursday in the presence of Visconti Ferragamo’s siblings Giovanna and Leonardo Ferragamo, as well as her daughter Angelica Visconti, the exhibit will run through April 18, 2022.

Although museums are closed in Italy as part of the restrictions to contain the spread of COVID-19, the Ferragamos underscored they wanted to proceed in hosting a physical exhibition to telegraph a message of hope and continuity.

“It’s a brave choice, one we discussed a lot about internally,” said Leonardo Ferragamo. “This exhibition had been ready for a long time and was supposed to be launched last year. So we didn’t wanted to wait any further also because we wanted to spread a message of not stopping culture.”

To this end, the exhibit will be accessible online through a virtual tour complemented by guides in Italian and English on the museum’s website. “It’s not the same, but today these digital tools enable us to continue to promote culture in different ways,” he added. Moreover, to further increase access to the project, a documentary on the show will air on the television channel Sky Arte starting April 29.

Ferragamo didn’t forget the emotional, family bond to the initiative. “Fulvia was a point of reference for this company, she always stood out for her energy, positivity, great tenacity and determination. She was very — and constantly — creative, since an early age,” he said, recalling how his sister used to create little jewelry pieces when she was a young girl.

Giovanna Ferragamo, who is also president of the Fondazione Ferragamo, traced the launch of the company’s silk accessories category back to the early 1970s, which she witnessed by working closely with her sister.

“I have seen the creation of each piece, one by one…and transferred many of Fulvia’s designs in my own sector, which was apparel. It was very important for us, because in this way we consolidated a real Ferragamo identity,” she noted, adding that she considers herself “very lucky to have had two sisters, both extraordinary, and to have shared these moments of creativity with them,” in a reference to her eldest sister, Fiamma, who died in 1998.

In particular, Visconti Ferragamo’s work was highly inspired by nature, botanical species and animals populating exotic landscapes, jungles and fantastic savannas, which were depicted in lively colors on the silk pieces. 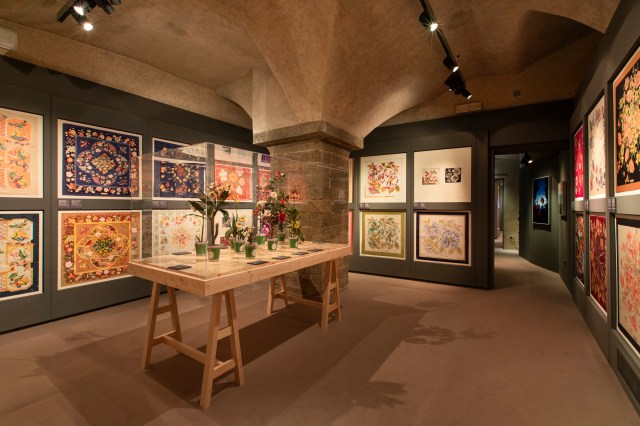 Curated by Stefania Ricci and conceived by Judith Clark, the exhibition not only focuses on the finished products but explores the inspirations and references behind each print, featuring sketches and collages Visconti Ferragamo put together during her creative process.

Ricci, who is the museum’s director, said it took more than three years to prepare the exhibit. “In our archives, we had all the scarves but also 1,065 albums containing mood boards under the form of collages, made of objects and paper cuts of illustrations,” she added, underscoring Visconti Ferragamo’s curious approach, fueled by many trips during which she collected volumes and souvenirs she referenced in her work.

These inspirations defined most of the show’s thematic areas, including rooms dedicated to flowers, animals, Asian references and the house’s iconic shoes, which became a recurrent motif in silk prints after they were the focus of an exhibit at Florence’s Palazzo Strozzi in 1985. 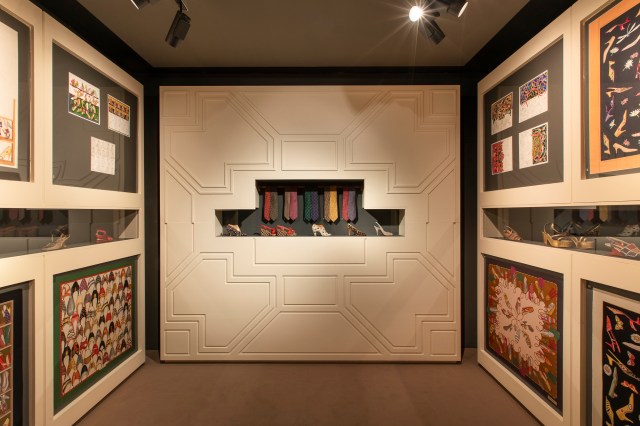 A section dedicated to the influence of silk accessories on ready-to-wear showcases key looks from the ’70s onward, while throughout show artworks developed in collaboration with contemporary and emerging artists are displayed. These include a site-specific installation by Chinese artists Sun Yuan and Peng Yu entitled “Were creatures born celestial?” that conceptually captures how the Silk Road has long been fertile ground for exchanges between East and West.