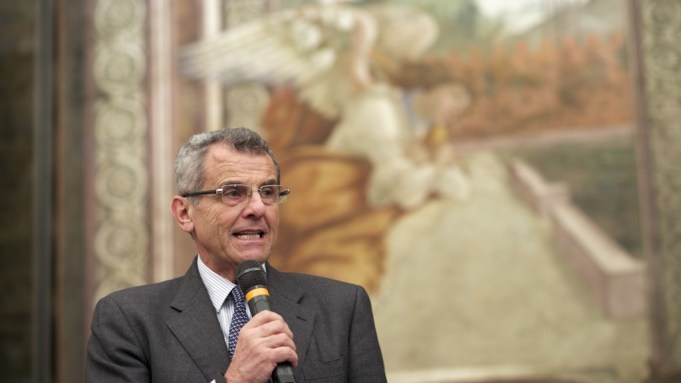 FLORENCE — Hardly anything else could have been more fitting than Sandro Botticelli’s 15th-century “Annunciation to Mary” as a backdrop to the disclosure on Monday that the Salvatore Ferragamo Group has pledged to donate 600,000 euros, or $826,140 at current exchange, to renovate eight rooms at the Uffizi Gallery.

The support will enable the Florence museum to reopen the rooms within a year and display about 50 works dating back to the 15th century, mainly by masters including Filippo Lippi, Luca Signorelli, Domenico Ghirlandaio, Pietro Perugino and Piero di Cosimo.

The Ferragamo family was proactive in seeking an opportunity to give back to the city. “We wanted to do something that would improve the city, to contribute to the Uffizi and Florence, and we were looking for a project that would be long lasting,” said president Ferruccio Ferragamo during a preview walk-through of the Uffizi Gallery spaces that will be remodeled. “We asked [superintendent to the historic and architectural patrimony and of the organization that manages Florentine museums] Cristina Acidini, and this fits our objectives.”

During an earlier press conference at the former San Pier Scheraggio church where the Botticelli fresco was displayed, Acidini underscored that Ferragamo’s was not a sponsorship but said this was a “liberal disbursement,” a legally drawn-out form of bestowal of funds that does not include any benefits, in terms of marketing or communication. Acidini said this kind of support was entirely different from the sponsorship of the renovation works on the Colosseum, underwritten by Tod’s and its chairman and chief executive officer Diego Della Valle — although she never named the entrepreneur or the company. “With a liberal disbursement, communication is left to the administration and we wanted to make it known, as an encouragement and an example,” Acidini explained, noting the natural association with the Ferragamo family, given the “vicinity” and “deep roots” in Florence.

The eight rooms of the Uffizi must be refitted, repainted and relit as part of the new remodeling of the museum. The funds will help upgrade the air treatment and security systems with advanced technologies. Acidini proudly said that since 2011, the Uffizi has expanded from 47 rooms to 102 “without ever closing,” and that 377 works of art were brought to light from storage and exhibited, redistributed in the newly restored spaces.

“They have never sought restoration projects that were too ostentatious,” Stefania Ricci, curator of the Salvatore Ferragamo Museum, said of the family.

Over the years, the Ferragamo family has helped restore other relevant sites in Florence, including the door of the Santa Trinita church, near the company’s Palazzo Spini Feroni in Via Tornabuoni, or the Column of Justice sculpture in piazza Santa Trinita. Ferragamo was also a partner of the Polo Museale Fiorentino’s educational division in its 2013 Fairy Tale Museum program for families.

Two years ago, the company was the sole sponsor of the exhibition “The Saint Anne, Leonardo da Vinci’s Ultimate Masterpiece” at the Louvre. In fact, Ferruccio Ferragamo said the family “first started conceiving [the Uffizi project] at the Louvre. We said, ‘Why not something in Florence?’ We wanted to do something significant for the city that welcomed our father in 1927. In our job, we try to work as best we can, hoping we won’t be copied, but in this case we hope we will be copied.”

Just how relevant this project is to the family was clear by the attendance; in addition to Ferruccio, Fulvia, Giovanna, Leonardo and James Ferragamo, there was Diego di San Giuliano, company ceo Michele Norsa and creative director Massimiliano Giornetti. The designer hosted a lunch at the 13th-century Palazzo Fini Speroni, where the dining salons were fittingly decorated with Botticellilike flower arrangements.