The new Dior women’s boutique in San Francisco pays homage to the old and new. 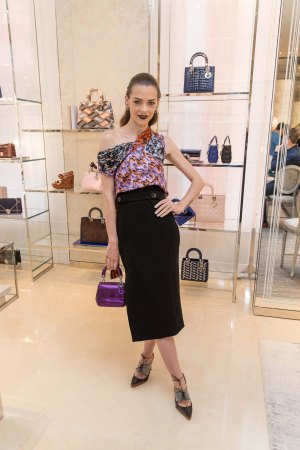 SAN FRANCISCO — The new Dior women’s boutique here pays homage to the old and new, starting with the exterior of the building itself. The facade at the corner of 185 Post Street is encased in a glass curtain, as if it’s being preserved.

It’s always a mix of feminine and soft with modern utility, said model and actress Jaime King, who came to town to celebrate the opening with her husband, director Kyle Newman.

She would know; King, who turns 37 on Saturday, said she’d been working with the house since she was 14, and was there for all the John Galliano shows. The new two-floor women’s boutique opening in one of her favorite cities (she would live in San Francisco, if she could, she said), was very French, with extreme romanticism and attention to detail. She pointed out the Pisces constellation, twinkling in lights in the ceiling of the fine jewelry and watches salon; Dior himself was a Pisces.

To be sure, although the exterior and the prime downtown location are spectacular, Katie Traina agreed that the “the inside does not disappoint.” The San Francisco style set was certainly eager to see it; less than an hour after the doors opened to the party, the fire marshal paid a visit to ensure that the doormen didn’t let more people in.

Those who managed to make it through included Anne V, designer Andrew Gn (who had a trunk show in the city earlier in the day), former Mayor Willie Brown and the familiar patrons who came to both show off their Dior shoes and bags and to perhaps do a bit of shopping, as a portion of sales from the evening and the following day went to benefit the Fine Arts Museums of San Francisco. Traina said she planned to come back when the store wasn’t so crowded.

Husband Todd Traina, a film producer, said the mirrored staircase, created with a video art wall by artist Oyoram, was like something seen in a Wes Anderson film. He also made a point to recommend that Dior make an appearance at tech-world destination Burning Man, an otherworldly desert festival filled with billions and artists; in other words, oh so Dior.