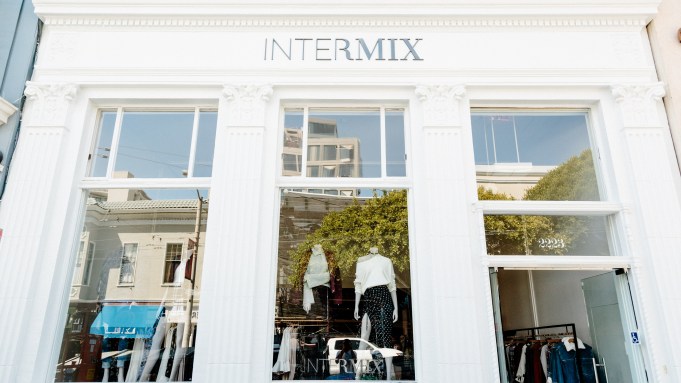 Almost four years since its acquisition by Gap Inc., the retailer opened a store in its corporate parent’s hometown Thursday.

The trendy multibrand retailer, which is headquartered in New York, isn’t totally new to the Bay Area. And it arrives with the cushion of considerable brand awareness that comes from a store in Marin (to the north) and in tech-centric Palo Alto (to the south). President Jyothi Rao said data gleaned from its e-commerce arm shows that Intermix has a robust client base in San Francisco.

Intermix made its San Francisco home at 2223 Fillmore Street in the city’s posh Fillmore District, which is a particularly attractive area, with affluent residents from a range of demographics, including tech-flush transplants dressing for IPO parties, plugged-in international tourists and moneyed Pacific Heights moms.

The chain is also adding doors in Hawaii and in Miami by year’s end, bringing its total to 43, up from 32 when Gap bought it for $130 million in January 2013.

Intermix took its time in coming to San Francisco.

“We were looking for the perfect location, because we were very picky and careful about where we wanted to be,” said Rao, who joined Intermix in 2014. (Founder Khajak Keledjian left the company over a year ago, according to a source).

The Fillmore neighborhood, which is home to Rebecca Minkoff, Marc Jacobs, Rag & Bone and most recently SpaceNK, is notoriously tricky, because it doesn’t welcome businesses that are perceived as “chains.”

Intermix’s offering, store design and marketing is increasingly targeted to the local customer. The Fillmore store’s assortment will be different than the lineup in Marin or Palo Alto. Rao said the San Francisco vibe has an “elevated, cool and feminine” point of view with more edge that will complement staples such as denim and woven shirts. It will be the first on the street to carry brands such as Cinq à Sept, Barbara Bui and Caroline Constas, Rao said. Prices range from $60 to $2,640, and the average price is approximately $400.

The actual store is “very small — a beautiful jewel box,” Rao said. It’s about 2,500 square feet, with details such as crown molding, brass and marble. In addition to a redesign, Intermix commissioned a hand-painted mural from local artist Kelly Ording.

Despite choppy waters at Gap Inc. in recent years — sales have been consistently down and the company closed its Piperlime business in 2015 — Rao sees incredible potential for growth for Intermix both in stores and online.

She emphasized the personal styling services of its boutiques, adding that customers can make a stylist appointment on the web site or have items shipped from other stores. In the corporate office, the merchandise is treated as “one pool of inventory,” and very few of the 100 or more employees are dedicated specifically to stores or e-commerce. This, Rao said, simply reflects how the client looks at the brand. “I very much believe in stores, but not in a huge expansion of the store fleet.”

At a time when experimental in-store technologies have reached fever pitch — smart mirrors, heat-tracking cameras, robot assistants and the like have become all the rage — she said investing in the retail experience isn’t just a matter of technology.

“I believe in leveraging technology in a way that is meaningful to clients that gives them a better experience and helps them achieve what they are trying to achieve,” she said. “It’s not about getting wrapped up in whatever the next hot thing is that everyone is thinking about. If your clients don’t care about it, you’re just wasting money and time.”

And as much as she respects Amazon, which is the clearly established e-commerce leader, she likes to think of Intermix as the opposite. “We are the anti-endless aisle, and our value proposition is entirely different.”

While the acquisition of the relatively small Intermix was a head-scratcher to some, the chain serves as something of a low-risk incubator for testing retail concepts.

For instance, Intermix’s store in New York’s Meatpacking District unveiled a project this month called “Next Big Things,” which stocked goods from emerging fashion talent in an adjacent space, including handmade shoes by Malone Souliers and “envelope-pushing” silhouettes by Beaufille.

“We can write the playbook on what pitfalls to avoid, yet we get to adopt technologies that we might not get to afford as a standalone business of our size,” said Rao, who’s shying away from incessant promotions that plague retail in favor of personalization.

­­“Department stores are struggling, and they will become more real estate companies than retailers over time,” Rao said. “It’s hard to get a personal experience, and pure-play retailers don’t have stores. And we can provide that.”