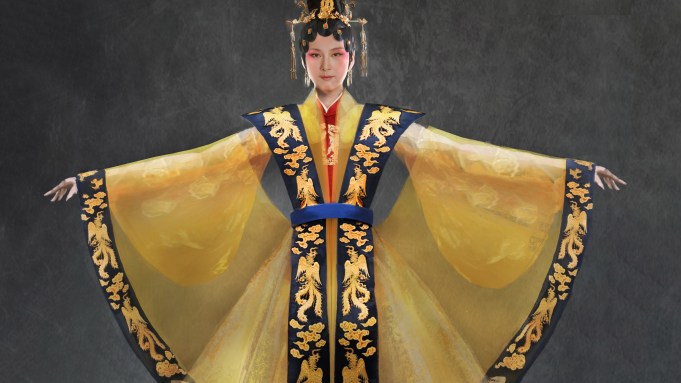 When the curtain rises on San Francisco Opera’s world premiere of “Dream of the Red Chamber” on Saturday, audiences will get a taste of Oscar-winning art director and costume designer Tim Yip’s vision of the “New Orientalist” style.

Yip, best known for his work in film, won the 2001 Academy Award for art direction for “Crouching Tiger, Hidden Dragon” and a BAFTA award for the movie’s costume design.

“This is an exciting chance for me to expose the beauty of Chinese art and style in a new-generation way, by which I mean fresh, not stuck in the past, or dated,” Yip said by telephone from his Beijing studio. “In my ideal world, tradition doesn’t mean re-creating stitch-by-stitch ‘the past.’ This is my opportunity to portray an updated classical style, accessible to modern audiences.”

Opening at the San Francisco War Memorial Opera House, the lavish production is based on the six-volume novel, “Dream of the Red Chamber” by 18th-century Qing Dynasty writer Cao Xueqin. The opera depicts a mythical love triangle between a rich young nobleman and two women from noble families, who may or may not be incarnations of heavenly creatures. This new adaptation was brought to life by composer Bright Sheng, the librettist David Henry Hwang and director Stan Lai.

Yip spent months studying the original novel and immersing himself in the culture, art and silhouettes of the period. His costumes include symbolic crimson gowns, diaphanous green robes and multilayered golden gowns for the women.

The vibrant colors were reserved for the noble characters such as Daiyu, one of the two female leads, who wears multilayered costumes made from every shade of green, to create her mystery. Baochai, the other female lead, is an idealized character, described by Yip as “clever and rational and representing a different tradition of beauty.” He made her costumes elegant and simple in white and gold to depict an idealized poetic purity and higher ideals.

For the men, he sculpted elaborate armor with gold knee plates and embellished leather straps, the hyper-masculine costumes meant to depict the power of the emperor. But across cultures and time periods, some things are familiar: Imperial costumes have more gold, Army officials dark green and monks in the so-called realistic world wear brown or gray. “Gray is the basic color of sad reality,” adds Yip.

More than 150 costumes for the production were crafted in San Francisco Opera’s costume studio, which vat-dyed over 700 yards of fabric. Other techniques included laser cutting leather to create rhinestone-embellished hair ornaments, pleating more than 60 yards of fabric and custom-embossing over 700 square feet of leather for armor.

Yip’s production design floats between poetry and sadness with a real/surreal motif. “I try different things in each production. Sometimes more futuristic, sometimes based on historical reference. In this opera, I kept traditional ideas as a base, and extended that to the level of a dream. So it is half historical, half imagined.”