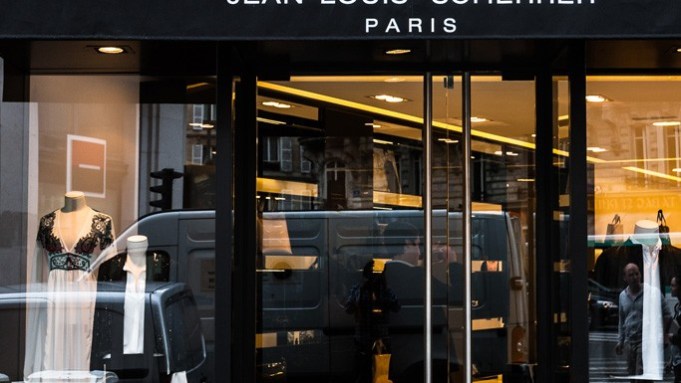 “We are reawakening the dormant couture house,” said JSB’s chief executive officer Bruno Bensoussan, who noted the house will now focus on ready-to-wear. His 25-year-old daughter Candice, an Esmod graduate, is the new designer of the brand.

The 1,615-square-foot store showcases the rtw and licensed products including eyewear, fragrances and watches.

The design is inspired by Scherrer’s former Avenue Montaigne flagship, which was the brand’s last store and was closed in 2009. Created by French architecture firm K&Y, it has black-and-white lacquer furniture and mirrors.

Founded in 1962 by the couturier of the same name, Scherrer’s fashion house that counted Jackie Kennedy and Claudia Cardinale among its clients was known for its leopard prints and cocktail dresses.

The new rtw collection remains true to the brand’s DNA, according to Bensoussan. It includes embroidered cocktail dresses, priced at 2,200 euros, or $2,980 at current exchange, as well as caftans. “We have a product that is very appealing to a Middle East and Asian clientele,” Bensoussan said. The brand plans to stage a rtw show in 2015, he added.

The group is also looking to open a second store on the Left Bank, and eyeing locations in London and Milan.

In remembrance of Jean-Louis Scherrer, who died on June 20, 2013, a mass is scheduled for Friday at the Saint-Germain-des-Prés church in Paris at 5 p.m. Central European Time.