The house’s ceo, Delphine Bellini, plans to expand distribution of the exclusive collection in 2019. 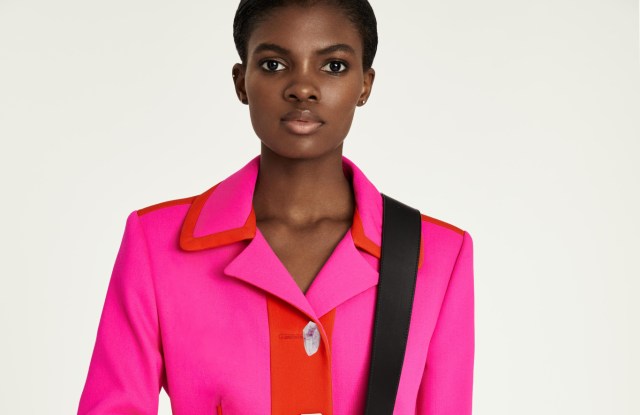 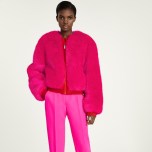 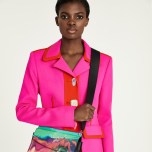 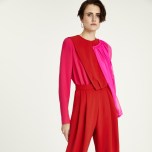 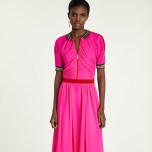 PARIS — Schiaparelli has unveiled the second chapter of its ready-to-wear line as it gears up to expand distribution of the collection, available exclusively at its Place Vendôme headquarters and Bergdorf Goodman in New York.

Story Number Two, dubbed “The Pink Victory of Schiaparelli,” features a blend of sportswear and more formal pieces in variations on the shade that Schiaparelli herself dubbed “a shocking color, pure and undiluted.”

“That cape was a phenomenon,” said Delphine Bellini, chief executive officer of Schiaparelli. “I think it’s the most requested piece from any of our collections in terms of editorial. We haven’t seen it since the show.”

While the parka was one of a clutch of made-to-order pieces, the collection itself focuses on sporty items, with a wink to Nike, the ancient Greek goddess of victory. A striking photo print spliced images of Hellenistic statues — including one wearing an American football helmet — with house symbols such as a heart-shaped locket.

Bellini noted that unlike Christian Louboutin’s signature shade of red, Schiaparelli pink actually comes in a variety of shades. “When you look at the archives, that shocking pink was never the same because [Elsa Schiaparelli] was not bound by any defined system, instead evolving in tune with her intuition,” she explained.

“We have a reference shade, but it can be more or less fluorescent, more or less fuchsia — it depends a lot on the material,” Bellini added. She noted the color works well for merchandising, a case in point being the Bergdorf pop-up, where the new collection will go on sale on Dec. 14, replacing the Man Ray-themed debut line.

The so-called “prêt-à-couture” collection, on which Sarah Andelman and Katie Grand acted as consultants, is priced from 400 euros for a T-shirt to around 5,000 euros for a tailored jacket with novelty buttons.

“In 2019, we aim to continue raising the visibility of these Stories,” Bellini said, adding there is no set timetable for releasing new chapters, which could also consist of single products or collaborations with artists. “We will continue to deploy the line commercially in a controlled and exclusive way, targeting new territories.”

Bellini favors the pop-up concept, for which she has developed tall trunks that can accommodate different product categories alongside custom-made design elements. Among the house’s other plans for next year is a collaboration with the Paris Opera on its 350th anniversary gala on May 8.

After that, Bellini plans to turn her attention to perfumes, the third prong of a strategy that began five years ago with the revival of the house’s couture activities, and entered its second phase in September with the launch of rtw and the label’s first handbag, the Secret.

“The third phase, naturally, will be to work eventually on the launch of perfumes,” she said, adding that talks are under way with the label’s owner, Italian entrepreneur Diego Della Valle, on how to revive the division that produced scents such as Shocking, launched in 1937; Zut, and Succès Fou.