With an exhibition opening this week at the Costume Institute and a business development plan in place, the storied fashion brand is ready for a comeback. 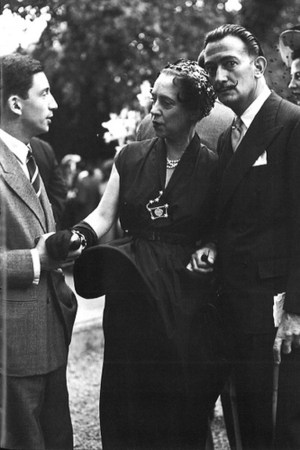 PARIS — The storied fashion brand Schiaparelli is ready for a comeback, with an exhibition opening this week at the Costume Institute at the Metropolitan Museum of Art, and a business development plan finally ignited by Schiaparelli’s owner, Italian business titan Diego Della Valle.

WWD has learned that Della Valle has tapped Paris fashion personality Farida Khelfa to be the spokeswoman for Schiaparelli, which will be headquartered here at 21 Place Vendôme. Khelfa is expected to attend the Met gala tonight dressed in vintage Schiaparelli.

Della Valle is searching for a designer, and is aiming to name the new person in September. The first products are slated for introduction in February, with an emphasis on accessories, fragrances and cosmetics, along with some clothing.

The entrepreneur, head of Tod’s SpA, quietly bought the trademarks and archives of the late Paris couturier in May 2006, and since then has frequently described it as a future project. The acquisition was made through a personal holding, Diego Della Valle & C. S.A.P.A.

It’s an opportune time to activate the business, given the exposure promised by the “Schiaparelli and Prada: Impossible Conversations” exhibition at the Costume Institute. It opens to the public on Thursday and runs until Aug. 19.

“The idea with Schiaparelli is to propose the brand with all its modernity, and represent dreams, art and all the most sophisticated things we can do,” Della Valle told WWD. “This brand doesn’t have to get involved in the frenetic world of numbers, accounts and dimensions, but it just has to express itself at its best. The heart of this project will be the Parisian maison in Place Vendôme, in the original location where the first atelier was.”

Although Schiaparelli is often characterized as a brand for fashion cognoscenti only, Della Valle said consumers would appreciate the modernity of her creations and be captivated by “the magic world she had created.”

Born in Rome in 1890, Elsa Schiaparelli was seen as a key rival of Gabrielle Chanel, known for designs heavily influenced by Surrealist art, such as her Shoe hat and Tear dress. She closed her Paris house in 1954 and died in 1973. The Met expo is to showcase about 90 fashion designs and 30 accessories by Schiaparelli.

Schiaparelli said Khelfa, a popular and ultrachic figure on the Paris fashion and social scenes, embodies the artistic eccentricity of the founding designer, with a flair for the avant-garde.

She is probably best known as a muse for designers Azzedine Alaïa and Jean Paul Gaultier in the Eighties and beyond. She played multiple roles at those houses — model, press attaché, couture director — and figured prominently in a recent exhibition at Les Arts Décoratifs here devoted to the work of graphic designer and photographer Jean-Paul Goude.

Khelfa has segued into film, playing roles in a number of mainly French productions and, more recently, trying her hand on the other side of the camera, directing documentaries about Gaultier and the young people in the Tunisian revolution.

The Schiaparelli revival arrives at a time when fashion rebirths are a hot topic.

In December, French luxury kingpin Bernard Arnault opened a flagship on the Rue Saint Honoré for Moynat, a trunk-­maker founded in 1849 and dormant for decades. Fauré Le Page, a famous gunsmith established in Paris in 1717, is readying a boutique to open on Rue Cambon later this year. And French entrepreneur Arnaud de Lummen has in his possession a bouquet of heritage brands he intends to sell or relaunch with partners. These include the couture name Mainbocher and storied footwear name Herbert Levine.