Scores of Designers Gather for the 2009 CFDA Party

Designers, including Isabel Toledo and Carolina Herrera crowded the Rooftop Gardens at Rockefeller Center to hear the list of the CFDA 2009 nominees.

By Rosemary Feitelberg and Marc Karimzadeh on March 17, 2009
View Slideshow 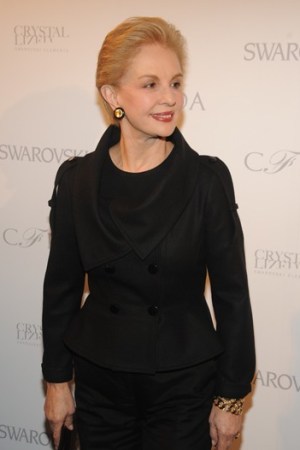 NEW YORK — Fashion, much like the rest of the economy, is going through its share of hard times, but that didn’t stop Council of Fashion Designers of America president Diane von Furstenberg from striking a hopeful note at Monday’s party to unveil the 2009 CFDA Fashion Awards nominees. “In three days, it’s spring, and American fashion is kicking,” she told the crowd. “We will surf the tsunami and do very well.”

Scores of designers, including Isabel Toledo, Carolina Herrera, Elie Tahari and Philip Crangi, crowded the Rooftop Gardens at Rockefeller Center to hear the list of nominees, which included Marc Jacobs, Proenza Schouler, Rodarte, Michael Bastian, Tim Hamilton, Patrik Ervell and Anna Sui, who is receiving this year’s Geoffrey Beene Lifetime Achievement Award. The event was hosted by Nadja Swarovski and the CFDA board.

With this year’s Board of Directors Special Tribute award going to Michelle Obama, the June 15 gala got some instant buzz. “She was on everyone’s ballot,” von Furstenberg said. CFDA executive director Steven Kolb added, “Mrs. Obama got nominated in almost every category, from Eleanor Lambert to Style Icon. The board wanted to give her a serious award. As part of the award, we will establish a grant in her name to support young talent, because she has really epitomized that.” Asked if the First Lady would make an appearance, Kolb added, “I am sure she has a lot of invitations, but we can only hope and try.”

The First Lady has so far embraced quite a few of the nominees, including Narciso Rodriguez, Jason Wu and Thakoon Panichgul. This begs the question: Who would she wear should she come to Alice Tully Hall that night? “She could root for all of us,” Rodriguez, a Womenswear Designer of the Year, said. And if she brings along her husband, the President, as her date for the evening, all the better. There will be plenty of people in the room already vying to dress him, including Menswear Designer of the Year nominee Italo Zucchelli of Calvin Klein Collection. “He is the perfect Calvin Klein man,” Zucchelli said. “He is in great shape, and so elegant.”

Toledo, who dressed Michelle Obama for the President’s swearing-in ceremony, was not about to take credit for helping propel the First Lady to fashion icon status. “We all have,” she said. “She’s really good about supporting every single one of us directly and indirectly by wearing so many American designers.” Like many in the crowd, Wu welcomed the chance to meet with friends and unwind a bit. “In these times, we need some excitement. I’ve been working all year. It’s nice to come out and hear some good news,” he said.