The 60 fashion pieces in the exhibit, which is on view through Nov. 10, are from an assortment of designers.

By Rosemary Feitelberg on May 25, 2012
View Slideshow 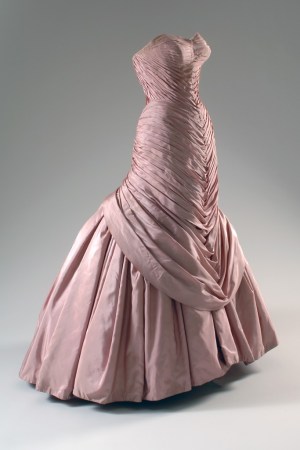 Without a doubt, part two of “Fashion, A-Z” at the Museum at FIT illustrates the adage “What’s old is new.”

A 1926 Edward Molyneux blue silk chiffon cocktail dress with sequins speaks to that, as does a 1929 pale yellow Jean Patou evening dress. The 60 fashion pieces in “Fashion, A-Z: Highlights from the Collection of The Museum at FIT-Part Two,” which is on view through Nov. 10, are from an assortment of designers. The show opens with an Adrian gown followed by a photo-printed Akris dress, a Pierre Balmain number paired with one from Oscar de la Renta for Balmain, a red Bill Blass ensemble is followed by Burberry Prorsum and so on.

The items displayed are among the 100-plus that will be featured in the “Fashion, A-Z” book due out this fall by Taschen.

To try to keep visitors’ attention focused on the clothes, there are only about 10 or 15 accessories on view. The strapless pink Charles James Tree dress is one of the main attractions at the museum, which has one of the largest collections of his pieces in the world. Meticulous as he was, James only produced 1,000 garments during his five decades of designing.

During a preview Thursday with Jennifer Farley, assistant curator of the Museum’s Costume Collection, another assistant curator Colleen Hill, who specializes in accessories, said, “Fashion insiders know James to be a designer’s designer, but he has not always been the best known designer.”

A Madame Grès evening dress from 1967 shows how the designer was experimenting with more abstract shapes by the Sixties. And a placard near the Patou dress explains how the designer visited the U.S. in 1924 to study American women since their slender, athletic frames were better suited for his clothes than their European counterparts.

Other pieces include a 1961 Arnold Scaasi cocktail dress, sash and shawl in a Liberty of London print; a 1970 Calvin Klein wool ensemble; a 1981 pirate ensemble from Vivienne Westwood; a 2011 Raf Simons for Jil Sander gown, and a 2011 Narciso Rodriguez pale pink silk charmeuse dress.

Not wanting to ruffle any feathers, museum staffers were driven largely by availability. Hill said, “We really had to base the selection on what we had available in our collection. We are not trying to say these are the best designers in the entire world.”