Since 2010, the Munich retailer’s online business has been growing by more than 50 percent every year. 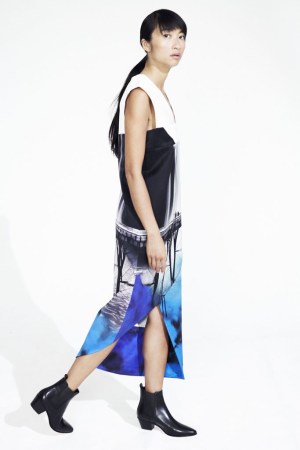 The retailer’s Web site mytheresa.com carries labels such as Balenciaga, Stella McCartney, Saint Laurent and Valentino, buying deeply into a tightly edited selection of labels. That, and its laserlike focus on customer service, has buoyed the business to net revenues of 66 million euros, or $90.8 million, in 2013.

“Our e-commerce heart beats as loud as our fashion heart,” said managing director Jens Riewenherm. “It’s not about only being superinspirational and supersophisticated in fashion, it’s also about efficiency and service.”

Since 2010, the retailer’s online business has been growing by more than 50 percent every year, according to Riewenherm, and is set to achieve sales of 100 million euros, or $137.6 million, for the current fiscal year. Earlier this year, the retailer boosted its team by appointing Paula Reed, formerly fashion director of Harvey Nichols, as creative director.

Riewenherm, who was in London with the boutique’s cofounder and chief executive officer Christoph Botschen last month, also noted that the retailer has been profitable “from Day One,” when it launched online in 2006. “We are experienced in retail,” said Botschen, who launched the online store as an offshoot of his and his wife Susanne’s brick-and-mortar store, which opened in 1987.

“We are not from publishing, we are retailers. We started in the store, and we know how to handle this business,” he said, adding that as luxury retail is “sensitive…selecting the right pieces from brands, we did not want to [bring] big equity into our company.”

Riewenherm noted that what also contributes to the firm’s bottom line is that for the luxury e-commerce sector, the average order value “is one of the highest you can find in e-commerce,” he said. Mytheresa.com’s average order basket is about 600 euros, or $825. “As we are so focused on the high-end, luxury brands [that attract] a very loyal, affluent customer,” he said.

Botschen said the store’s international clientele — only 35 percent of its business is with customers in Germany — look to mytheresa.com for its edit of labels and its “curated” product selection, which revolves around a “feminine, Continental taste.”

Unlike Net-a-porter’s broad selection of brands, Riewenherm pointed out, mytheresa.com focuses on about 180 labels but buys deeper. So in step is the retailer with its customers’ tastes, when the firm sent out an e-mail newsletter in March alerting customers to a pair of studded Saint Laurent boots, the boots, which retail for about $2,450, sold out in “two-and-a-half hours,” Riewenherm said.

As for mytheresa.com’s future growth, the retailer is looking at launching dedicated local Web sites in the Middle East — planned for later this year — and in Asia Pacific and Australia, along with a hub in Asia to offer customer service in those territories, forecast to open at the end of 2015. The retailer already allows customers in those territories to pay in local currencies, but the language is currently in English. Following the launch of sites dedicated to Italy and France, the retailer’s business there doubled, Riewenherm said.

Riewenherm said he believes that the luxury e-commerce market “is so underpenetrated, the growth is there in every region almost. It’s still [in] Europe where we see growth rates, after we localized [the Web site].”

The retailer has also launched a mobile site, and has plans to launch a size-and-fit tool for customers to better choose sizes from different labels and reduce returns.

Overall, Botschen is bullish about mytheresa.com’s potential. “[The business] will grow constantly, as the entry barriers in our industry are extremely high, it’s difficult for someone else to get into our market, with our brand portfolio — [brands] are very sensitive, and with us they know that we’re very reliable, that we won’t do anything that they might not like,” he said. “With everything we’re very sincere, and that’s a key asset, I would say.”