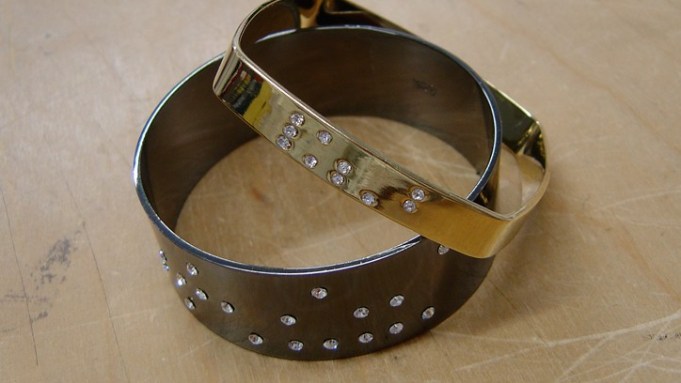 Typically, when an actor or musician gets into the fashion business, it’s when they’ve already achieved critical, or at least financial, acclaim. But Justin Tranter — a lead singer in an underground “garage glam” band — is hoping his jewelry designs will help him garner the fame he has yet to achieve.

The platinum-coiffed Tranter, whose blue eyes are regularly lined in kohl, is the lead singer of Brooklyn’s Semi Precious Weapons. The group has gained some footing in the last few years playing gigs in New York, London, Paris and Montreal, and counts Kate Moss and Moby as fans. But Tranter, who describes the band’s music as AC/DC meets David Bowie, had to finance his musical musings.

So with his mother, a Chicago jewelry designer, as an inspiration and mentor, Tranter took a stab at creating jewelry. He launched Fetty of Brooklyn, a line of 14-karat gold, silver and diamond jewelry that sells for $600 to $800 at Barneys New York Co-op, as well as Precious Weapons, a $15 to $30 costume jewelry collection using motifs like guns and axes inspired by his band that retails at Urban Outfitters, Hot Topic and on the band’s Web site, semipreciousweapons.com.

“Being a singer and songwriter, my goal is to inspire people and make them feel awesome,” said Tranter, who was once the jewelry buyer for Calypso. “[Having a jewelry company] allowed me to reinvent the indie band model.”

Tranter has been eager to make connections, but it’s all with the band in mind. After a chance meeting with a MAC executive, the beauty company signed on to sponsor the band. Through the funding of the jewelry, the band was able to work with producer Tony Visconti, who has worked with the likes of Morrissey and David Bowie.

The brand’s inaugural album, called “We Love You,” will have a wide release on Tuesday and the band has also produced a video for its single, “Magnetic Baby.” In the video, there are piles of people painted in gold. But it couldn’t be just any golden hue.

“Ten-karat gold is my favorite color,” said Tranter. “I just love it. So the makeup team added more silver to it, to make it look like 10 karat.”

This month, Tranter begins filming an episode of “Made” on MTV where he will mentor a young girl on how to pursue her dreams of becoming a rock star.

“It’s charming, funny and whimsical, but it’s definitely edgy,” said Carrie Chapman, senior buyer of Barneys New York women’s Co-op accessories. “Each detail is well thought out and the fact that he’s a rock star is appealing to customers. Everyone loves a story.”

Tranter has also launched another costume jewelry line called Fame. The brass and crystal collection comprises highly polished brass cuffs and medallions, each having crystals that spell out words like “gorgeous” or “forever” in Braille. This line, which bowed in July, will be sold at Nina at Fred Segal, Alter in Brooklyn and Karmaloop.com at $40 to $100.

“My main goal is to change the way pop culture looks,” said Tranter. “I want to accomplish all the things Gwen Stefani and Jennifer Lopez accomplished, but in my own…way.”