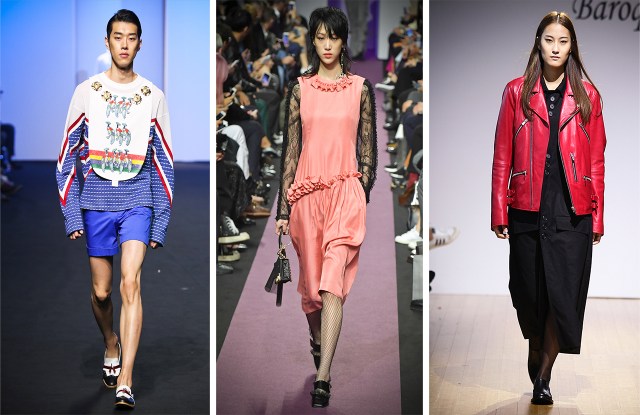 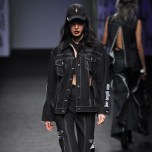 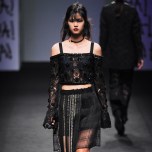 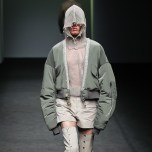 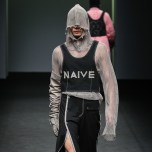 Each day, hundreds of street style enthusiasts filed down the gray concrete ramps at the DDP. It was a bustling scene as young South Korean couples in matching outfits waited by the red carpet. Tourists in brightly colored k-pop-inspired clothing filled the courtyard.

Foreign brands also got in on the action. Vetements staged an “Official Fake” capsule collection sale inside an industrial warehouse in Deokso, a remote area outside of Seoul. The brand, which partnered up with Matches Fashion for the occasion, produced a special one-off collection for the event. It featured hundreds of hoodies, T-shirts, raincoats and caps designed as “counterfeit versions” of official Vetements Ts and hoodies — a nod at the issue of brand authenticity and counterfeit industries in Asia. Organizers said everything was sold out in just 15 minutes. Vetements creative director Demna Gvasalia and his brother Guram were both in attendance.

Yohanix by Yohan Kim, a graduate of London College of Fashion, showed a unisex collection of black lace blouses, black jeans paired with oversize black denim jackets and Ts decorated with crooked smiley faces spray-painted in red. Models in white makeup resembling Heath Ledger’s turn as the Joker in “The Dark Knight” strode down the runway.

Mesh clothing and fishnets were recurring trends throughout the week. Fishnet calf-length socks were seen alongside lace skirts and frilled collars at the show of J Koo, who won the 2015 Woolmark Asia Prize for women’s wear.

Flashes of bare nipples were seen on quite a few runways in Seoul this season. While naked breasts may not shock audiences at fashion shows in Europe or the U.S., South Korea is still a socially conservative country and nudity at fashion shows here is rare.

Various shades of red were popular this season. Baroque showed bright red leather jackets while Kiok showed a sleeveless V-neck dress in the hue. Men’s wear show Munsoo Kwon featured deep red brocade suits as part of its tribute to hippy culture and San Francisco. Some of his Ts and hoodies featured phrases like “Make love not war,” “I left my heart in San Francisco,” and “Peace is cheaper.”

“Just like [the Tony Bennett] song, I left my heart in San Francisco,” said Kwon, backstage after the show. “I feel like the city is my second home…I studied fashion design there and it’s part of my personal memories.”

While these South Korean-themed collections were well received by local audiences, not everyone was convinced that they will translate into sale outside South Korea.

“If you look at [some of] the collections we just saw, [they’re] lovely and [they’ll] probably do really well in [South] Korea, but I don’t see anybody else outside of [South] Korea buying it because it looks [South] Korean,” said Simon Collins, fashion brand consultant and former dean of Parsons.

Collins, who acted as an official mentor for SFW, warned about the problem of local brands relying too much on South Korea’s current “cool factor” without becoming more internationally accessible.

“[South] Korea is hot at the moment. People are paying attention and I don’t know if that translates into sales, but [South Korea] could capitalize on it if they start to behave more internationally. There’s every chance that [South] Korea could become [internationally established] in the way that the Japanese fashion did in the 1980’s,” he said, citing Comme des Garçons as an example.

Some attendees questioned whether South Korea’s cool factor might be starting to wane. In recent months, there have been reports of the Chinese government censoring South Korean entertainment on the country’s airwaves over South Korea’s decision to deploy a missile defense system in cooperation with the United States.

“The [South] Korean fashion industry will inevitably be affected by the ban on [South] Korean content,” said Ivan Chan, ceo of Duier, a Chengdu-based buyer, retailer and styling service provider. “Right now we can do nothing about politics, it’s affecting the [South] Korean market [of course]…The longer the Chinese government’s measures last, the deeper it will impact related industries in both countries’ private sectors.”