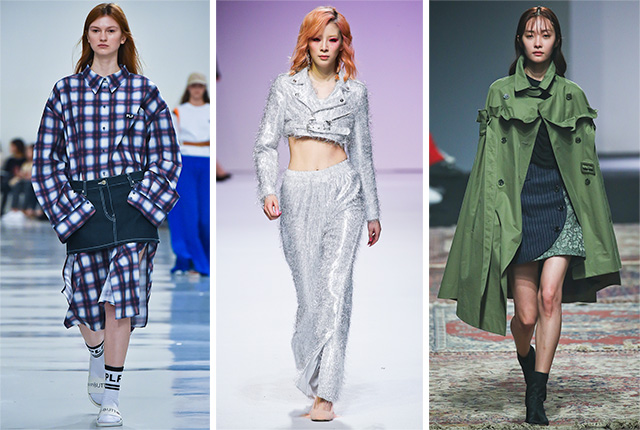 In spite of the mixture of rain, heavy smog and chilly days, the outdoor red carpet overflowed with Kpop stars and celebrities attending the shows, including Tiffany and Seohyun, from Girls’ Generation; Bora from girl group Sistar; Mingyu from Seventeen; veteran model Cha Seung-won, and actress Cha Ye-ryun.

Rosie Huntington-Whiteley reportedly made an appearance at the star-studded Metrocity show, which featured a series of Eighties-influenced “femme-fatale” looks, including fishnets, black leather jackets and velvet dresses with oversize sleeves.

At Pushbutton’s collaboration with Line Friends — a series of cartoon characters created by Naver-owned messaging company Line Corp. — sporty, preppy looks with cartoon-patterned suits and bomber jackets were featured on the runways.

Songzio by Song Zio, returned with his bold menswear looks, featuring paint-splatter patterned trousers as well as well-tailored black suits cut in the style of a Spanish bullfighter’s costume.

Another fun, albeit possibly controversial show, was Munsoo Kwon’s Amish-inspired collection. The men’s wear designer showcased a series of farmhand-meets-street-style looks, with traditional checkered patterns, broadfall pants, suspenders and capes paired with velvet track suits, and other ath-leisure items. Kwon’s collection was inspired by “rumspringa,” a rite of passage for Amish youth, represented by a pair of shining prayer hands embroidered onto Kwon’s collection of sweatshirts and oversize coats.

While many of the shows were energetic and youthful, some were notably more somber, like JKoo’s contemplative collection of refined capes, trench coats, bomber jackets and belted jackets. “Feminism, Dadaism, street style, feminine, curves and A-lines were all part of our collection,” said Choi Jin-woo, who designs JKoo alongside his wife, Koo Yeon-joo.

Choi explained that he did not invite a single celebrity to the JKoo show, an act that is unheard of in Korea and much of Asia’s celebrity-focused fashion industry.

“Fashion is always connected with entertainment, but sometimes it’s not real. The garment is real…in Korea, when we prepare a collection, the press and magazines only call to ask me who is going to be in my show.…No one really talks about the collection or the inspiration behind it, they are always interested in who was in your show,” said Choi. “Kpop [and celebrities can] help designers…but the effect doesn’t last a long time.”

The limitations of celebrity marketing are especially evident now that most South Korean celebrities have been unofficially banned from appearing in China. Over the past few months, China has reportedly begun to impose a series of embargoes on Korean cultural imports, products and outbound travel to the country due to its disapproval of South Korea’s decision to employ the Terminal High Altitude Area Defence (THAAD) anti-ballistic missile system.

This year, there were noticeably fewer Chinese attendees at the event.

“Before the collection, I really worried,” said Choi Jin-woo. “If Chinese buyers won’t come to the fashion show, if they aren’t buying our garments. I’m going to be struggling because I need to have a stable business.”

Choi added that Korean fashion designers will need to focus on diversifying their market. “I had a friend in Paris who said, ‘You have to be an international designer. You cannot focus only on the China market because it’s not stable. It can change anytime it wants,’” he said.

Jessie Xie, a Beijing-based buyer, said while she has noticed the impact of THAAD in Korea and China, her business has continued as usual.

“I hope we will not be affected, but we don’t know,” said Xie. “It’s not anything we can control, and we don’t know how the policy will go on from here.”

Seoul Fashion Week’s organizers said the event went better than expected. “I was worried in the beginning, but every buyer who came last season came again this time, and some new buyers are also coming,” said Kuho Jung, executive director or Seoul Fashion Week. “We do have a 20 percent increase in the number of Asian buyers so it’s better than what we expected.”