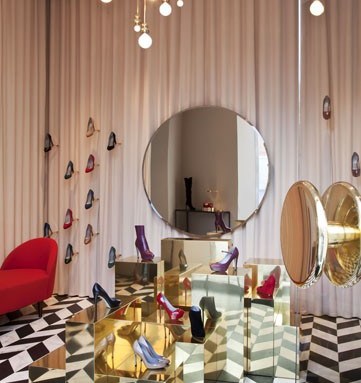 MILAN — Sergio Rossi is unveiling a new store concept with the official reopening of its Rome flagship today.

“We plan to refurbish half of our stores over the next three years,” said Sergio Rossi president Christophe Mélard. “We started with Rome because we want to communicate that Sergio Rossi is an Italian brand and convey the value of this. A store is a powerful tool.”

The label’s creative director, Francesco Russo, and the London-based interior design studio Studioilse conceived the boutique’s new blueprint. “This is the first time we have worked with Studioilse and we are very proud of this collaboration,” said Mélard. Principal Ilse Crawford “has a worldwide reputation and she was immediately able to understand our DNA.”

The store, which first opened in 1996 and is located across from Rome’s iconic Spanish Steps, covers 810 square feet.

Russo pays tribute to legendary divas such as Sophia Loren, Anita Ekberg and Monica Vitti, while opting for “domestic comfort” at the same time. Russo, whose first collection for the brand bowed for fall 2009, said he was looking for a “welcoming space where customers feel at ease, with curved shapes, such as an elliptical sofa, and round tables contrasting with more squared-off central elements.”

Sergio Rossi is about “feminine, seductive design,” he said, adding that he wanted to “play with conformism and transgression — think Luis Buñuel and his take on the bourgeoisie.”

The store, with an 18th century stucco facade and four front windows, is divided into two distinct parts. The first is very visible from the street, while the latter is more hidden and reminiscent of a boudoir, said Russo.

Crawford said she wanted the store to represent the brand and to be “the expression of the essence of Sergio Rossi and its fascination for the femme fatale, with a slightly voyeuristic glamour.”

The front section revolves around a large circular mirror, polished brass multilevel display cubes, a black and white herringbone-pattern Italian marble floor and a lipstick-colored velvet chaise lounge. Conversely, the back is darker and more intimate, with blue floor-to-ceiling curtains and a blue velvet sofa on plush blue carpet layered with a zebra skin.

There are currently 80 Sergio Rossi stores globally. Asia, China in particular, and the U.S. are priority markets for the brand, said Mélard. Stores in Harbin and Chongqing, China, will open in early 2011. “We are consolidating Europe and Japan and reinforcing the U.S., which is key for us and where there is room for a big improvement,” said Mélard.

While focusing on the brand’s core footwear business, Russo said he is also keen to further develop the handbag division. In particular, he noted the success of the Viva bag, launched two seasons ago. “It’s very ladylike, but soft and deconstructed — it can fold like an origami,” he said.