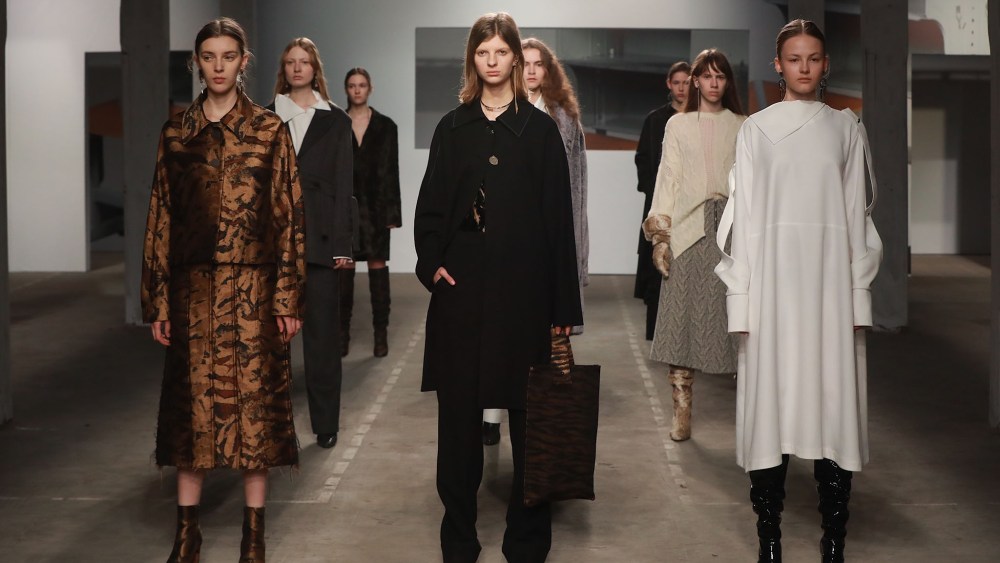 SHANGHAI — With 85 shows and presentations over eight days — and a total of almost 1,000 brands participating in showrooms and trade shows around the city — Shanghai Fashion Week has grown to be the epicenter of China’s fashion business.

The continuing evolution of the country’s retail scene to accommodate an explosion of buyer’s shops and multibrand stores is proving a major boost to the business element of the week.

“Now there is some interest and attention from buyers to us here in Shanghai. For the Chinese market, there is a big opportunity, at the showrooms here we see a lot of Chinese buyers coming up,” said Lv Xiaolei, known universally as “Madame Lv,” vice secretary-general of Shanghai Fashion Week.

Fan Yang, the founder of YCO Foundation, a Chinese platform that offers both online and offline showrooms, agrees that industry growth is making this an exciting time for fashion in Shanghai and China, though she cautions that education and consolidation are still important factors to consider in this still-emerging market.

“It’s an exciting time and there are more and more stores opening, but it’s still a new industry. A lot of buyers here aren’t as advanced as in Tokyo or New York, so we can make suggestions to them about brands that might fit with their stores. The buyers need to be educated and guided a little bit.”

As Shanghai Fashion Week develops to become a key industry event in Asia, it’s drawing the attention of international influencers — Vogue’s Lynn Yaeger and Vestoj’s Anja Aronowsky Cronberg were both in attendance — and buyers from overseas keen to discover new Chinese talent.

For first-time visitor Jack Cassidy, men’s wear designer and contemporary buyer for Selfridges in London, Shanghai proved an exciting discovery, with a different and, in some ways more original, energy than fashion weeks in other Asian capitals like Tokyo and Seoul.

“I’ve been really impressed, when I compare it to other fashion weeks, it’s definitely the strongest I have been to in Asia,” Cassidy said.

“I’ve been so impressed by how diverse it is, you have the Labelhood platform with its emerging talent, which is already as strong as any emerging talent platform from across the world. It’s as good as New Gen in London or Made in New York,” he added.

Likewise, London-based Machine-A business manager and buyer Mia Poirier pointed to Shanghai’s DNA as a fashion city as feeding fashion week and the local industry as a whole in a positive way.

“People here are very into clothing and into shopping. There does seem to be a distinct style [in Shanghai] that’s very different to Paris, London and Tokyo. I can only imagine that with more designers and more attention on Shanghai as a fashion city that will only incubate and evolve,” she said.

Cassidy and Poirier were both impressed by the local debut of Shanghai-based brand Sirloin, founded by the Japanese-Swedish duo Mao Usami and Alve Lagercrantz — respectively alumni of Louis Vuitton and Dries Van Noten — who are best-known for first showing the collection in the Madeleine public toilets in Paris.

The brand’s play on reimagined garments and their sense of humor both won fans. One cropped T-shirt with a rolled-up hem, for example, references the tendency for middle-aged men in Shanghai to roll up their T-shirts to display an expanse of flesh and help cool off during the city’s sweltering summer months.

Staff Only’s presentation had a “fashion victim” theme and was laid out as a crime scene. Xu Zhi’s intensely elegant presentation referenced Icelandic performance artist Ragnar Kjartansson’s “The Visitors” in having rooms divided by fringed screens and featuring a different version of the Xi Zhi woman — from off-duty to occasionwear — with each incorporating the brand’s signature technical and textural textile development.

“I really liked Yingpei Studio’s presentation, it was very considered. This season [designer Ying Pei] graduated to a mature level. The show was incredible, I liked the feminine use of suiting fabrics and I thought the cuts were interesting,” Williams said. “I loved Hiuman. It was such an interesting, dynamic presentation and genuinely one of those ‘what the’ moments, and for me, something quite unique. I think the step up from last season to this season was quite strong. The collection was quite small which was interesting because she wasn’t afraid to have a small, well-curated collection of looks.”

Lane Crawford women’s wear buyer Jillian Xin was also impressed by Minki’s “great silhouettes and use of color” and what she described as ShuShu/Tong’s strongest collection to date.

Xin has seen the development of many of the young designers showing at Shanghai Fashion Week and sees both the design quality and business side of the event getting stronger.

“I think design in China is becoming more and more interesting. Previously many of the reference points were similar, which led to quite homogeneous collections. Now designers are bolder, more confident of their points of view and as a result there’s much more personality. It’s a very exciting time for Chinese design,” she said.

“Domestically, customers are extremely supportive of local designers and increasingly willing to buy. Internationally, more and more major retailers are coming to SFW and placing orders. But fundamentally what’s driving the demand is the fact that the quality of the collections is getting better every season and if the product is good, there will always be a customer.”

Aside from shows in the tents in shopping and entertainment hub Xintiandi, and the Labelhood platform for emerging independent designers in an abandoned warehouse by Shanghai’s gritty Suzhou Creek neighborhood, other events on the schedule included the second edition of Green Code, in conjunction with Lane Crawford, which highlights sustainable fashion brands and hosted a conference on “The Future of Fashion.” There also was a tie-up between Chinese designers CJ Yao, W by Wenjun and Pronounce with Gap — which is trying to prove its chops here with fashion forward collaborations.

The CJ Yao and W by Wenjun presentations, which included the capsule collections for Gap, were characteristically bold, colorful and commercial.

Less commercial was the graduate show of Donghua University, which is home to one of China’s top fashion schools and featured the work of nine graduates, some working in particularly non-traditional materials, including tinsel and drinking straws.

As well as offering the B2B component, Shanghai Fashion Week this season continued its efforts to become more consumer facing. In addition to selling tickets to consumer shows at Labelhood – which were generally re-runs held directly after industry events — the organizing committee introduced Shanghai Fashion Weekend, a consumer event held the weekend after fashion week wraps up with exhibitions, talks and live music. The event was expected to draw 30,000 people over its three-day run.

Also held in conjunction with Shanghai Fashion Week was the Shanghai International Fashion Showcase, which this year reflected the growing openness of Chinese consumers to niche labels from both home and abroad by inviting smaller international brands — Damir Doma and Les Hommes — to present shows at the Shanghai Exhibition Center in the major retail and commercial thoroughfare of West Nanjing Road.

Les Hommes, which opened its first store in China last month in Beijing’s Sanlitun district and plans to open a total of 15 stores on the Mainland over the next five years, used the event to introduce the brand to Chinese audiences.

“This is a good opportunity for us to say, ‘We are here.’ This is the introduction of Les Hommes in a more official way. Not everybody comes to Milan, so it’s good for us to come to this part of the world to showcase and tell the people what we do,” explained creative director Bart Vandebosch, who added that he believes China is ready for Les Hommes’ elevated streetwear aesthetic.

Not everyone was so effusive in their praise of Shanghai Fashion Week, with Istituto Marangoni group managing director Roberto Riccio — whose school held both a graduate show for local students and sponsored a show from Marangoni alum Maurizio Pecoraro as part of the schedule — still holding out hope that Shanghai can take a step forward into the upper echelon of world fashion weeks.

“You need to fight against all the other fashion weeks in the world, it’s like a war,” he said. “I had much bigger expectations. I don’t think Shanghai Fashion Week has become, yet, what it should be. I would like to see here more like London where everybody is there and there is an expectation that there is an Alexander McQueen and Alexander Wang inside one of your students.”

“Actually, the timing is quite late, it would be ideal if we could move to the middle of March, but it’s difficult for us because of Chinese New Year. However, we will really try to move earlier because for now it’s very rushed for orders. From next year, we will consider this,” she said.