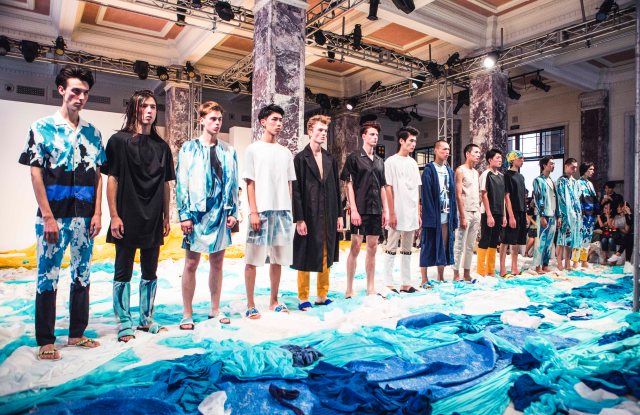 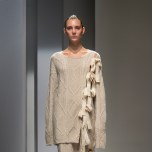 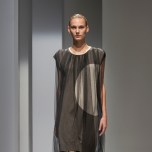 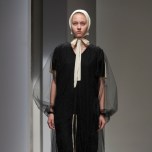 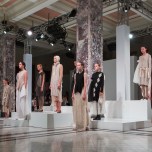 SHANGHAI — As well as continuing to shape its identity as a forum for the best of China’s up-and-coming design talent, Shanghai Fashion Week branched out this season to bring fashion consumers into the tents.

As with most fashion weeks, Shanghai Fashion Week, which started 13 years ago and wrapped its most recent spring edition on Wednesday, has traditionally been a business platform for the fashion industry — and an increasingly effective one in recent years with the growth of the multibrand retail sector and fashion buying culture in China.

The biggest consumer-facing event of the week, which actually ran eight days, from Oct. 12 to 20, was Fashion Rocks China. It was the first time the event — a mash-up of music and fashion coming together to entertain an audience of thousands in the stadium and orders of magnitude more via a live-stream of the event — has been held in China.

Representing Chinese design at the event was Xiamen-based brand Sankuanz, which combines traditional Chinese textile traditions with modern, utilitarian aesthetic. His collection was shown alongside a performance from British singer Charli XCX.

“No one has ever done an event like Fashion Rocks in Asia, especially not on this scale. Our goal is to bring and produce content that the Chinese audiences have not experienced before,” said Gary Mak, general manager of event organizer Apax Live.

“Today a majority of content is being consumed digitally online, mostly via smartphones, so it is important to bring something unique and different for consumers that they can experience in person. [Having said this] Fashion Rocks China [was also] live broadcast via Tencent and reached an audience of millions.”

Labelhood, a platform at Shanghai Fashion Week for presenting up-and-coming Chinese brands’ collections in a flexible and creative format — for those who might balk at the expense of showing in the traditional way in the tents in Shanghai’s upmarket fashion retail destination of Xintiandi — also introduced a consumer-facing element to some of its shows.

Some brands showed their spring 2017 collections multiple times, with the first show being for media, buyers and fashion industry insiders and a replay of the presentation held right afterward for consumers, who were able to buy tickets to the shows online.

“We need to do this. Fashion needs to pay attention to consumers; we are going to keep on making the industry-focused events more professional but also welcome consumers to participate more in other parts in the future,” said Lu Xiaolei, the vice secretary general of Shanghai Fashion Week.

Simon Lock, the cofounder and chief executive officer of online showroom Ordre.com, was visiting Shanghai Fashion Week for the first time in many years in order to expand his platform’s presence in China. The site already features names such as Helen Lee and Nicole Zhang, as well as 65 multibrand retailers from mainland China.

“We are seeing a very, very fast transition now from fashion weeks showing wholesale collections and being purely trade events to being about consumers being able to buy clothes and in other ways get involved,” Lock said.

“The showrooms and the trade shows can be doing the business of fashion, the shows in the tents and at Labelhood can be helping connect to consumers, so you can be multifaceted, which is brilliant,” he added.

Speaking of the growth of Labelhood, which was only introduced at Shanghai Fashion Week last April, Lorenzo Hadar of Los Angeles retailer H. Lorenzo couldn’t believe the development of the event in such a short period of time.

“I’ve seen it grow from this little thing into this…it’s like a monster,” he said.

In past years, Shanghai Fashion Week has balanced the interests of local brands as well as international labels that used the shows as a way to reach the massive Chinese market. Now the focus is much more on local brands, with Fashion Rocks China being the only clearly international brand event under the Shanghai Fashion Week umbrella this season.

Granted, Gigi Hadid was in town during fashion week to meet fans and promote her Tommy Hilfiger x Gigi Hadid collaboration at an event on Shanghai’s famous Bund promenade, but the meet-and-greet wasn’t part of the official fashion week schedule.

What the week showed was that Shanghai is more confident than ever in its position as China’s fashion capital and in its role primarily as a conduit for the promotion of the best of the country’s independent design scene.

For Gemma Williams, author of “Fashion China,” spring 2017 was her fifth season of Shanghai Fashion Week, an event she has seen quickly develop over the past three years as a leading fashion week in the Asian region.

“I think there is a very direct correlation between London Fashion Week and Shanghai in that they are key destinations for talent scouting and discovering new talent,” the London-based Williams said.

“I feel that already Shanghai is carving a unique niche as a truly dynamic platform for creativity and will soon be a key destination on the global fashion scene. It has transformed itself, even in the three years I have been attending and it’s really inspiring to see how it’s fostering a fashion ecosystem within China,” she said.

Lock, who was instrumental in starting Mercedes-Benz Fashion Week in Sydney in 1996 and has worked with fashion weeks around the Asia-Pacific region and the world, also sees Shanghai Fashion Week emerging as an important player in the region.

“The reputation that Shanghai Fashion Week has developed is clearly for the new, emerging stars and I think the interest in the fashion world globally is to look at this marketplace and see where this new talent is coming from. That’s helping to position the event as having a point of difference,” he said.

“Hong Kong as a fashion week has been singularly unsuccessful because they don’t have many designers there and the event itself is more like a trade show, it’s really a sourcing event,” he added. “Tokyo has made its reputation on three designers and has hung its hat on that for 25 years and really needs to bring some new people to the table.”

According to organizers, the growth of Shanghai Fashion Week has attracted the attention of local government bigwigs, leading some to harbor grand ambitions for Shanghai as a fashion capital of China, Asia and the world.

“These days our leaders can see the impact Shanghai Fashion Week is having on the city. These leaders sometimes ask whether we have the ability to grow big, like Paris or something, but we tell them we are just doing this to be useful, and if people find it useful that’s the best thing we can do to grow the industry and impact the city,” Lu said.

At the same time as promoting the best in local independent design, organizers say Shanghai Fashion Week will continue its work to encourage the fashion industry with business-focused events, including showrooms and trade shows such as Mode Shanghai, On Time Show, The Hub (which focuses on bringing smaller overseas brands to the Chinese market) and Green Code (a combined B2B showroom and B2C pop-up shop held in conjunction with Lane Crawford and focused on sustainable and eco-friendly brands).

This edition of the Mode Shanghai Fair saw around 8,000 visitors over its three-day run, from Oct. 13 to 15. Most promising, though, was not the gross numbers through the doors at Mode but the percentage of them that hold the keys to distribution for independent and niche brands from China and abroad exhibiting at the fair. Buyers and agents accounted for 47.9 percent of the total visitors.

Also important is that this burgeoning number of buyers, particularly those from China’s growing multi-brand retail market, are becoming more open-minded about buying brands from their home market, as well as international names.

Jennifer Zheng, ceo and merchandising director for The Room, a chain of multi-brand stores focusing on young designer brands located in Shanghai, Nanjing, Beijing and Ningbo.

After traveling to the world fashion capitals over the course of fashion month, she now also makes the trade shows and showrooms of Shanghai Fashion Week a priority.

“I go to New York, London, Milan and Paris fashion weeks and then come here to Shanghai. Shanghai Fashion Week is really booming. Three years ago there weren’t too many brands that we could see, but now you can see very interesting and creative brands,” she said, adding that she has benefited in multiple ways since broadening her brand base to include Chinese labels.

“In China they always think about the customer, this is why they are fast to action and it’s good for us. The first time we order, we will only order a small quantity, but if it works for our customer and we want to make a larger order they can turn this around very fast. It’s not the traditional way of working, like in Europe.”

Favorite shows from buyers and international guests, such as Lock and Williams, included Xu Zhi, Wan Hung and the capsule collaboration between cashmere company 1436 and Uma Wang.

“Spring 2017 has been one the strongest seasons we’ve seen in Shanghai,” said Lane Crawford buyer Jillian Xin. “Some highlights included the ethereal romance of Xu Zhi’s presentation — his nude pink is officially my favorite color of spring 2017. I also always look forward to the theater and energy of Angel Chen’s shows.”