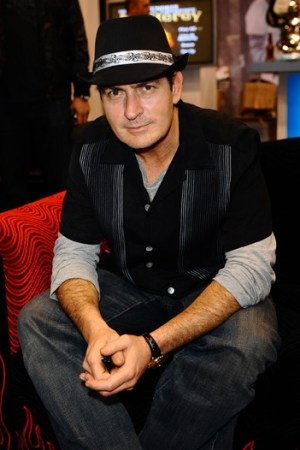 LAS VEGAS — What do actor Charlie Sheen and country artist Toby Keith have in common? Probably not much, but they both showed up here last week to introduce men’s apparel lines.

This story first appeared in the February 26, 2009 issue of WWD. Subscribe Today.

Sheen made an appearance at the MAGIC show for Christopher Wicks of Rock & Roll Religion, who jumped on the popularity of the CBS comedy “Two and a Half Men” to create the Charlie Sheen line of retro shirts. The actor, whose show has topped ratings for the past six years, posed with fans for photos to promote the DaVinci Collection by Charlie Sheen.

He said his costume designer, Mary Quigley, was the one who created the retro look for jingle writer Charlie Harper, the character Sheen plays on the show. “He’s self-employed, lives at the beach and is not uptight or constrained,” Sheen said. It wasn’t long until the shirts “became their own character and took on a life of their own.”

After talking with Wicks for several years, they decided to take the plunge. “It’s kind of cool. I just spotted a few of the new ones with my name in the collar, and I had a private, proud moment,” he said with a smile.

Sheen admitted his own style is different from the hard-drinking, womanizing Harper. Off the air, Sheen prefers jeans, long-sleeve cotton Ts, “two or three jackets that I rotate depending upon the weather, and Hanes underwear — I’m a spokesman for them.

“And I wear a hat most of the time. Not because I’m losing my hair, but because it’s a pain in the ass to get my hair right.”

The Charlie Sheen collection will retail for $59 to $79 and will be targeted to major department stores.

Last Wednesday, country singer-songwriter Toby Keith hosted a fashion show at his restaurant, I Love This Bar & Grill, at Harrah’s on the Strip, to introduce TK Steelman, a new line of men’s moderately priced apparel.

The long-sleeve shirts, Ts, polos, sweatshirts, jeans, cowboy hats, baseball caps, bandanas, belts, leather wrist straps and more are being developed with Royal Merchandising Group. Each item has been approved and inspired by the singer. That’s why there are also sleeveless shirts in the line, along with a preponderance of jeans.

Keith said at the event: “I have to be comfortable in my jeans. They have to fit just right, not too baggy. So I worked the designers hard on that and I think they did a great job on the jeans. I love them.”

TK Steelman is expected to hit retailers including Kohl’s, Target, Wal-Mart and Macy’s in June. The line is expected to expand into women’s wear after its initial launch.