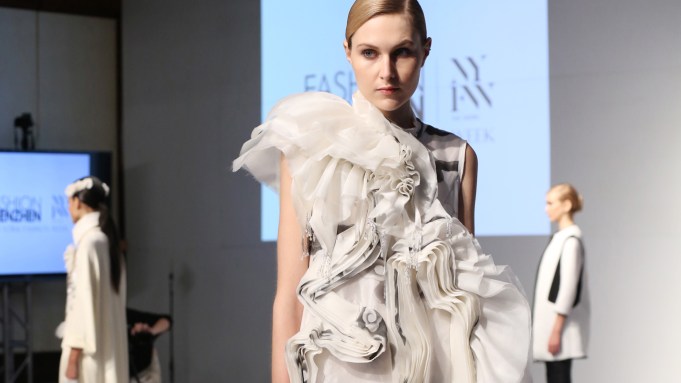 Fashion designers from the Chinese city of Shenzhen were back for New York Fashion Week.

Showing for the third time since 2013, the IMG collaboration with the Shenzhen Garment Industry Association is aimed at helping the Chinese brands grow their businesses domestically and internationally. Its purpose is also to allow the designers to learn from their American counterparts at different venues while they are here in New York for the week. Called Fashion Shenzhen, the program is set up as two distinct parts. Part one is a runway show featuring capsule collections from three of those participants. Part two includes a venue that showcases the work of over a dozen brands.

This year, the government chose to feature Deng Hao, Kavon and Haiping Xie in the runway show on Sept. 13.

Hao of Shenzhen Denghao Fashion Co. Ltd., who showed in 2013 for spring 2014, is considered the “Chinese knitting queen.” Known for high-quality knitting and print design textiles since 1993, her first collection at NYFW two years ago showed primarily intricate, super-fine knitwear options. In the latest show, her repertoire has evolved to include more mixed-media fabrications, such as panels of knitwear patterns combined with silk, linen or lightweight cotton panels. Many of the knitwear pieces in the capsule collection were form-fitting, while the mixed media options were of a looser fit. The highlight of the capsule collection remains her dresses that show different knitting techniques. She said her “inspiration comes from the yarn threads, which I experiment with every season,” adding that combining Eastern and Western architecture is also a consistent theme each season. That latter is reflected in knitted tops, with long organza skirts.

Known for its color, Kavon combines brights with 3-D cutting to outline apparel offerings. The brand showed at Fashion Shenzhen for the first time. Kavon’s Mary Ho said her inspiration came from the 24 points in the lunar calendar, called jieqi, which represent seasonal changes every 15 days based on the position of the sun. For the show, “I showed just four jieqi from the entire 24 because of time limitations [of the show],” Ho said. Her aesthetic tends toward the looser fit, and the capsule looks favored long, tunic tops over pants and A-shaped silhouettes.

Xie first showed for spring 2015. He’s known for creations featuring visual effects inspired by elements of traditional Chinese history and culture. That sometimes is translated into looks reminiscent of costumes from a Chinese opera. Xie said this year his line was inspired by “wall paintings in China.” While a few of Xie’s looks this season featured frilly visual effects, most were toned-down, allowing the silhouette and silk mural design on the fabric to take center stage. That made the collection much more commercial — and wearable — for Western consumers.

The second component was a reception at the Crowne Plaza hotel that incorporated a presentation of more than a dozen Shenzhen fashion brands. Some of those brands include Grace Deng, I Love Pretty, Odbo, Vmajor, Isoke Liu and Guyan, to name a few.

At the reception, Shen Yongfang, president of the Shenzhen Garment Industry Association, emphasized the creativity and innovation that is available at the Chinese city, noting that the communication between designers from Shenzhen and New York will help bring China and the U.S. “closer together.”

Shen has said the Shenzhen is sometimes referred to as the fashion capital of China, since it is an apparel-manufacturing hub. The city is home to more than 3,000 apparel firms, 800-plus brands and more than 350,000 workers.

Designer Zang Toi, who was present at the reception, said about NYFW this year: “Change is always good. Hopefully, IMG will find a permanent home. The different venues can be exciting, but centralizing all the lines at one central location will make it easier for all the attendees.”

Bringing Fashion Shenzhen to NYFW was a collaboration between the Shenzhen Garment Industry Association; IMG; Shenzhen Municipal Government; and the Consul General of the People’s Republic of China in New York, among others.

Shenzhen Fashion Week, which had its debut in March of this year, will again be held in March 2016.