The Taiwanese brand has opened a flagship in Ginza and plans to open about 20 stores in Japan by 2020. 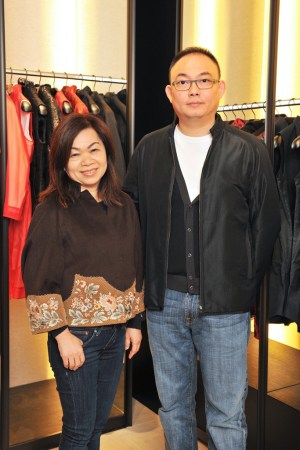 TOKYO — Shiatzy Chen, a luxury fashion brand from Taiwan with a 35-year history, is stepping up its international expansion with a new Tokyo boutique and plans for more stores in Japan.

The 1,453-square-foot shop, which opened Tuesday and marks the brand’s debut in the Japanese market, is located inside The Peninsula hotel near Ginza. The hotel is also home to a Graff jewelry boutique.

Harry Wang, president and chief executive of Shiatzy International, was in Tokyo for the opening along with his mother Tsai-Hsia Wang-Chen, the brand’s founder and design director, who largely goes by the name Shiatzy Chen. The executive said that the store at the Peninsula is just the first step in the brand’s expansion plans for Japan.

“Japan is the number one luxury market, so we have been looking into this market for quite some time,” Wang said. “And we feel that if we want to grow as an international brand, Japan has to be one of the markets that we have to dominate.”

Wang said that by 2020, he hopes to open about 20 stores in Japan, including three to four freestanding stores and 15 or 16 shop-in-shops at department stores. Aside from having about 40 stores in the brand’s native Taiwan, it currently also has doors in Hong Kong, Macau, China, Paris and Kuala Lumpur. The Tokyo store marks its first foray into the Japanese market, where until now it didn’t even have wholesale distribution.

Shiatzy Chen’s worldwide sales currently total about $70 million, and Wang said he hopes this figure will triple by 2020 as the brand continues its international expansion push. The company is aiming for sales of 300 million yen, or $2.92 million, in Japan in 2014. Wang said this would include both the store at the Peninsula, as well as hopefully a department store corner that would open in Tokyo by the end of next year. Other markets the brand is hoping to enter as early as next year include Singapore and the  United States.

In Japan, Wang said he expects Shiatzy Chen’s core customers to be women aged 45 and over, although the brand does have a small menswear offering as well. Wang-Chen said that Japanese women dress similarly to women in Taiwan, so she thinks the brand will suit Japanese consumers.

Shiatzy Chen’s pieces are made with luxurious fabrics, and often include oriental accents or details like hand embroidery or beading. A jacquard dress sells for 123,800 yen, or about $1,204, in Japan, while an all-over beaded clutch goes for 272,800 yen, or $2,653. The store also carries a small selection of home and gift items like trays.

The store opening comes at a delicate time in Japanese-Chinese relations. Japan and China have recently been engaged in a territorial dispute over a small chain of islands in the East China Sea. While Taiwan also has a claim on the islands, the dispute between Tokyo and Beijing has intensified to the point where Japanese retailers in Mainland China have in some cases experienced temporary store closures or drops in sales. When asked if he was worried whether political tensions could impact his brand’s business in Japan, Wang said much hinges on whether Japanese consumers fully understand Shiatzy Chen’s origins.

“We are from Taiwan, so if the Japanese take us as a Taiwanese brand, there shouldn’t be any problem,” Wang said. “But if they think we’re from China, there might be…a drop in sales at the time there’s a conflict between China and Japan.” However, his mother Wang-Chen also noted that ultimately “there’s no boundaries in fashion; no matter where we are from, the design and products would be perceived as beautiful objects. It’s nothing to do with politics and countries.”

“[It’s] well made and cut nicely for a slimmer hipped, reduced bust figure that suits many women in the region… Wang Chen over there is very canny — she’s always seen herself as the Asian region’s Chanel — understated, known by the discerning… [those] who want the clothes that say ‘Chinese’ etc. without the quality issues or bling,” he said.