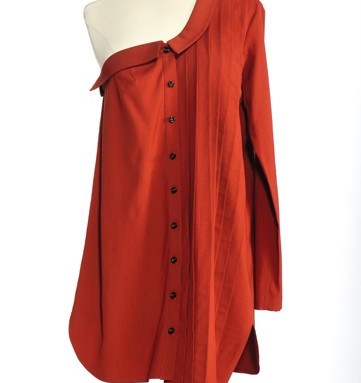 When Ally Hilfiger returned from a trip to Paris last summer with a new silk shirtdress — black, sandwashed, slightly oversize — she brought back more than just the pretty spoils of overseas shopping. The garment proved to be the inaugural spark behind her new label NAHM, co-designed by Nary Manivong. Later that year, advised by her father to launch with a single idea — à la Diane von Furstenberg and her wrap dress or Ralph Lauren and his ties — the two friends, rifling through her closet, zeroed in on that Paris purchase. “I loved wearing it,” says Hilfiger. “I wore it during the day, during the night, casual, whatever. If I gained weight, I could wear it. If I lost weight, I could wear it. I felt confident in it even though I’m only five feet tall. It’s my favorite item.” She and Manivong ultimately hinged their entire line, which bows this fall, on the concept of the shirtdress.

They couldn’t have done it at a more opportune time. Variations on that button-down frock, beloved of Fifties housewives and boyish types alike, was all over the recent runways — from Prada, Altuzarra, Jason Wu, Michael Kors, Limi Feu, Bottega Veneta, Roland Mouret and Mr. Hilfiger himself.

And, yes, we’re talking about the fall runways. Chalk it up to the rising mercury or the ever-popular layering motif, but the simple shirtdress has gone beyond its usual summer/resort terrain. “It’s really a year-round item, depending on how you style and accessorize it,” says Colleen Sherin, senior fashion director at Saks Fifth Avenue, who ordered versions by Chloé and Rag & Bone for the store. “In the summer, it can be worn unbuttoned with the sleeves rolled up, with a bare leg and flat sandals. It can be worn in the winter, belted, with tights and boots. It’s a seasonless, highly versatile item.”

Just look back to the history of the shirtdress for proof: It’s been reworked from the utilitarian Forties to the fit-and-flare Fifties to the loose Sixties to the Mary Tyler Moore Seventies and beyond. Even Joan Crawford made the most out of a gingham shirtdress while playing a hard-partying strumpet in the 1932 flick “Rain.” (Bensoni’s Sonia Yoon has her own gingham shirtdress memory, though in green — as part of her uniform at London’s Hazelhurst School for Girls.)

“It’s a no-brainer,” says the Milan-based designer Sara Roka of the garment’s wide appeal. “You don’t have to think hard about it.” Last year, the Valentino and Ruffo alum launched her own line revolving around the simple button-down. She’s since whipped up everything from wrap dresses and ruffled frocks with that single starting point. Roka’s entrée into the field came courtesy of her brother Steven, a swimmer with very long arms. “Nothing would fit him off the rack, so I started having custom shirts made for him here,” she says. “Then I asked if they could make shirts for a woman and started giving them designs. There are so many things you can do with a shirtdress — it’s like a canvas.”

While reinterpreting the classic style isn’t uncharted territory — Yohji Yamamoto and the Viktor & Rolf team have long paved that road — more and more designers are getting creative with the wardrobe staple. This fall, for instance, Gryphon’s Aimee Cho retailored vintage men’s shirting and added fragments of lace petticoats to their hemlines. “I think it’s a fun twist to take something that’s a bit more masculine and make it feminine and romantic,” says Cho, noting that this is the first time she’s offered shirtdresses since launching in 2007. The same goes for Kaelen Farncombe, who launched her collection last year and for fall added her own shirtdress — a hybrid of fluid pleats and Western wear (see cover). “The shirtdress is the epitome of effortless style,” she says. “It can be anything you want it to be — masculine or feminine, classic or a bit more experimental.” Farncombe adds that the item has its own brand of sex appeal that bodycon styles can’t touch: “It’s the morning-after thing,” she remarks. “You’re putting on your man’s shirt.”

The new updates for fall are as simple as novelty fabrications — Lyn Devon used suede and cashmere — or as deconstructed as NAHM’s myriad takes on the garment, i.e. the one-shoulder tunic or the bustier version, fitted sheathlike with a single bib detail illustrating its men’s wear origins. “You can incorporate the elements of a shirt in a lot of different ways,” says Manivong. “Maybe we’ll have a really sexy dress but with a placket as the closure in the back.”

According to Ken Downing, senior vice president and fashion director at Neiman Marcus, the current shirtdress craze began two seasons ago with the rise of sportswear on the runways. “We had been in such a dress cycle for so long,” he explains. “Then designers were going back to the idea of trousers, pantsuits and mixed separations, and people started referencing Claire McCardell. When they did a dress, they were looking at the idea of a shirtdress — it’s a popular silhouette when you’re looking at bringing sportswear pieces back to the runway.” He notes that, now, the look crosses over with two of fashion’s big trends: sleeves and Seventies Yves Saint Laurent. Among his favorites for fall are shirtwaist dresses from Valentino and Gucci.

“Fashion always has a nod to the past as it redefines the future,” Downing adds. “We all love to find that perfect piece that was once an iconic classic and reinvent it. And with the shirtdress, you can be as alluring or as demure as you choose to be — by how much you button or unbutton it.”