An unorthodox fashion show is being staged on the streets of the Garment District. 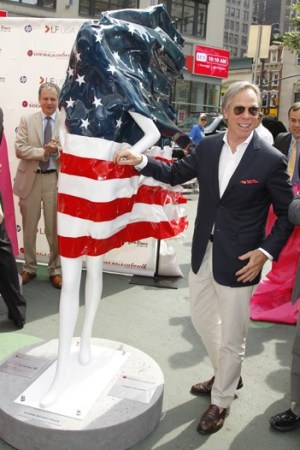 NEW YORK — An unorthodox fashion show is being staged on the streets of the Garment District.

It’s called Sidewalk Catwalk, and scores of designers, garment executives and business leaders strolled up Broadway Thursday morning to unveil the artistic, sometimes off-the-wall collection of 33 mannequins, each dressed by a designer. “This is all about bringing what’s inside the walls of the garment industry outside to the streets of New York,” said Terry Lundgren, chairman and chief executive officer of Macy’s Inc., which, along with LF USA, The New York Times and HP, sponsored the project in conjunction with the Fashion Center Business Improvement District and several designers.

The objective is to project the Garment District as a center of creativity, not just commercialism, even amid its shrinking manufacturing base, and to enliven the stretch between Herald Square and Times Square, which has been partially transformed into a pedestrian plaza with outdoor seating and restricted vehicle traffic. Catwalk Sidewalk will grace Broadway from 35th to 42nd Streets through Sept. 3.

“Sometimes this industry needs a good kick in the butt to get it going in the right direction,” said Elie Tahari, whose mannequin is futuristically dressed in aluminum and Plexiglas panels and pays homage to “Orpheus and Apollo,” a sculpture by Richard Lippold in Lincoln Center, where designers will show their spring collections in September. “The garment industry needs to reinvent itself, but there is more than hope for this. We have to be as creative as possible,” said Kenneth Cole, whose mannequin is covered by a “social messaging” sign reading, “Underneath it all, you’re naked.”

Yeohlee Teng created an homage to the architecture in the fashion district with a brick-and-mortar, wedding cake-shaped figure reflecting how the buildings at a certain level are inset to let the sunlight stream in. Rebecca Moses designed a waterproof felt skirt with a hoop to keep its shape, with a mesh blouse and a reptile skin sash. Fashion Institute of Technology students Ariel Penzer and Christopher Ciaccia tiled over their mannequin for a ceramic look.

On the ephemeral side, Betsey Johnson dressed her mannequin in flowers. Victor Alfaro dressed his in a parachute and goggles, and Diane von Furstenberg painted hers in one of her classic prints and signed it “Love is Life.”

The mannequins will withstand the elements. “They are steel reinforced, and very thick because they need to be really heavy. They’re also sprayed with a catalyzed acrylic coating,” explained Michael Evert, sculptor at Ralph Pucci International, which created the mannequins. They’re also mounted on steel plates and concrete bases. The mannequins and what’s on them are being auctioned to benefit Materials for the Arts.