The Roman fashion house’s creative director of accessories, men’s wear and children’s wear was in town for the reopening of Fendi’s store in the Landmark mall. 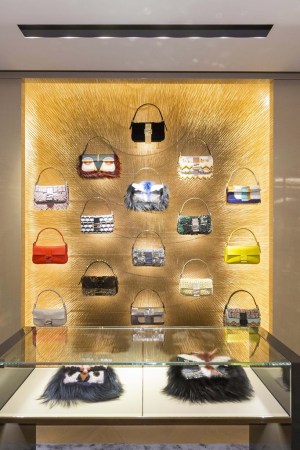 Landing early in the morning, Venturini Fendi was immediately impressed with the energy of the metropolis. “I was amazed. There was so much activity I would say it’s so different from Italy.” Often gaining inspiration from her trips, she added: “You always find beautiful new buildings and you see that things move fast here[…] I’m looking even when travelling by car and trying to grab every little detail. I like to watch people walking on the street.”

Spanning about 4,000 square feet, the newly renovated boutique was designed by Tokyo-based French architect Gwenael Nicolas and is the first of its kind in Asia. Following in the footsteps of the Roman brand’s flagships on Montenapoleone in Milan, Avenue Montaigne in Paris and Bond Street in London, it’s bedecked in travertine, leather, bronze and stone.

Located in the heart of the busy Central district, the store is a stone’s throw away from the protests, which recently clogged several of the city’s key retail districts. “I think it’s a delicate time,” said Venturini Fendi. “It’s not the easiest moment, but I think it’s important that we are here. It’s important that life goes on.”

To celebrate the renovation, the brand held a private dinner and opening cocktail for the traveling exhibition “Un Art Autre,” which landed in the city after stops in Tokyo and Beijing. The show features 12 fur garments ranging from a silk-screened Eskimo-inspired fur coat from the early Seventies to present-day pieces alongside accessories and a fur atelier in which artisans will do live demonstrations. Curated by Emanuela Nobile Mino, it was housed in a dramatic circular golden structure on the ground floor of the mall near the store entrance.

“We chose some of the iconic moments of our history to bring here,” explained Venturini Fendi, clad in a black sable scarf and black Ray-Ban Wayfarers. “It’s interesting for people to know more about us — the work, experimentation and exploration of new techniques.”

Known for its lavish furs and leathers, Fendi has been focusing on the greater China region for some time. According to Pietro Beccari, chairman and chief executive officer of Fendi, Chinese consumers rank in the brand’s top-three clientele alongside Americans and Japanese.

“To be honest with you, this store is number-one for fur [sales] worldwide,” Beccari said. “You wouldn’t expect it as winter is not very rigid here, but the Hong Kongese travel a lot and they have a very particular refined taste.”

In response to the interest, the brand expanded the boutique to add a special fur room designed with black lacquered walls and marble furniture. Fendi also expanded its men’s wear section and devoted a separate floor to the category.

“It’s a new target group and doing very well for now,” he said. “We are very serious about it.”

Venturini Fendi has been concentrating on Fendi’s men’s wear for some time and describes them as closely linked to the brand’s accessories. “It’s interesting because I’m a woman,” she said. “I’m very much attached to the idea that it’s a very masculine collection, but there is also a touch of fun there because the monster jacket has been a big hit.”

Alongside working on strengthening the brand’s men’s wear, she has been keeping an eye on Asia lately: “I’ve been watching the Korean designer Kwangho Lee. He’s very talented. In China, I adore Ai Wei Wei. He’s not only interesting as an artist, but also as a thinker.”

The brand, which has 135 units worldwide, is taking things up a notch in Asia. Last month, Fendi reopened a freestanding store in Matsuya Ginza in Tokyo and about a week ago, it unveiled a boutique in Seoul’s Lotte World Tower. Next month, Fendi will cut the ribbon on a store in Beijing’s Shin Kong Place and they will reopen their boutique in Shanghai’s Plaza 66 mall in the following month.

“We decided to concentrate on getting stronger where we already are, so we are looking at renovation rather than relocation,” explained Beccari.

One exception will be the opening of a store in New York on 57th and Madison Avenue with a new concept by Peter Marino in late November.

Asked how the ongoing political tensions in Hong Kong are affecting Mainland Chinese and local spending, he replied, “The movement here is, of course, hitting the business a little, but it’s already picking up quite well after the first heavy week. Now we see traffic increasing.”

Going forward, he said Hong Kong will continue to be a critical location for the brand. “The investment in terms of a new concept and a larger store is for us the start of a pattern — we want local clientele to become even bigger and more significant for us.”