Of the 328 brands that applied to show their fall collections at the event, 18 were selected. 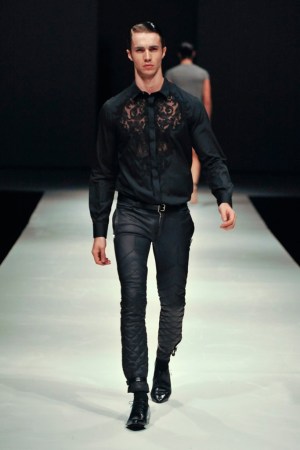 “Last year, I had to go and convince brands to attend,” said Cintamani, who selected 18 brands to show their fall collections here last week. “This year, 328 brands applied.”

Among the brands he selected was Songzio, one of Korea’s more prominent men’s wear labels. And although it doesn’t have a retail presence here, Spencer Hart, the British label favored by celebrities like Sean “Diddy” Combs, created 27 new pieces — largely black jackets with thin lapels and hacking pockets — for its first-ever show in Asia.

While the two brands stuck to conservative blacks and grays with the occasional touch of deep purple, this year’s event, the only dedicated men’s fashion week outside Europe, saw an extensive range of colors for winterwear. Singapore label Reckless Erika showed voluminous checked garments in vibrant reds and cerulean that were cinched at the waist, while the glam rock-influenced Japanese brand Diet Butcher Slim Skin previewed a black-based jacket with huge rose checks.

Southeast Asian men’s wear retail is sometimes regarded as a footnote in the Asian consumption story, but the numbers suggest it is enjoying consistent growth. According to Euromonitor, men’s clothing sales in Singapore jumped 19.3 percent last year. In Indonesia, the region’s largest economy, men’s clothing sales grew by 15.5 percent in 2011, following a 41.8 percent increase the previous year. And though growth was in the low- to midsingle digits last year, the market grew by 65 percent in Thailand and nearly 50 percent in Malaysia and the Philippines in the five years to 2011.

According to the Boston Consulting Group, with more than 15 percent of its households holding at least $1 million in assets, Singapore is now home to the highest proportion of millionaire households in the world. Despite a population of about 5.1 million, Singapore is one of Louis Vuitton’s top-five Asian markets.

The emergence of a middle class in Indonesia, once an economic basket case, also offers opportunities. Forecasts suggest the middle class, only 50 million strong in a country of 240 million, will swell to 150 million by 2014. And unlike other Asian countries, which typically boast high savings rates, consumption takes up close to 50 percent of Indonesia’s gross domestic product growth. The presence of 2 million more males than females under the age of 65 should also give men’s wear sales an edge.

“If only 1 percent of Indonesians enter the middle class every year, that’s two million new consumers,” said Douglas Benjamin, an executive director at FJ Benjamin, a regional distributor of brands like Banana Republic, Givenchy and Celine.

Growing tourist numbers also help. Malaysian government statistics show that visitors spent $18.4 billion there in 2010, up 55 percent from 2006. According to the Singapore Tourism Board, tourists spent $3.59 billion on shopping here in 2011, up 13 percent from the prior year.

Much of this spending is due to tourists visiting “integrated resorts,” essentially casinos with significant retail operations. Having attracted men’s wear labels like Zilli and Stefano Ricci to the region for the first time, the two-year-old Marina Bay Sands integrated resort in Singapore will later this year roll out a shopping zone dedicated to men, said John Postle, the Sands’ retail director. And after operating just one store in Manila for 15 years, Ascot Chang, a Hong Kong shirtmaker with operations in Beverly Hills and New York, opened a boutique in February at the Resorts World Manila. Sales in the Philippines this year should increase by 50 to 70 percent, said Tony Chang, Ascot Chang’s managing director.

One potential challenge lies in steadily appreciating local currencies. In the last five years, the Singapore dollar has strengthened by about 17 percent against the U.S. dollar while the Malaysian ringgit and Philippine peso have also appreciated more than 10 percent each. “As currencies get stronger, it will be more expensive for tourists in certain countries to visit and spend here and easier for locals to shop overseas,” said Benjamin.

Profit margins may also be hit by the weather. In steamy Southeast Asia, the best-selling men’s wear items are shirts and accessories like ties and cuff links. These are less pricy than jackets and boots, which typically generate bigger revenue but aren’t usually worn here, Benjamin said.