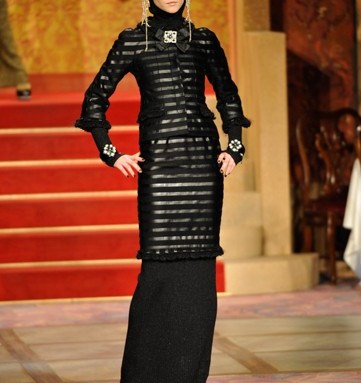 “Oh, he can do anything,” Marianne Faithfull cheered afterward, adding, “Well, he works very hard.” “Very good lighting — and very good dialogue,” Amira Casar nodded, turning to chat with Anna Mouglalis. They, along with Princess Caroline of Monaco and a host of French actresses, packed into the cozy, rickety Théâtre le Ranelagh, which Lagerfeld had decked out like the Twenties nightclub featured on-screen.

“Yet the movie, cast from Lagerfeld’s entourage of models, muses and seamstresses, did not at all overshadow the designer’s formidable faculties in the fashion department. Economy be darned, this was one extravagant production, with the collection’s every item channeling the unmistakable look and pulse of Russia, from onion-domed gold heels and astrakhan muffs to fantasy folkloric headdresses by Japanese wizard Kamo.

“There are three things I like about Russia,” Lagerfeld had enumerated during fittings at Rue Cambon on Tuesday, as the pale model Vlada Roslyakova glided in wearing a fluffy knit ensemble. “I love Imperial Russia, from Catherine the Great to Fabergé. I love constructivism, of course. And I love Russian folklore, which is very special. What was fun was to mix it all.” Indeed, he covered a lot of ground, showing everything from a strikingly simple coat with a shawl collar and sloping babushka shoulders to tweed suits with military airs and geometric trim. Fashion news included lots of tubular or fluffy knits, a tiered silhouette and a rush of gold that dazzled boots and metallic Cossack trousers. The glimmering brocades, fur trims and luscious embroideries added up to a fashion feast as rich, or some might say as heavy, as a caviar-topped potato. “It looked very couture to me,” opined Diane Kruger, about to head back to Berlin, where she’s shooting a Quentin Tarantino film in which she plays “a German movie star that’s a spy for the British.”

Lagerfeld launched Chanel’s métiers d’art collection in 2002 as a way to showcase the skills of the house-owned specialty couture ateliers, pioneering a trend to hyper-luxury and fanning pre-collection mania. Asked if he had any pause showing such expensive and opulent clothes at a moment of economic crisis, he waved off the question. “These dresses come out in six or seven months from now, and the world may have changed by then,” he said. And besides, not every look was dripping with splendor. “There are very simple jersey dresses, too,” he noted, “but the way it’s shown, it’s not a bore.”

Ever the forward thinker, Lagerfeld already has designs on what he’ll do one year hence: “Shanghai Express — the trip [Chanel] never made,” he said, flashing a big, imperial smile.