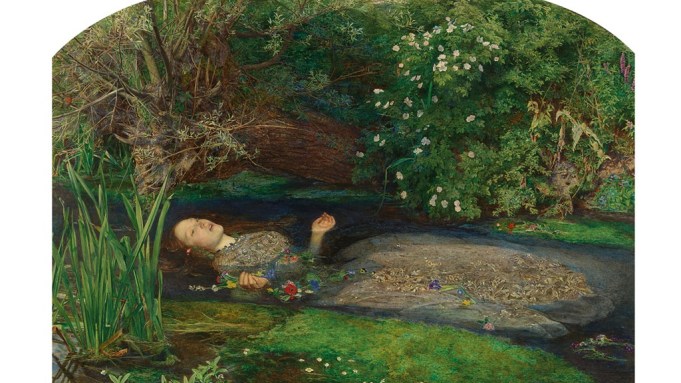 The paintings of the Pre-Raphaelites were shockers in their day, unnerving prudish Victorians with images of powerful, full-lipped muscular women swathed in diaphanous, alluring fabrics.

These days, however, with growing ranks of female senators, military personnel, and at least one likely presidential candidate in the wings, Pre-Raphaelite models are garnering a warmer response. As Washington’s most powerful women step out of their pantsuits into softer, suppler designs, Pre-Raphaelite paintings show how power sometimes resides in using fashion to charm rather than keep score. So the National Gallery’s new exhibition, “Pre-Raphaelites: Victorian Art and Design, 1848-1900,” couldn’t be better timed.

Known as the PRB, or Pre-Raphaelite Brotherhood, the artists and their models began as a band of 19- and 20-year-old bohemian upstarts determined to undermine the official maxim that great art reached its zenith in the work of Italian Renaissance artist Raphael. In September 1848 in London, Dante Gabriel Rossetti, William Holman Hunt, John Everett Millais and Ford Madox Ford issued their manifesto mixing natural realism with medieval culture to create Britain’s first avant-garde movement. Second generation followers gathered around Rossetti, including Edward Burne-Jones and William Morris.

“The image of female power for the Pre-Raphaelites was the femme fatale, always seen from a male point of view,” says Tim Barringer, Yale University’s Paul Mellon Professor of the History of Art and a cocurator of the show. “But these women resist the domination of the male gaze. They look right back at you. With their huge heads and long necks, these are powerful women, all very different from the Victorian stereotype, the submissive doll, like child brides of Charles Dickens.”

Reflected through the prism of Washington’s current fractious political climate, the artists and their works offer a take on womanhood that contains lessons for today’s female leaders: how to mix contradictory styles to stake their claim as modern-day warrior queens.

“Creating yourself was particularly important for the Pre-Raphaelites,’’ says Diane Waggoner, associate curator of this first major U.S. survey of the movement. That same notion, she says, may have inspired Hillary Rodham Clinton after she lost the Democratic nomination in 2008 to Barack Obama. “Hillary Clinton has softened her look,’’ says Waggoner, who studied with Barringer at Yale.

And though Waggoner herself had yet to see the Oscar-nominated “Zero Dark Thirty,” in which Jessica Chastain plays a fearless CIA operative out to seek justice against Osama Bin Laden, she agrees Chastain definitely has the ultra-feminine warrior look made famous by the Pre-Raphaelite Brotherhood.

“When Chastain wore that great Alexander McQueen dress to the Oscars last year, that was a Pre-Raphaelite dress, very sumptuous, with the brocade,” says Waggoner.

The PRBs have influenced fashion almost from the moment the paint was dry on the movement’s first canvas. Take Dries Van Noten’s spring ready-to-wear line with its diaphanous looks, which Waggoner compares to Hunt’s “Isabella and the Pot of Basil.” With its semitransparent, diaphanous allure, the painting, inspired by John Keats’ poem reworking Boccaccio’s 1351 “Decameron,” demonstrates Pre-Raphaelite dedication to the medieval tradition.

And what about all the metrosexual knights that surround Guinevere in the creations inspired by the legend of King Arthur and the Knights of the Round Table?

“Men’s fashion is even more interesting, with each of these men being dandies in their own right,” says Waggoner. The Pre-Raphaelites, she says, collected costumes and jewelry to use in their creations, though not in their everyday life. With one notable exception, she says: “William Holman Hunt affected Eastern dress. He journeyed to the Holy Lands to paint his religious pictures at the sites where they had taken place. And when he came back, he adopted Eastern dress.”

The National Gallery has always had a knack for crystallizing a political moment. “The Treasure Houses of Britain” did it with the over-the-top opulence of Ronald Reagan’s roaring Eighties. A decade later, the blockbuster Johannes Vermeer show showcased the intimacy of power and wealth behind closed doors. Now the Pre-Raphaelites are focusing the spotlight on the way American women are using fashion to showcase a new, more confident power statement without the use of padded shoulders, pantsuits and briefcases.

The movement was threatening enough to proper Victorians to make Dickens sound like a Tea Party activist. Railing against Millais’ depiction of Mary in his painting “Christ in the House of His Parents (The Carpenter’s Shop) 1849-1850,” Dickens castigated the portrait as an image “so horrible in her ugliness that…she would stand out from the rest of the company as a monster, in the vilest cabaret in France, or the lowest gin shop in England.”

Just as the Pre-Raphaelites loved large beaded necklaces to show their power, so are Washington’s most powerful women choosing big beaded necklaces to flash their might, led by House Minority Leader Nancy Pelosi, who showed up at President Obama’s State of the Union address wearing her signature quail-egg size pearls. Pre-Raphaelite artists also showed off the powerful arms of the women they admired, much like First Lady Michelle Obama with her penchant for languid, opalescent fabrics, soft shoulders and her signature biceps.

“Julianne Moore definitely has the look with the red-haired coloring, and Pre-Raphaelite Helena Bonham Carter stands out the way a Pre-Raphaelite would have, though she’s tiny and most of them were tall,” Waggoner says of other celebrities who epitomize the era.

“The Pre-Raphaelite aesthetic was very much about dressing differently than most of Victorian society,” she continues. “Jane Morris in the forefront of aesthetic dress, is shown not wearing a corset with a very flowing dress, long neck and long hair, not really buxom, more languid and lithe. It was the kind of dress that got adopted later with everyone shopping at Liberty with sumptuous fabrics and flowing brocades.

“Look at Rossetti’s women, even Millais’,” says Waggoner standing in the Mythologies Room, one of eight theme rooms into which the show is divided. “They are very strong warriors with a softness that by no means follows the mainstream of what goes for beautiful. Tall women with fleshy strong features, thick lips, lush sumptuous fabrics, and big, chunky jewelry — these are things the artists themselves collected, as a sense of costume. Together everything combines to create a new aesthetic.”