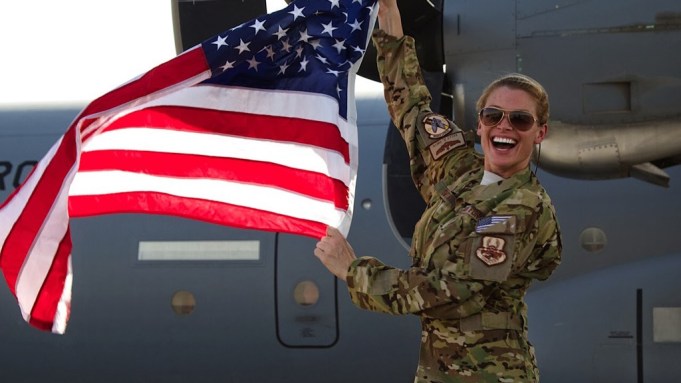 “I’ll put on heels and maybe look a little wobbly, but I’ll strut my stuff to raise awareness,” said Major Chelinda Rivas of the U.S. Army.

Rivas is one of 15 female military servicewomen who will participate in “Salute the Runway,” a fashion show that will open New York Fashion Week in the tents of Lincoln Center on Sept. 3.

The show is a culmination of a program held at military bases around the country raising awareness of the challenges facing military servicewomen as they transition back to civilian life. It is sponsored by Little Black Dress Wines and Fatigues to Fabulous, a national campaign designed to support women serving in the U.S. military and the issues they face — from medical, housing and employment to being appropriately dressed.

At present, there are about 214,000 women on active duty, representing 14.6 percent of military personnel, and about 1.8 million female veterans. Participants in “Salute the Runway” are a combination of female veterans and active-duty members, recruited from the Tristate area and other parts of the country. The women hail from the U.S. Army, Air Force, Navy, Marine Corps and Coast Guard, with ranks such as major, sergeant, captain, lance corporal, tech sergeant and lieutenant commander.

Each of the 15 servicewomen will model different variations of the iconic little black dress. Their sizes range from 2 to 12. Participating design houses include DKNY, Calvin Klein, Carmen Marc Valvo and Mara Hoffman. In addition, historic uniforms dating back to World War I will be on display from the Women in Military Service for America Memorial Foundation in Washington.

Asked how she got involved, Rivas, from Fort Bliss, Tex., told WWD that she saw Fatigues to Fabulous advertised on the army base and did a little digging to find out the campaign supports female veterans as they transition out of service into civilian life. She signed up to be part of its sponsored fashion show at Fort Bliss, and was selected in a random drawing to go to New York.

“It was really fun and a little bit nerve-wracking. I have never modeled before and to go from boots to heels…I am by no means a heels girl. I kept saying to myself, ‘Please don’t let me fall off this runway,’’’ said Rivas.

Another show participant is Nancy Schiliro, 34, a former Marine who lost an eye in an explosion in Iraq and works for the Wounded Warrior Project. She is studying for her Master’s degree in Mental Health Counseling.

“I’m such a tomboy, especially being a Marine,” said Schiliro, who lives in Scarsdale, N.Y. But she said she’s anticipating the opportunity to “smile and put on some makeup and feel like a woman.” Schiliro, who was married in May (her husband is in the Air Force and will be deployed in September), said, “I’m going from boots to heels. I’m not a heel person. But if I could climb through barbed wire, I can pull off walking in heels.”

Stacy Pearsall, 34 a retired staff sergeant who was wounded in Iraq, is looking forward to her runway debut.

“I’ve spent most of my time in uniform and this is my first attempt to walk the runway,” said Pearsall. She said she suffered some head trauma “so walking in heels could be a feat in itself.”

She added, “This is an opportunity to show folks it’s not just men who serve. Women are out there doing the hard jobs, too. I want to bring awareness to female veterans and what they do for their country.”

Pearsall, who lives in Charleston, S.C., founded the Veterans Portrait Project (veteransportraitproject.com), and travels around the country photographing veterans. She recalled after being wounded in Iraq, she was sitting in a Veterans Administration waiting room and one of the attendants thought she was bringing her grandfather into a doctor’s appointment. “I’m the veteran,” she said. “They’re not used to seeing ladies.”

As for New York, Pearsall is an enthusiast. “I love fashion. I’m a size 12 and I’m not a beautiful, tall girl you usually see on the runway, but I can hold my own. I’ll either make it down the runway unscathed or fall flat on my face. Either way, people will be entertained,” she said.

Leslie Nicole Smith, 45, a retired Army captain from King George, Va., is also walking in the New York show. She is a legally blind amputee who advocates for veterans. She was serving in Bosnia in 2001 when a blood clot formed that resulted in the loss of her left leg and sight. Smith previously appeared, along with her service dog, Isaac, on “Project Runway All Stars — Stars and Stripes” in January 2013.

“This campaign is a wonderful opportunity to support female veterans throughout the country,” said Smith, who is also the campaign spokeswoman. “By joining together with Little Black Dress Wines, we are able to raise awareness of the issues surrounding women veteran reintegration, acknowledge their heroic service, and highlight the versatility of the little black dress and how this wardrobe staple can help women veterans’ transition from military service.”

Smith said her initial runway experience on “Project Runway All Stars” “was an incredible experience, and I was hooked.” She walked the runway on the TV show in a short cocktail dress designed by contestant Joshua McKinley, and viewers could see her prosthetic. “It doesn’t mean you can’t be feminine and beautiful and still wear beautiful clothes,” said Smith. At the Sept. 3 fashion show, Smith will model McKinley’s dress again.

Participating designers are keen on raising awareness of the transitional challenges veterans face.

Valvo said he got involved in the fashion show because of his friendship with Fatigues to Fabulous creator Ronnie Denn, who was also the cocreator of the Red Dress/Heart Truth campaign. “I’ve known her for well over a decade,” he said. When she approached him about the new organization she founded in 2011, Fatigues to Fabulous, “I said absolutely,” said Valvo.

“Some of these women have been in the service for 20 years and have spent their entire careers there, and when they leave the service they have to be reintroduced to a different society,” said Valvo. They frequently don’t fit in and need to get accustomed to their new life. He said that by participating in the fashion show, it helps them embrace their femininity and beauty.

“It’s something they’ve forsaken for a long time. We can empower them in a different way and help them rediscover who they were. They’re used to fatigues and combat boots and not carrying lipstick, wearing a dress and killer heels,” said Valvo. “Their stories are so compelling and they’ve sacrificed so much for us. They’re the unsung heroes to a certain extent.”

“It’s an honor to contribute to this initiative in support of such strong, modern-day warrior women — individuals who have taken the path less chosen and devoted themselves to a life of bravery and selflessness,” added Hoffman.

Calvin Klein confirmed its participation, noting that the servicewoman will be wearing a Calvin Klein dress designed by Kevin Carrigan.

And DKNY is loaning a dress to the event. “It’s a great initiative to bring awareness to servicewomen,” said a DKNY spokeswoman.

As part of the campaign, “Salute the Runway” has produced fashion shows on military bases, including Fort Bliss in El Paso, Fort Hood in Killeen, Tex., and joint base Lewis-McChord in Tacoma, Wash.

Each of the servicewomen will be styled by the design house that is loaning the dress. Professional models from IMG Models will coach the military servicewomen on how to walk the runway.

According to Denn, the impetus for Fatigues to Fabulous occurred after she read an article about women coming out of the service and discovered that women are given size 8 men’s boots when they leave and aren’t given proper medical attention. “Out of my brain came Fatigues to Fabulous. The point of it is to raise awareness of women’s issues that are completely different from men’s,” said Denn.

Asked whether she feels it’s demeaning to put servicewomen on the catwalk, she felt just the opposite.

Donations to Fatigues to Fabulous can be made through the event cosponsor Shout. Shout is an app-based, micro donation platform designed to raise funds for the organization. The app will launch in the U.S. at the Sept. 3 “Salute the Runway” event and will be free to download on the Apple App Store. The F2F campaign supports three nonprofit organizations: Society for Women’s Health Research, Grace After Fire and Save a Suit Foundation.