The French fashion house has set in motion a three-pronged strategy for development under new majority owner Fung Brands Ltd. 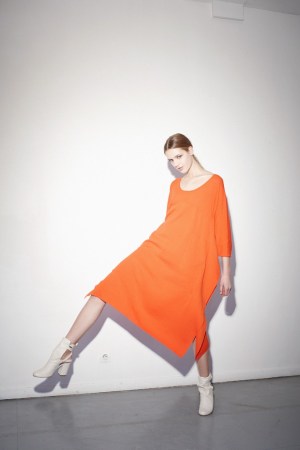 Chief executive officer Eric Langon, who joined the company in April, said his priorities were to modernize the main Sonia Rykiel collection, reposition the Sonia by Sonia Rykiel contemporary line and grow the share of accessories.

“The Rykiel woman is desirable, intense, playful and intelligent,” he told WWD at the company’s headquarters on Boulevard Saint-Germain, where construction workers could be heard putting the finishing touches on da Conceicao’s studio on the floor above. The designer, who has worked at Louis Vuitton, Miu Miu and Yves Saint Laurent, will show his first collection during Paris Fashion Week in March.

“We want to emphasize the modernity of the Rykiel woman, not only in terms of this typically Parisian chic, but also in terms of values, which are now very modern and international,” Langon said.

He noted that da Conceicao, a Canadian national born in Macau, would bring a distinctly cosmopolitan outlook to the main Sonia Rykiel line. Langon has split the creative team, setting up a separate office for the Sonia by Sonia Rykiel line to better keep their identities distinct.

Langon said distribution and merchandising of the two collections would be revised to make sure they don’t sit side by side within the same point of sale, though he was reluctant to define separate target groups for the lines, saying a woman could wear both at different times.

Sonia Rykiel’s new product and merchandising director Sophie Templier, formerly at Chloé, is also overseeing efforts to grow the leather goods business, which has lost steam since the success of the rhinestone-studded Domino bag a decade ago.

Langon said it was unlikely the category would ever account for the lion’s share of revenues at Rykiel, as is the case at many luxury brands. “That is not our objective. But since leather goods is a legitimate product category in the Rykiel universe, there is definitely enough room to double or even triple its share of the house’s total revenues,” he said.

The executive said plans for expansion in the U.S., where the brand is carried in about 20 points of sale, were on hold until it has restructured its offer. Likewise, its e-commerce site has been shut down, pending a relaunch scheduled for November 2013.

Langon has appointed a digital director, noting that Sonia Rykiel is so far absent from social-media sites. “I want to implement a content-oriented digital strategy, because this house is very rich in content. It has a lot of depth, and it’s important we share this history on the Web in a way that gives it a modern spin,” he said.