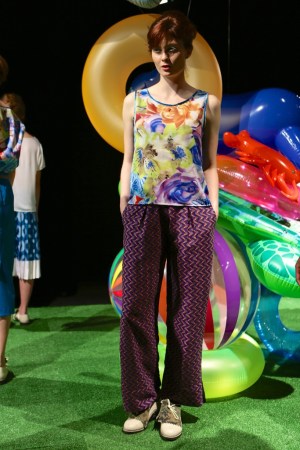 JOHANNESBURG — Barely had one fashion week ended in Johannesburg when another began.

As if the schedules of the competing fashion weeks in the country weren’t maddening enough, the seasons each one showcased caused confusion, raising the question: Is the South African fashion industry really big enough to accommodate two fashion weeks?

In one corner, showing spring-summer 2014-15, was the 15-year-old veteran South African Fashion Week, or SAFW, founded and spearheaded by former schoolteacher and model-turned-industry champion Lucilla Booyzen. SAFW boasts its own roster of designers both established and emerging. For many of South Africa’s major designers, SAFW was the platform that launched their careers, such as Jacques van der Watt of Black Coffee, Thula Sindi, Amanda Laird Cherry and Palesa Mokubung. Credit also must go to Booyzen for working to create a buyer culture in South Africa; many of her initiatives have resulted in successful partnerships between retailers and designers, the most notable of which is the dedicated retail space in select branches of the national department-store chain Edgars for SAFW designers.

In the other corner, 10 days later and showing fall, was Mercedes-Benz Fashion Week Joburg, organized by African Fashion International, or AFI. The company has had several short-lived and controversial partnerships since it was established seven years ago; its current relationship with Mercedes-Benz is in its third year. Established designers such as Marianne Fassler, David Tlale, Gavin Rajah and KLûK CGDT decamped from SAFW to show with AFI, which also organizes MBFW Cape Town and MBFW Africa, which also has an awards ceremony headlined by top designers from across the African continent as well as the African diaspora.

Few industry insiders were willing to go on the record about the conflicting shows. Veteran stylist and fashion editor Jenny Andrew felt that “they are two very different platforms. First of all, AFI is showing autumn-winter now [for the period April-August in the Southern Hemisphere]. Basically it means that designers are making one-offs that are being bought by their specific clients, whereas SAFW is showing six months ahead of the season and has the stronger buyer culture. So it does give designers a reasonable time frame in which to deliver on their orders. Some designers who show at AFI don’t perhaps want to supply 20 of this or 60 of that to some boutique. They’re happy to dress individual clients instead.”

Albertus Swanepoel is one designer who has enjoyed steady growth in sales to stores all over the country since he began showing at SAFW three seasons ago. The South African-born, New York-based designer’s latest collection was his most relaxed yet, featuring riotous tropical print panels alongside ethnic African shweshwe fabrics in looser, less structured shapes — think basketball shorts, easy tunic dresses and circle skirts, which he paired with brogues whose surprise element were the kilts rendered in shweshwe.

“I am proud of the fact that everything in this collection is made in South Africa,” Swanepoel said. “Even the shoes, which were made by a factory in Pietermaritzburg, came out so fantastically well. I was really impressed.”

He referred to his collection as “From Hoedspruit to Hawaii,” a mash-up that pays homage to his own Afrikaner background, as well as that of his long-time partner, who was from Hawaii. “I just want to have more fun, add in a lot more color. I love mixing things up,” he said.

Showroom agent Annette Pringle, who set up The Fashion Agent almost two years ago to represent several designers and now has more than 500 countrywide buyers on her database, said of the show, “Albertus is selling really well, and this collection will be very well received; it is optimistic, vibrant and easy to wear. His last collection, in fact, for this coming autumn-winter season, which will be delivered to stores April 15, sold exceptionally well, particularly his fur coats, which will retail for around 7,900 South African rands [$750] for the full-length version. We received orders for a total of 50 units in three sizes, which is a lot for this market.”

Swanepoel was not the only designer who infused a sense of nationalism into his designs. As South Africa celebrates 20 years of democracy, freedom was a common theme through several collections, such as Fassler, whose collection at AFI was called #Vote Fassler, while Tlale showed a “Protest” collection replete with “protesters” carrying placards that bore patriotic messages like “SA Is the Future” and “Africa Is Now.”

Over at SAFW, Fundudzi by Craig Jacobs made history by presenting his collection, titled “Freedom20,” with the OR Tambo International Airport as the runway, a symbolic nod to the many airline journeys that have gone into the building of the new South Africa.

Jacobs’ point of departure was the South African flag, using shweshwe and Venda fabrics to punctuate the collection. His goal with fashion is to “always reflect what’s going on in society. For me, I wanted to highlight a milestone of South African history in a modern, subtle and understated way.”