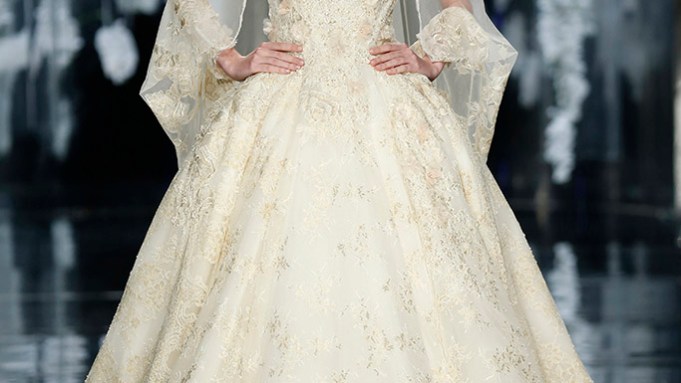 BARCELONA — One of the recovering Spanish economy’s strongest sectors, bridal is on the move.

Last year’s exports — wedding gowns only — climbed 16.4 percent over 2013 to sales of 507 million euros, or $571 million at current exchange. Total bridal-related shipments, including wedding and special occasion dresses, men’s wear and accessories, totaled 877 million euros, or $988 million, an increase of 22.4 percent over the previous year, according to a report by the Barcelona-based Textile and Apparel Information Center.

The biggest markets are Italy, France and Germany, said Miquel Serrano, director of Barcelona Bridal Week, which ran May 5 to 10 in the Gran Via 2 fairgrounds. “We have everything here, big companies and small ones. We have to tell the rest of the world about our quality and handwork. Everything is Spain-made, from the embroideries to the stones. Our goal is to establish Barcelona as the bridal capital of the world by 2018 — and the U.S. is key to our expansion plans,” he said.

To that end, Bridal Week invited a group of New York fashion editors and as part of a special buyers program, 165 global retailers, mainly from Italy, the U.K., Qatar and Germany, plus an additional 23 from the U.S. — or four times more foreign buyers than last year’s edition. The U.S. was the week’s featured guest. “We’re using this 25th anniversary to get the message across that there’s been a change, including 85 new international brands chosen for the product’s quality and nothing else,” Serrano added.

Traditionally, there are two parts to Bridal Week: Designers’ runway shows (23 of them in this case) going on in tandem with the trade fair, made up of 230 vendors, half of which were from 15 different countries. Stretching more than 322,917 square feet, the dual event drew 16,000 visitors, 60 percent of whom were from overseas.

Bridal Week’s first-ever guest designer, Katharine Polk, designer and owner of Houghton in New York, sent out her versatile gypsy bohemian aesthetic in contemporary, easy silhouettes and pretty laces with a dab of pink or sand. “The Houghton bride is a free-spirited fashion girl, aged 25 to 35; we don’t have an extremely young client,” she said. “And I’m inspired by Katharine Hepburn. There is always a wide-legged pant in my collection and never a short, tight low-cut dress.”

Weddings in the U.S. are “definitely picking up steam,” Polk added, “And in general, we brought in about 22 new accounts last year.” What she called “huge” markets for her brand are Australia and London, and “we’d love to open in Spain; that’s why we’re here.”