With few exceptions, Spanish designers who showed during Mercedes-Benz Fashion Week Madrid said they are feeling the squeeze. 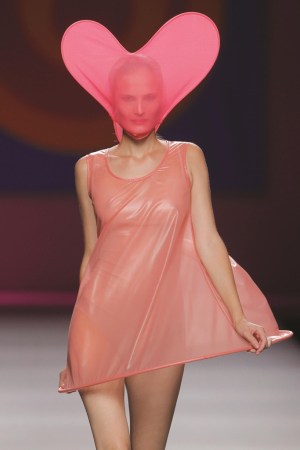 The Spanish government is imposing stiff austerity measures that include a new 21 percent sales tax, while the already-staggering unemployment rate could climb an additional 2 points to 26.5 percent by the end of next year, according to local media reports.

Echoing the mood of the industry, Fernando Aguirre, managing director of Agatha Ruiz de la Prada, said, “I am super depressed about current economic conditions, especially the paralysis in domestic spending,” which has reportedly shrunk 25 percent in five years.

With upward of 43 licenses, Ruiz de la Prada sells to more than 120 markets. “We are lucky to have a strong international business, but quantities in some of those countries are very limited,” Aguirre said. “We are currently developing a few South American markets, but generally speaking, our retail expansion projects are on hold.”

With few exceptions, Spanish designers — most of whom showed during Mercedes-Benz Fashion Week Madrid that ran Aug. 30 to Sept. 4 in the fairgrounds here — said the only way out is reinvention, “because we can’t compete with low-cost [producers] or commercial centers; and domestic multibrand stores aren’t selling a lot and they don’t pay,” said Madrid designer Juan Duyos. The answer, he concluded, is “a return to our roots, meaning made-to-measure clothes and handwork.”

With a $4 million budget, comparable to recent editions, the five-day event featured 41 designers (three fewer than in February), including a batch of 20 up-and-comers under the banner El Ego. Major dropouts this season were swimwear/lingerie manufacturer Andrés Sardá and London-based Elisa Palomino. Adolfo Domínguez hasn’t staged a runway show here in several seasons and reportedly the Galician brand shuttered 32 stores, including company-owned and franchised, earlier this year.

Fashion week’s most anticipated show was Delpozo, formerly Jesús del Pozo. The designer died a year ago and the creative mantle passed to Josep Font. For the first time in Spanish ready-to-wear history, a label is surviving without its founder.

Font’s sense of refinement fits in with Delpozo’s DNA. Showing outside the fairgrounds in the Parque El Capricho gardens skirting Madrid, the Barcelona designer sent out a romantic collection that press notes dubbed prêt-à-couture with ingenue silhouettes; intricate hand-embroideries; lace; airy, see-through fabrics; peplums for party dresses; pants that were roomy in the hip and tapered, and pouf skirts and shorts in white and either soft neutral colors or strong brights like coral, yellow and blue.

New owner Perfumes y Diseño is re-energizing the brand with an international expansion plan that includes joining a U.S. showroom in Manhattan’s Meatpacking District. Also on the drawing board is a Madrid store to open in March with a full-product range (ready-to-wear, bridal, accessories and fragrances, of which there are a total of 15 for women and men), confirmed Maria Peñacoba, Delpozo communications manager.

To drive sales, designers here say they are actively pursuing online initiatives in lieu of freestanding stores. For instance, Amaya Arzuaga, one of the few with a vigorous export market, said she averages between 10 and 15 Internet sales a day and 35,000 hits a month. The brand is marketed in 29 countries, with China the principal overseas market, she added.

At fashion week, Arzuaga featured her bridge line, AA, made up of variations on the classic white poplin shirt; what she called “suspension skirts”; short sheath dresses in duchesse satin with a little volume play, and draped effects and back focus — open or none-at-all — in pink, black and white.

On Oct. 1, she’ll show her namesake collection at the Spanish Embassy in Paris, where she has a showroom and press office.

Roberto Verino revealed the launch of an online sales initiative due next month and in the meantime, the Galician designer’s “Garden of Passion” theme referenced Spain with oversize floral prints; Chantilly lace; theatrical ruffles and flounces in black and red; also high-rise pants, bold graphic prints, and one of his signature looks, the short belted trench.

De la Prada was up to her old tricks with vinyl inner tubes, a dress that looked like a layer cake and multiple heart motifs. To her signature citrus palette, she added softer combinations like pastel pink and peach.

Also on the Madrid runways — and worth noting — was some standout swimwear, including skimpy bikinis and spirited multicolored prints by veteran manufacturers Dolores Cortés and Guillermina Baeza.