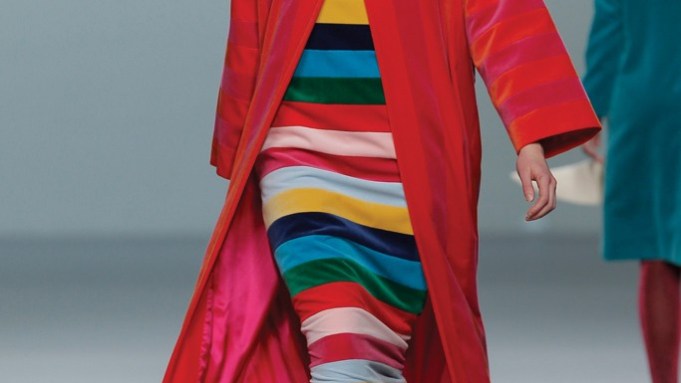 MADRID — The situation couldn’t be worse: Consumer spending is on the skids, unemployment reached 26 percent last year and the government instituted a string of austerity measures.

Still, the show went on. Mercedes-Benz Fashion Week Madrid, with a budget of about $4 million, ran Feb. 18 to 22 in the fairgrounds here. The five-day event featured 42 runway shows (two fewer than last February), including a group of 10 up-and-comers under the banner El Ego.

Organized by IFEMA, a self-financed public consortium, 60 percent of MBFWM is under-written by such sponsors as the German automobile company, cosmetics firm L’Oréal and, for the second season, Inditex, owner of the retail chain Zara. An additional 30 percent is put up by IFEMA, and roughly 5 percent is generated through participating designers who pay an entrance fee of 4,000 euros, or $5,300 at current exchange.

Buyers came from Russia, the Far East, Portugal and the Czech Republic, confirmed an IFEMA spokeswoman.

With sharp cuts in government subsidies and a deepening recession, Spanish designers are financially strapped. The latest casualty is Madrid-based Joaquín Trías, whose architectural shaping garnered a flurry of international attention in the U.S. and Paris. Trías shuttered his business earlier this month.

On the brink of suspending payments are veterans Victorio & Lucchino (Seville-based designers, they dress the Duchess of Alba) and Devota & Lomba. Owner Modesto Lomba, who is also president of ACME, the Spanish fashion designers association, said he was banking on 10 licensing agreements — purportedly down from as many as 28 — including bridal gowns, handbags and bed linens, to help make it through.

ACME executive director Lucía Cordeiro predicted both brands would survive “if they restructure and change existing corporate and labor strategies. Licenses have to be maintained, suppliers nurtured and foreign trade actively pursued. Purchasing is down and, in general, the domestic market is asphyxiating,” she concluded.

Energized export targets and hard work are the solutions to keeping ahead of the game, designers agreed. “Selling to international markets is the only way out,” said Aitor Muñoz, co-owner and commercial director of Ailanto, a Barcelona-based label with accounts in the U.S. and Japan, and expansion plans that kick off next month aimed at accelerating the brand’s retail presence in China, Southeast Asia and Saudi Arabia. “With the crisis here, you have to work double or triple hard to achieve the same results as before,” he added.

Roberto Verino maxed out on high glamour and glitzy metallic fabrics and fur on hoods, handbags, jackets, coats, boots, cuffs, even epaulets — a nod to the Seventies and Marisa Berenson, according to press notes —along with cropped pants in silky jacquards, velvet flocking on sheer chiffon and a little one-piece dressing. Not one to stand still, Verino will launch a 12th women’s fragrance called Pure in June for domestic and international markets, particularly Russia and Mexico, and in Barcelona he’s relocated to a 1,938-square-foot location off shop-heavy Paseo de Gracia.

Agatha Ruiz de la Prada filled the runway with velvet and signature hearts — cutouts, pockets, even heart-masked faces; stripes, including a skinny dress of many colors and floor-sweeping coat; color-blocked dresses, and an ivory wedding gown covered in velvet snippets.

Catalan designer Teresa Helbig came up with one of the week’s most coherent statements — a girlish lineup of minidresses and micro shorts, cropped pants, exclusive glitter fabrics, beading, handwork and leather. Mainly in black and pink, tailored silhouettes referenced Op Art. Helbig, whose business is based on custom-made, said she is testing export waters in Russia, Japan and South Korea with an online initiative expected to launch later this year.

With her bridge line AA, Amaya Arzuaga minimized signature volume and construction opting for wearable clothes like two-tone dresses with a slightly fuller shape in red or camel and black. She’ll show her namesake collection March 4, during Semaine des Créatures, at the Spanish Embassy in Paris.

In his Madrid debut, Rabaneda — by fashion week’s youngest designer, 26-year-old Daniel Rabaneda — showed some spunk, including a stronger shoulder, asymmetrical cuts, and graphic material mixes, such as Neoprene and waterproofed fabrics.

There was a lot going on with Maria Barros’ jazz-inspired grouping of pencil-thin silhouettes and longer lengths in brazen shades of fuchsia and mustard, including peplums and turbans. The Galician designer sells through multibrand stores in Spain, Italy, Kuwait and Saudi Arabia.