Both show how the brand reflected the changes in society.

MILAN — Sportmax is marking its 50th anniversary in 2019 with a dedicated anniversary capsule and a book published by Assouline.

“The book stems from the idea to chronologically retrace moments in history that were reflected by Sportmax, which has always been part of its times, music, architecture and politics,” Maria Giulia Prezioso Maramotti, retail director of parent company Max Mara Fashion Group, said in an interview.

The book — divided into five decades, from the Seventies to today and unveiled in London on Wednesday evening — illustrates the work of major fashion photographers who collaborated with the brand, from Sarah Moon and Peter Lindbergh to David Sims, whose image of model Kiki Willems was chosen for the book cover. The tome, which costs $195, includes some previously unpublished documentation, with drawings, backstage photos, editorials and campaigns, as well as a series of special images in which the French photographer Grégoire Alexandre interprets a selection of signature garments from the Seventies until today. French artist Aurore de la Morinerie created a number of illustrations inspired by Sportmax and featured in the Assouline book. 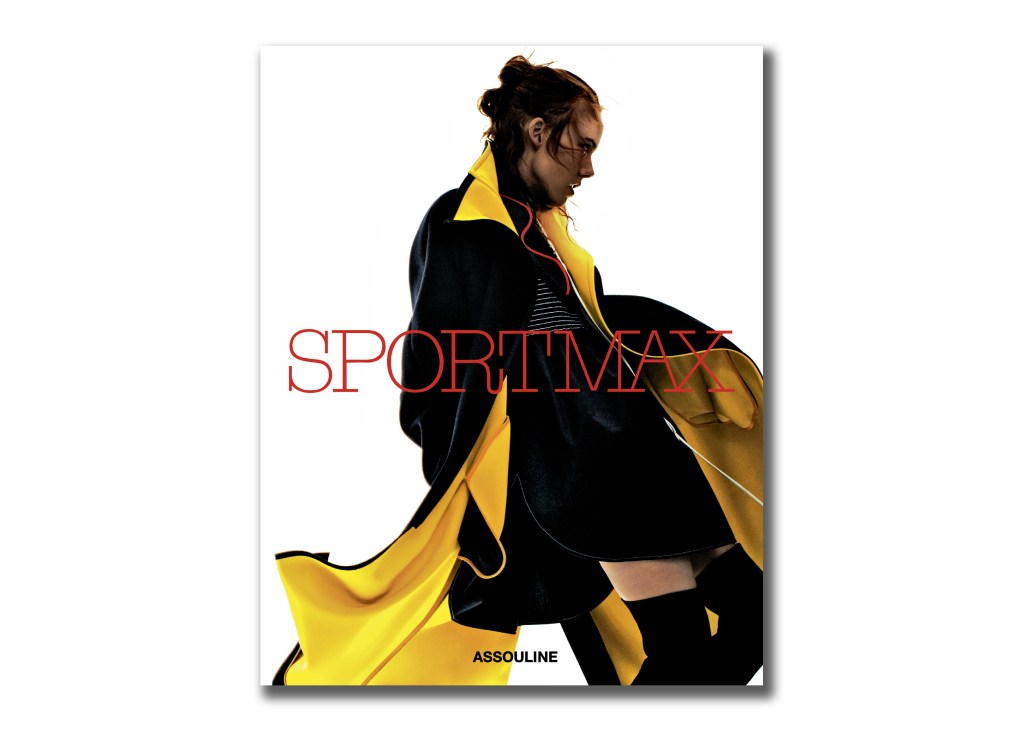 The cover of the Sportmax book by Assouline.  courtesy image

In 1965, the late Achille Maramotti, who founded Max Mara in 1951, launched a line called Pop aimed at a younger customer and in line with the emerging trends, laying the foundations for Sportmax, which was created in 1969. For Sportmax, he thought of a coordinated wardrobe of garments purchased separately and mixed and matched in a first example of total look, inspired by both a sportswear trend that was beginning to be popular in the U.S., and by the idea of free, young fashion in Swinging London, interpreting the changes in society. It was the more experimental designer collection of the Max Mara Fashion Group.

“Let’s not forget that tailors were the alternative to a total look,” Prezioso Maramotti said. Asked if the total look offer is still an asset today, at a time when customers’ loyalty is fickle and high and low, brands and styles are combined and juxtaposed, she said she believes “that total looks are still important. It’s a way for the brand to reaffirm its identity.” At the same time, the single items need to be able to stand on their own and be adapted depending on the customer and the occasion, she mused. “The Sportmax customer is not only price-conscious and informed, but also an individualist who chooses clothes according to her own taste.” 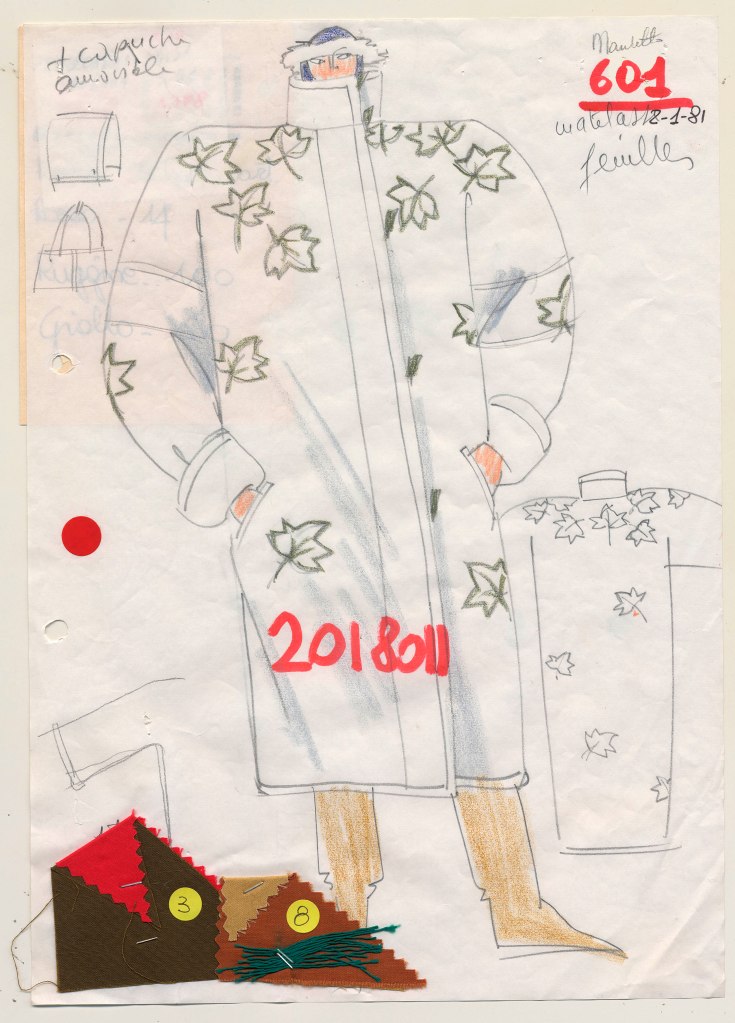 A sketch by Odile Lancon from the anniversary book.  courtesy image

Harking back to its Seventies heritage, the anniversary collection reinterprets a special shaded stitching that formed a recognizable decorative sign used to create ultra-light coats with bright colors. The capsule is made up of 15 pieces, including coats, jackets, dresses, shirts and knitwear — all matching to create a coordinated wardrobe.

The capsule, which is completed with accessories such as hats, a shoulder bag, sneakers and eyewear, plays on three colors — emerald green, deep red and marine blue. It will be available from February/March in Sportmax stores, all Max Mara flagship stores and in main department stores with dedicated exhibition spaces. 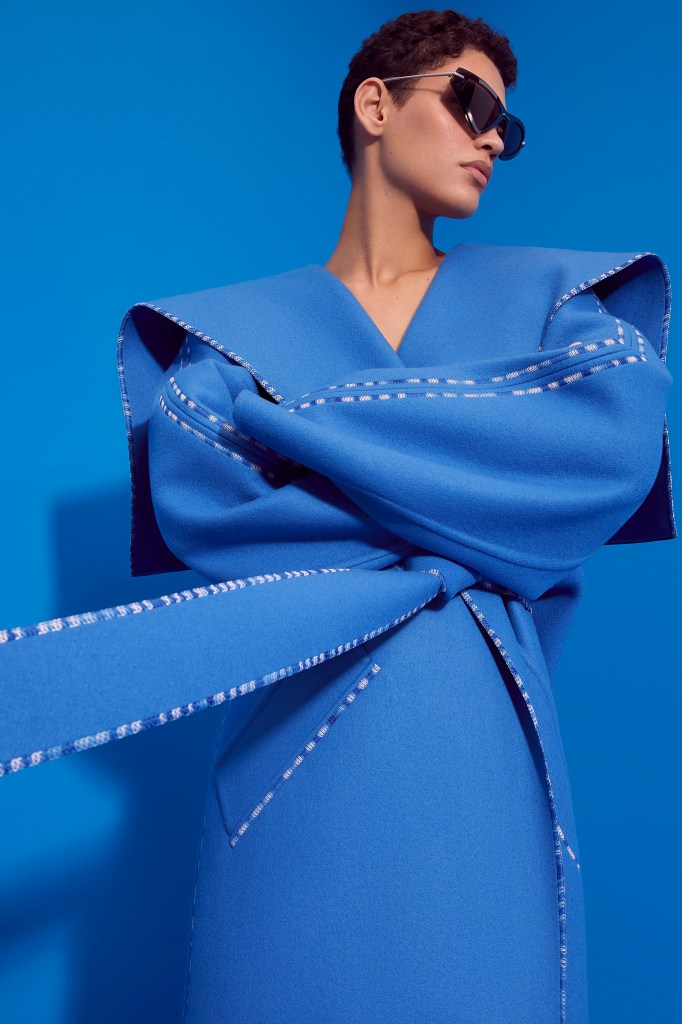 A look from the capsule collection.  courtesy image

Ahead of his times, Achille Maramotti decided to give the creative management of Sportmax not to a designer but to Lison Bonfils, a former model and fashion editor of the French edition of Elle, who understood the changes taking place in society. Over the years, Sportmax has collaborated with designers ranging from Nanni Strada and Jean-Charles de Castelbajac to Odile Lançon and Guy Paulin. “This is an avant-garde brand that has always been focused on trends, and that needed to exist beyond the name of the designer,” Prezioso Maramotti said. “The idea is that the brand is not born and does not die with one person. Each designer had its own style but the message is shared and is the same.”

In the founder’s view, Max Mara was more about fashion to “give women the certainty of always feeling at ease anytime, saying yes to a precise question: does it suit me?” he said in 1971. Sportmax, on the other hand, catered to clothes worn by “women who want to be fashionable.”

The first Sportmax runway show was held on March 18, 1976, at the Hotel Principe di Savoia in Milan. Max Mara, on the other hand, took to the catwalks only beginning in 1983.

The Eighties were a decade of significant changes, coinciding with the entry of a new generation of Maramottis in the company: Luigi Maramotti took over from his father Achille, along with his brother Ignazio and sister Maria Ludovica.

In 1983, Laura Lusuardi, who holds the role of Max Mara fashion director, handed over the Sportmax baton to Grazia Malagoli, who remains the brand’s fashion director today.

Sportmax expanded internationally through the Nineties and Aughts. Today the central focus remains on material and stylistic research. Tailored dresses are core to the brand, as are outerwear, trench coats, leather garments and knitwear. The biker, first designed in collaboration with de Castelbajac; pleats; knits; graphic patterns and colors, and a sporty attitude are among some of the key themes.

Several major photographers were in charge of the Sportmax campaigns over the years, in addition to the above mentioned Moon and Lindbergh, ranging from Hans Feurer and Albert Watson to Marc Hom, Dusan Reljin, Inez van Lamsweerde and Vinoodh Matadin, Mert & Marcus, Craig McDean, Roe Ethridge, and Sims, who for several seasons created powerful images with models including Karlie Kloss, Siri Tollerød and Sigrid Agren. More recently, the campaigns were photographed by Harley Weir, Jamie Hawkesworth and Sam Rock.

Sportmax today is available in more than 70 markets worldwide. There are 17 Sportmax flagships, 16 corners in top department stores, 350 multibrand stores around the world, as well as a strong presence in Max Mara flagship stores.

The company is revamping the Paris flagship, which will be ready next year.