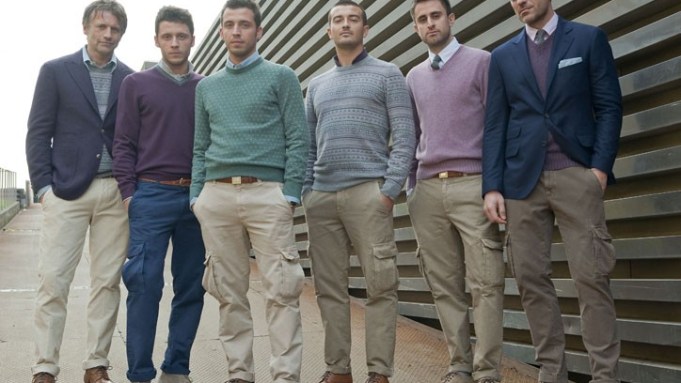 When even Corneliani, a stalwart of traditionally refined clothing, used its moment as Pitti’s featured guest to showcase sportswear, it mirrored the seismic shift that has formed the basis of the Florentine trade fair’s reinvention. The most oft-repeated observation within the walls of the Fortezza da Bassa was how crowded it was.

“No question: It seems a lot busier, and there’s a different energy,” said Lanita Layton, Holt Renfrew’s vice president and general merchandise manager for men’s. “People are smiling and happy and looking forward to the future more. Our spring sell-throughs are already way ahead of last year, so we’re going in with a boost of confidence.” While Holt Renfrew is budget-conscious in tailored clothing, it is buying more aggressively in luxe sportswear, particularly outdoorsy knitwear.

Brunello Cucinelli, with roots in cashmere knitwear, had a big role in the blurring boundaries between chic sportswear and tailored clothing.

“We are finding ways to get men to wear suits again,” Cucinelli said. The Umbria-based brand, which opens a Madison Avenue flagship Jan. 21, ridded jackets of their strict confines with a lineup of ultrasoft sports jackets to be worn with sweaterlike ease. The brand’s dusty spring palette was darkened for fall to aubergine and forest green.

“Sportif chic, which can be worn on a man of all ages without looking out of place,” said Cucinelli of the collection.

Naples-based Isaia took inspiration from swanky Italian ski resort Cortina in the Fifties and Sixties, when the demand for more comfortable men’s garments was at its peak.

“We strongly believe in sports jackets,” said owner Gianluca Isaia while showing off a down-lined nylon jacket — a blazer-outerwear hybrid.

A popular version of the casual blazer was knitted, as seen at London-based Hackett.

“We’re trying to make the jacket more of a fun piece,” said creative director Michael Sondag, referring to Hackett blazers in travel-friendly fabrics, with whimsical linings and in a wider range of colors.

As the context for blazers shifted from the board room to the dorm room and locker room, European sportswear brands have wholly embraced the American touchstones of the Ivy League and the Kennedys.

“The Italians are really catching on to heritage America,” said Chris Olberding, vice president of Gitman Bros., an American maker of button-front sport shirts including some made from archived fabrics. “We’re opening more and more European accounts.” Gitman finished 2009 up 20 percent, the top performer in the brand portfolio of Individualized Apparel Group.

“There’s clearly two distinct things going on from a trend perspective: What the Japanese like Haversack are doing with the vintage American worker idea, and the new Ivy League,” said Saks Fifth Avenue vice president and men’s fashion director Eric Jennings. “I see that over and over here. I think Gant is doing it best. Henry Cotton’s and Woolrich look great too. In Europe, they get very logo-heavy in the Ivy League look, but we’re staying away from that.”

Everlast is celebrating its centennial with vintage-looking fleece and jersey boasting verbal references to New York City and the Bowery. It is also launching a licensed Muhammad Ali collection for fall, 50 years after Ali’s gold medal at the 1960 Olympics.

“Buyers are back with a good budget. We are on par with last year, perhaps a slight increase,” said Hirofumi Kurino, senior adviser and creative adviser for Japan’s United Arrows Ltd., “Overall the atmosphere is one of relaxed elegance, a mixture between tailored clothing and military influences which are finding new common ground in the middle for a nonchalant attitude.”

He particularly liked Roberto Collina for chunky knits as well as rising star Umit Benan and Camo, which added an avant-garde element to the show.

The departure of some heavyweight exhibitors in recent years has opened the way for many smaller and lesser-known vendors, a development applauded by retailers looking to differentiate their offerings.

“I’ve been coming here since 1981, and it seems like Pitti is returning to its roots,” said Tom Kalendarian, Barneys New York executive vice president and general merchandise manager of men’s. “This marketplace is a unique opportunity to find these artisanal products that a luxury customer easily understands and values. There’s a strong tendency to hand tailoring, hand stitching and hand looming.”

On that note, for fall, Incotex Red will boast a limited edition of trousers with nine street-inspired, hand-painted motifs. And its parent company, Slowear, intends to create partnerships with under-the-radar Made in Italy labels — especially for accessories and shoes — to showcase under the “Selected by Slowear” banner in Slowear stores.

“It’s not easy to have credibility in vintage products,” said Griariotto, adding Slowear invested “considerably” in research and development of fabrics and washing techniques.

Driven by its focus on specialized outerwear, Allegri said it saw double-digit sales increases in fiscal 2009, according to president Gian Maria Argentini. For fall Allegri ventured into new terrain with a line of bags.

Want Les Essentiels de la Vie, a maker of structured bags and small leather goods favored by fashion insiders, is offering its lowest priced bags ever. A zip-top canvas tote retails for $195 or $145, depending on the size, and another canvas style that comes with two sets of leather handles is $195.