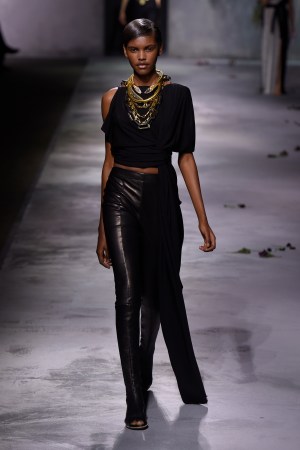 Fashion shows can be the ultimate launchpad for new faces. Though not typically where models make their money — marquee names, however, have been known to fetch up to $200,000 for a single runway walk — fashion week exposure often leads to lucrative campaigns and contracts.

This story first appeared in the September 9, 2015 issue of WWD. Subscribe Today.

Take Maartje Verhoef: The Women-repped Netherlands native walked 66 shows during the spring 2015 collections, the most of any model that season. She went on to land campaigns for Prada, Louis Vuitton and Calvin Klein, as well as back-to-back editorials in Vogue. Last season, it was neck-and-neck between DNA’s Waleska Gorczevski, who walked 75 shows, and Society’s Alexandra Ljadov, who nabbed 74. Since then, Gorczevski has done editorials in i-D, Vogue Japan and British Vogue, while Ljadov has scored campaigns for Gucci, Saint Laurent, McQ and Jil Sander.

Amilna Estevao, SOCIETY
Angola
After making her debut at Alexander Wang, Estevao made a strong showing at Prada, Fendi, Balenciaga and Stella McCartney and has since been in W and Vogue Paris.

Taylor Hill, IMG
United States
Hill’s striking looks give her the ability to do both commercial — she’s featured in Victoria’s Secret and Juicy Couture campaigns — and high-fashion, having walked in Chanel, Alexander McQueen and Givenchy last season.

Annika Krijt, SOCIETY
The Netherlands
Krijt — known for her strong features, including an unmistakable pout — is a See by Chloé campaign regular and a rising editorial face, featured in two spreads in the September issue of Vogue Japan.

Mae Lapres, MARILYN
France
The half-Chinese Lapres has been modeling for a few years, but last fall, designers seemed to take notice. Lapres walked for Gucci, Marc Jacobs, Rodarte and Louis Vuitton, where she seems to be a recurring favorite.

Anna Cleveland, NEXT
The Netherlands
The daughter of model Pat Cleveland — the duo appeared in Lanvin’s spring 2015 campaign together — is making a name for herself by bringing performance and personality back to the runway.

Isabella Emmack, DNA
United States
A cropped black pixie cut lends Emmack — who has Colombian, Spanish and German roots — an androgynous appeal that should be more far-reaching now that she’s no longer an Alexander Wang exclusive.

Lineisy Montero, NEXT
Dominican Republic
Montero’s natural beauty cemented her status as one to watch on Prada’s runway — where she was an exclusive and featured in the fall campaign — as well as those of Céline, Balenciaga and Louis Vuitton last season.