The fashion brand has hired investment bank Rothschild to look for suitors, WWD has learned. 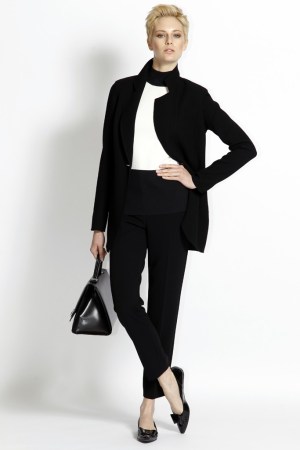 St. John is looking for a new home.

The Irvine, Calif.-based fashion brand, which has been majority owned by Vestar Capital Partners since 1999, has hired investment bank Rothschild to look for suitors, WWD has learned.

Known for its fiercely loyal following, the brand is positioned at the opening price point of the designer market and is no doubt trying to catch some of the fire ignited by Michael Kors Holdings Ltd.’s initial public offering in December. The Kors stock sale, which has given the company a current market capitalization of about $7.7 billion, has designer companies of all stripes pondering their own valuations.

Vestar, which declined to comment Wednesday, has already held St. John much longer than the five to seven years that is typical for a private equity firm. The search for a buyer has been going on for six to eight weeks, sources said. Rothschild also declined to comment.

The Gray family, which founded the brand in 1962, sold Vestar a controlling interest for $520 million and retained a minority stake for itself.

The company’s earnings before interest, taxes, amortization and depreciation — a key metric when valuing a firm for a buyout — are said to be stable. St. John is understood to have about $400 million in annual revenues, wholesaling to Saks Fifth Avenue, Nordstrom and Neiman Marcus, and operating about 26 of its own freestanding stores. International sales represent about 20 percent of the firm’s revenues, with further opportunities seen in Asia, Europe, Russia and the Middle East.

“We’re in the process of turning the business around,” said chief executive officer Glenn McMahon last year. “This is a very significant business, and it’s been a very methodical turnaround. This is an evolution and a transformation of the brand that we began in earnest four years ago, when I joined the company. We’re pleased with the progress we’re making.”

Ralph Toledano was named chairman of St. John in August, a position he continued to hold after becoming president of Puig’s fashion division.

In 2006, the company, under then-ceo Richard Cohen, famously tried to update its image too fast, signing a multimillion-dollar deal with Angelina Jolie, causing outrage among many steadfast customers.

The brand is a favorite of the power set in Washington, where its professional styling and domestic production are not apt to stir political problems.

Robert E. Gray, who started the firm 50 years ago with his wife, Marie, died in February at 86. He was chairman and ceo of the company until 2002. His wife and their daughter Kelly, who at one time was the face of the brand, pulled back from the company’s day-to-day activities in 2007. They now act as marketing and design consultants.

Should St. John find a buyer, it would be the latest fashion brand to benefit from the boom in M&A activity this year. The deal market has been hopping despite the glacial pace of the U.S. economic recovery, slower growth in China and acute political and economic troubles in Europe.

Just over the past few weeks, Richard Perry’s Perry Capital converted its debt into equity and took over Barneys New York; The Talbots Inc. began negotiations with private equity firm Sycamore Partners; Frederick’s of Hollywood Group Inc. hung out the “For Sale” sign; Ascena Retail Group Inc. agreed to acquire Charming Shoppes Inc., and Collective Brands Inc. reached a $2 billion deal to split up and sell its operations. These deals came on top of IPOs for Tumi Holdings Inc. in New York and Brunello Cucinelli SpA in Milan.