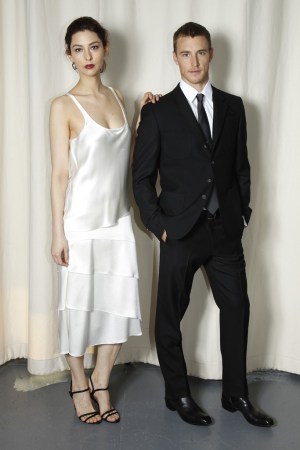 NEW YORK — A deep burgundy color plays a key role at Carr, a new brand launching this fall. The hue is inspired by a vintage Chevrolet once driven by the mother of George Carr, who founded the label with industry veteran Edward Jones III.

Family is an important theme behind this designer line. At its core is a large collection of fashion sketches from Zack Carr, George’s late brother, who was best known for having served as Calvin Klein’s creative director and right hand for nearly three decades. He died from a rare form of blood cancer in late 2000. “While he was living with this paralyzing cancer he just sketched his heart out,” George Carr said. “There are thousands of these sketches.”

Carr carefully preserved the 50 Hermès croqui books his brother used for his illustrations. He was trying to decide how to honor Zack’s design legacy, when his friend Ken Petti had the “aha” moment. “He looked at me and said, ‘George, give it up. Give up the exhibit, give up the charity events. You have a brand. Call it Carr.’” With that, he contacted Jones, who he knew from their own days at Calvin Klein, where both worked in sales and marketing in the Seventies, and presented his concept: a women’s and men’s collection based on the sketches, in addition to Carr family memorabilia and samples from the Zack Carr collection, which the late designer operated for four years in the Eighties. Jones immediately bought into the idea and they joined forces, with Carr serving as director and Jones as chairman. They tapped Scott Formby, an alum of Geoffrey Beene, J. Crew and Lucky Jeans, as designer.

Through fall 2013, the women’s launch lineup will be carried exclusively at Bloomingdale’s, and the men’s exclusively at Saks Fifth Avenue. Divided into four groups (collection, sport, denim and accessories), the aesthetic is modern and clean with slight architectural touches — not surprising, given the Carrs’ Calvin Klein background.

For men, looks include slim-fitting three-button suits, a black leather blazer with exterior pockets and narrow jeans. For women, there’s a black collarless leather jacket, a sleek slip dress, a burgundy leather shell top with matching skirt and several more romantic looks, such as a printed bias-cut dress. Accessories include custom-made boots in collaboration with Lucchese and silver belt buckles with Clint Orms.

Each season, one of Zack Carr’s 50 sketch books will serve as a loose inspiration for the new Carr collection. “I think there’s an authenticity of design coming from Zack that is the foundation, which is really important, but we don’t have to live on that,” Jones said. Added Carr: “I believe our Carr team has completely translated the line as Zack would have wanted it — not for then but for now.”

As of press time, the Bloomingdale’s doors to carry the women’s merchandise was yet to be finalized, but it will be carried in New York’s 59th Street flagship on the fourth floor, next to Giorgio Armani and Chanel. Stephanie Solomon, vice president of fashion direction at Bloomingdale’s, cited various elements that make Carr appealing. “The quality, the fit, the fact that it was well thought-out and the details are remarkable, and not overdesigned,” she said. “It brings a sense of elegance and definitely a design point of view for a woman who is very chic. It’s not over the top, but just beautiful clothes, and there is really a void in the market for the simplicity of these designs.”

The men’s, meanwhile, will initially be carried by six Saks stores, including the Manhattan flagship’s seventh floor.

“We developed a beautiful product and didn’t want to initially concentrate on selling lots of doors,” said Jones, declining to discuss sales projections. “We wanted it to be something special, which is where we ended up.”