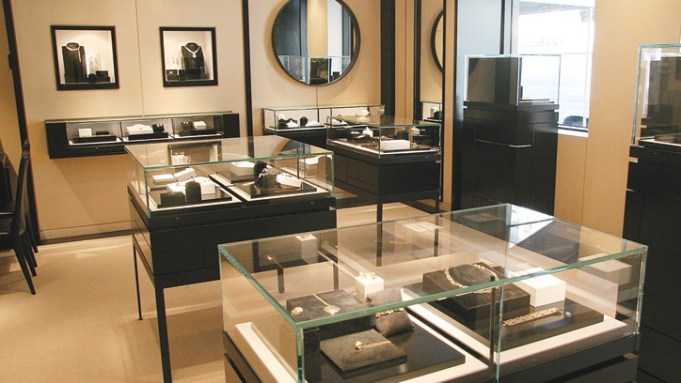 Millions of moviegoers have seen Stefano Canturi’s work, but they don’t know it.

The Australian designer made an elaborate necklace worn by Nicole Kidman in Baz Luhrmann’s 2001 film “Moulin Rouge.” More recently, Canturi worked with Luhrmann to create jewelry for Kidman in the 2008 movie “Australia.”

Now, Canturi, 43, is preparing for his own close-up. The designer, who has worked for 23 years in his native Australia, opened his first Manhattan boutique last month at 42 East 66th Street, near Madison Avenue. The 700-square-foot shop echoes the hallmarks of Canturi with its linear, geometric bird’s-eye maple paneling, diamond baguette-inspired cases and streamlined look.

Canturi’s fine jewelry is known for its intricate work with baguettes, which the designer sets in a grid or quiltlike arrangement in gold for a look that is both Art Deco and cubist in feel.

“Big diamonds aren’t really my thing,” he said. “I like pieces that show character.”

Key looks include an updated diamond line bracelet hinged on baguettes and collars that are flexible.

The Manhattan shop has entry price point pieces, such as a gold pendant for $1,300, and one-of-a-kind high jewelry-inspired pieces such a diamond pendant earring inset with large emerald cabochons. The average price is $4,000. Canturi is also keen on using black Australian sapphires. Lower in price than black diamonds or blue sapphires, black sapphires sparkle and seem more precious than the price would suggest.

“The days of spending a million dollars on a ring are over,” said Canturi, who pointed out a diamond and black sapphire ring he retails for $15,000 that another jeweler might sell for $150,000 in a traditional blue sapphire. “People aren’t looking to overspend.”

Robert A. Donofrio, president of Canturi and former chief executive officer of Asprey USA, said the positioning of the store off Madison Avenue was purposeful.

“It’s the thing to be discovered,” Donofrio said. “I think the timing is perfect, when the little guy can put out his jewelry and people will look because everybody is not doing something new.”

The Manhattan boutique is expected to do $2.5 million in retail sales within 12 months. Donofrio said there are plans to open as many as four more stores in the U.S., including locations in Chicago and Houston. The brand also launched this year in Las Vegas. In Australia, Canturi has boutiques in Melbourne, Sydney and Brisbane.