The brand is unveiling its spring couture collection at its new Rodeo Drive store and publicly introducing its new creative director. 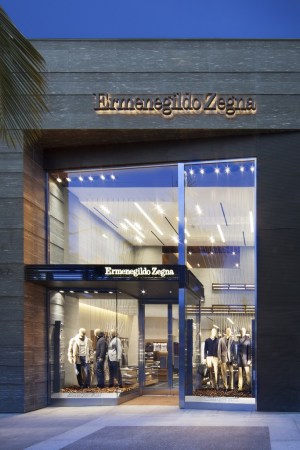 Ermenegildo Zegna is showing its commitment to the North American market by unveiling its spring couture collection at its new Rodeo Drive, Beverly Hills, store tonight that will also serve as the public introduction of creative director Stefano Pilati.

This is the first such event for Pilati since he joined the company in January. There will also be a preview of a special selection of 10 one-of-a-kind Couture looks available only in Beverly Hills. Wool and mohair suit separates, wool gabardine jackets, floral jacquard knits and “after-six” looks, among others of these items, will remain in-store and be available for purchase throughout the full spring season.

In an interview ahead of his trip, Zegna said, “The U.S. is among those markets that are faring better — better than Europe — despite a slowdown in October. We remain positive and expect to close the year with single-digit growth in the U.S.” The executive said Los Angeles is “the most important market after New York,” thanks to ever-increasing local shopping as well as tourists from Asia. North America accounts for 20 percent of group sales, and Zegna expects that number to grow in 2014. He revealed plans to open a new store at Brookfield Place in New York in 2015.

Discussing business around the world, Zegna characterized the year as “less brilliant than 2012,” and predicted 2014 will “not be an easy year.” He said currency fluctuations and exchange rates “don’t help. I remain positive, but there are independent variables that are outside our control. Yet we are determined and will proceed with our investments.” The new Personalization Project — for made-to-order clothing and accessories — will be available at the Los Angeles flagship, one of only three units in the U.S. to provide this service, together with the New York and newly renovated Chicago stores. “Our customers ask us for personalization, they want to be different and to be able to make individual choices, depending on their needs. We see this in all aspects of life, from cars and traveling to lodging, restaurants and art. We even start from a personalized fabric, with initials,” said Zegna. “The price can be an issue at a general level, but it is less so if you offer added value, if there is special attention paid to the individual.”

Pilati concurred. Asked for the reasons for an increasing request for personalization, the designer said “a certain kind of man dresses his own personality before his body.”

Both Zegna and Pilati were upbeat about their working relationship. “Pilati has ambitious projects and we believe in them,” said Zegna. Pilati said the rapport with the company and with Gildo Zegna has evolved “in a constructive way. Honesty and listening are fundamental elements.”

Tonight’s event will also serve to unveil the company’s new ad campaign, which was conceived by Pilati, who will appear in a video that is part of a multimedia experience that introduces “éminences grises,” powerful behind-the-scenes personalities.

Lensed by photographers Inez van Lamsweerde and Vinoodh Matadin, the ads will break in January in select print and digital media worldwide.

Northern Irish actor Jamie Dornan was selected for the ads along with young Italian model Paolo Anchisi. The idea is a narrative between the two characters in a sequence of portraits and product stills.

“Jamie was our face of choice, not only because he is an accomplished actor, but also an unconventional model with a strong personal sense of style and substance. He has made understatement the key to his success,” said Pilati of Dornan, who has just been tapped to play the role of Christian Grey in the movie version of “Fifty Shades of Grey.”

In Los Angeles, Zegna is relocating 18 years after the opening of the previous location, in a space designed by Peter Marino — his 16th concept store for the brand to open globally. It covers more than 5,800 square feet over three floors and offers all product categories, ranging from formalwear and sportswear to accessories and fragrances, including the Zegna Sport collection.

Pilati pointed to Marino’s “ability to transfer in substance the thoughts that surround him or that are entrusted to him.”

A key inspiration for the store design is a fabric created at Zegna’s namesake wool mill in Trivero, Italy, for more than 100 years. Within the double-height storefront windows, metallic strands echo the fabric’s warp and weft yarns.

In keeping with the Italian heritage of the brand, the Beverly Hills unit houses modernist furnishings such as a pair of lounge chairs designed by Milo Baughman, a set of Artona armchairs by Afra and Tobia Scarpa, and a Gio Ponti sofa. Specially commissioned artwork includes Mimmo Jodice’s photograph of Villa Zegna and Emil Lukas’ Zegna silk thread painting “Zegna Silk Hum” displayed above the stone fireplace in the Couture room. With a nod to the Southern California lifestyle, three works of art depicting surfboards by Peter Dayton hang along the staircase.

There is also a VIP room, featuring silk carpeting and golden stucco walls. On the third level stands a 600-square-foot terrace with custom furniture that overlooks Rodeo Drive.