By Jessica Iredale on May 6, 2009
View Slideshow 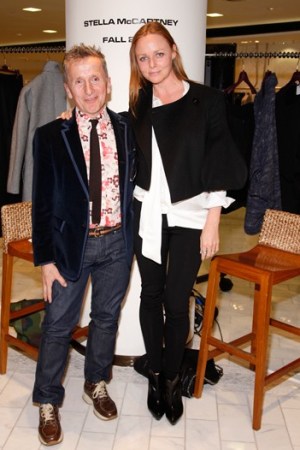 There are two big questions the day after the Metropolitan Museum of Art’s Costume Institute gala: Who looked good? Who looked bad?

Both are typically directed toward the designers’ dates. But it was the lace catsuit Stella McCartney wore that commanded the conversation Tuesday afternoon on the sixth floor of the Barneys New York flagship on Madison Avenue, where she stopped by for a fall 2009 trunk show and Q&A with Barneys creative director Simon Doonan.

“She looked so fierce,” Doonan said of McCartney’s choice — a preview of what’s to come for spring — before she made her entrance. “I’m dying to know where she got her passion for the jumpsuit. Is it like a Pussy Galore situation?”

The talk-show-style session that followed added a quirky and entertaining twist to the typical trunk show format, which, as Doonan pointed out, not every designer would be up to. “Some designers are quite monosyllabic,” he said. “But Stella’s a spirited girl with a fabulous sense of humor.”

She flaunted her wit, fielding questions, which ranged from silly — “How do you get in the creative spirit?” Answer: “Vodka and tonic.” — to serious. On the subject of McCartney’s ecological and ethical initiatives, which landed her on the Time 100 list of the world’s most influential people, McCartney was informative but modest. “We’re not perfect, but any effort is better than nothing,” she said.

As for the recent accolades, McCartney, who also was honored by the Natural Resources Defense Council last month, said jokingly, “I seem to be really cooking with gas.” That followed with a sincere, “But the Time 100 is the biggest thing. I’m half American so I’m really proud. I still can’t believe it.”

Of course, after all the banter, the point of this exercise was shopping. Sales figures were not disclosed, but a black boyfriend jacket from fall and an intarsia jumpsuit from pre-fall were among the popular items. Prices ranged from $500 to $2,500.

Julie Gilhart, Barneys senior vice president and fashion director, stressed the importance of designer-customer relationships, particularly in the weakened economy and with ecologically sensitive product. “Customers get so much out of [meeting the designers],” Gilhart said. “I like wearing things from people I know, knowing where the clothes came from and how they were made. It raises the bar.”

And for her part, McCartney was happy to engage with the clients, whether that meant taking photos, talking to one woman’s son on a cell phone, or dispensing advice on a custom-made wedding dress. “I love the spirit here,” McCartney said. “I really like meeting the customers and just people. Even if they’re not my customers, but just girls who want to be fashion designers, honestly, I enjoy it.”

And she has the chance to prove it again today in Chicago, where she’ll be for another Barneys trunk show.