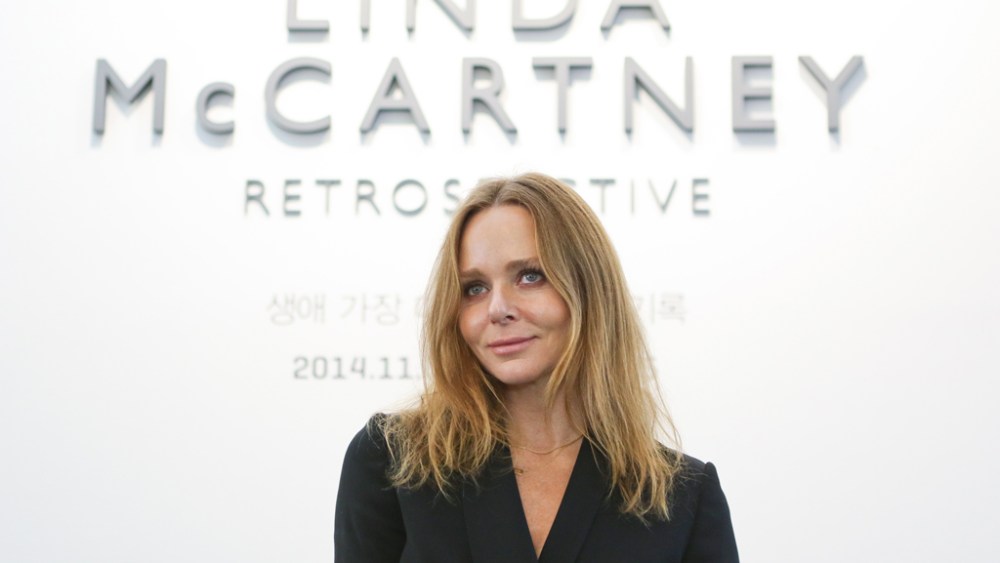 SEOUL – It’s no surprise that for the younger generations in a nation as fashion-forward and trendy as South Korea, the name McCartney is more synonymous with contemporary fashion than it is with the musical legacy of The Beatles. Within the local fashion community, British designer Stella McCartney is best known for her eco-conscious and minimalistic yet feminine design aesthetic.

On Wednesday during her first visit to the nation, McCartney made a whirlwind impression on Seoul, attending a series of events throughout her one-day tour of South Korea. In addition to holding a creative forum at a local museum, McCartney attended the Adidas by Stella McCartney 10th Anniversary Showcase, as well as a Stella McCartney cocktail event at multibrand luxury retailers Boontheshop.

McCartney remarked on the diversity of the local fashion scene during an interview. “From what I’ve seen, I have to say [Korean fashion is] pretty cool, pretty individual,” she said. “People are wearing an honest expression of what they are…they seem to all have a nice, eclectic mix of looks.”

She explained that the Korean market is a growing focal point for her brand. “We have a lot of people who are understanding and warming to what we are doing. It’s not like we’re struggling [to explain our brand], it seems to come naturally, which is great — so that means we’re doing something right,” she said about local consumers, adding that her denim collection and children’s wear have been well received in Korea.

When asked about the controversial topic of the dog meat industry in South Korea, McCartney, a noted animal rights activist, spoke out against the consumption of all animals. “I just think that meat in general, I look at it all in the same way….There are so many animals that are getting killed for their meat and I think it’s all wrong,” she said.

The power lies with consumers, she said. “I think it’s more about being mindful of what you eat. People can make any meat, and if the consumer doesn’t buy it, then they have no market or demand….Be aware of what you’re eating and the impact on what it has on the planet.”

Early in the afternoon, McCartney visited Daelim Museum to hold a forum discussion on her work and legacy. At the talk, the audience was given the opportunity to ask the designer everything from career advice to her philosophy on ethical and sustainable living.

“I think when I first started, I was [known for being] the daughter of Paul McCartney. Some people judged that negatively, but some also [judged me] positively…I wanted to prove that it doesn’t matter who your parents are – you can still succeed,” she said.

“I don’t know if I’d be a fashion designer if I was just designing pretty things…for me what keeps me going is [doing] what challenges me…” she explained through a translator to a full house of students and aspiring young creatives. “I think it’s challenging to not only create a product in a visual and artistic way, but also to create something in a mindful way. The two, I think, have to go hand in hand. ”

The designer also gave out fashion advice, and explained that she doesn’t always play by the fashion rulebook. She said the hardest question is when someone asks her what her favorite piece or collection is amongst her works. “I’m not a trend person, I love mixing things [up] with other [items] I created five years ago.”

The talk was held in conjunction with “The Linda McCartney Retrospective” at Daelim Museum, an ongoing exhibition of McCartney’s late mother’s photography. The retrospective, which has hosted more than 310,000 people over the past six months, showcases scenes from McCartney’s picturesque childhood growing up on the family farm, the McCartney’s family holidays, as well as the more glamorous side of her mother’s work, photographing rock icons such as Mick Jagger.

In the afternoon, McCartney went on to hold a meet-and-greet and celebrate the Adidas by Stella McCartney 10th Anniversary Showcase, at the Adidas Women flagship in Cheongdam, Seoul’s trendy luxury district. Korean actress Bae Doona, best known for starring in “Cloud Atlas” and “The Host,” joined McCartney on the red carpet. The shop, specially redesigned in bright minimal colors for the occasion, featured aerobic performances by dancers.

Later in the evening, a large crowd of fans and fashionistas armed with iPhones waited for McCartney’s entrance at the cocktail event  held at Boontheshop. The soiree, which began with a slight delay, was soon overflowing with a host of Korean celebrities including actress Kim Hee-sun, Choi Su-Yeong of K-Pop group Girls Generation, singer BoA and others. The event also featured a collection of gowns McCartney designed for previous Met galas.

This is McCartney’s third tour through Asia over the last few years – she made similar multistop trips in 2014 and 2013.

On Tuesday, McCartney hosted an indoor garden party to celebrate the recent opening of her store in Beijing upmarket Shin Kong Place. Guests wandered around an “Alice in Wonderland”-inspired set, complete with a faux privet maze, as models wearing the designer’s 2015 winter collection played oversize chess and croquet.

“This part of the world has responded really positively to us and that has really encouraged me to come back,” she said between signing bags and shoes, and posing for selfies with Chinese fans.

The Shin Kong Place store, which opened in October, is one of five stores the brand has in China.

In recent years, Chinese consumers have moved away from mainstream luxury brands and embraced quirkier, niche brands. At the same time, interest in sustainable lifestyles and vegetarianism has also risen as China’s air quality and food safety have worsened. McCartney said she was “impressed” by many of the environmental questions she heard Chinese people asking and was encouraged that her new range of leather free-shoes was doing well here.

In recent months, her Web site has added the Mainland as a shipping destination so Chinese shoppers can buy online.

On Thursday night, the designer will touch down in Tokyo for a few hours to fete her new flagship — her Aoyama boutique recently moved to a more prominent spot next door to Miu Miu and across the street from the Prada flagship. The boutique is one of McCartney’s latest shops to feature a clean, natural aesthetic to give the space an airy and simplistic feel.

The opening event will highlight McCartney’s involvement in the White Ribbon campaign, an organization that raises awareness of the prevention of violence against women. The exterior of the shop will be wrapped in white balloons attached together in the form of a ribbon.

The event will also feature performances by Wadaiko drummers, as well as a traditional Kagami-wari opening ceremony. Local celebrities including Rila Fukushima, Rola and Mademoiselle Yulia are expected to attend the launch.