The designer discusses the difficulties of being "green" and vegetarian in fashion. 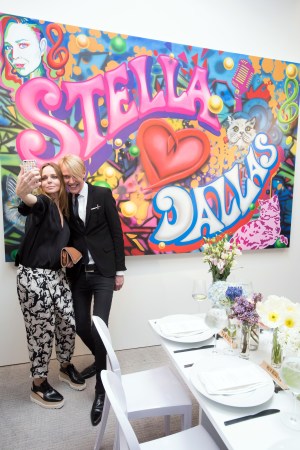 DALLAS — Jim Gold, president of Neiman Marcus, sang Stella McCartney’s praises with unusual passion Wednesday when the designer visited the NorthPark Center store for the first time in a decade.

“Her accessories business has no leather, which is pretty remarkable,” Gold pointed out to 30 guests seated for an exclusive luncheon. “It’s the only large brand in the world that can claim that, and we built a very large business with handbags and shoes and no leather, and that is just incredible. If you had told me that would be possible, like most people at the time I said, well, that’s not a good idea.”

To the apparent surprise of the designer, he detailed her entire design career from age 10, explaining that her brand is sold in 77 countries and does “hundreds of millions” in sales.

“So lunch is on me!” McCartney interjected. “Have whatever you want.”

“In spite of all of her success she’s the nicest, most humble, kind person you will ever meet,” Gold concluded. “We deal with all the designers and I’ll tell you, she’s in a league of her own.”

The vegan meal was served amid a gallery of large-scale photos that Neiman’s had commissioned at McCartney’s pre-fall show in January at Amoeba Music in Los Angeles. The room also featured a Stella-themed graffiti painting to celebrate her visit, which happened to coincide with Dallas Arts Week.

“I love her shoes — they’re so comfortable,” said Brittingham, sporting McCartney’s rubber-soled platforms. “I have, like, three pairs.”

Made of faux leather, sustainable wood and biodegradable rubber, the shoes represent a microcosm of McCartney’s sourcing strategies. In fact, her greatest inspiration lies in developing cruelty-free, sustainable and eco-friendly materials for her luxury goods, the designer said later that afternoon in an interview.

“I work more like a young tech company,” she reflected. “I get really inspired by new approaches, new materials, new sourcing, new technology. I’m more excited about working with a print technique that doesn’t involve using water or an upper on my shoes that I can weave so there’s zero waste. That makes me feel modern.”

McCartney’s evangelizing about eco-conscious production at an industry seminar last year in London piqued the interest of Vivienne Westwood. “At the end they opened it up to questions, and my biggest fear was Vivienne putting her hand up — ‘oh my God, Vivienne Westwood, an icon, a British woman, oh please not you Vivienne,’ and she was the only one,” McCartney recalled. “She asked me some really challenging questions, which I had absolute responses for, thank God, and at the end she was like, ‘I wish you would share all of this information. This is great.’ I said come to my studio this week and I’ll share with you, and she did.”

The approach is considerably more demanding and variable than conventional production.

“It’s like a mine field,” McCartney said. “Each season it’s like this little bomb exploded over there and now we can’t get that [material] because it rained too much in that part of the world. It’s the way I want to work. I want to be challenged and I want to do something that’s responsible and mindful and I don’t want to do it the way everyone else does.”

Even though consumers are increasingly conscious of how their food and energy are sourced, McCartney thinks that only vegans and vegetarians consciously seek green fashions.

“At the end of the day I’m a fashion designer, and my job is to make a pair of shoes that you want to buy no matter what it’s made of,” she said. “If I made hemp handbags that looked like crap, it’s just as unsustainable as making a ton of product that nobody wants to keep and becomes landfill. I’m designing beautiful things that people want to bring into their lives and it just happens not to have dead animal in it.”

But barring animal skins in her products has the greatest environmental effect, she pointed out.

“We sell ready-to-wear, which is shocking because all the big houses really only sell the leather handbags and shoes,” she asserted. “Even though I do everything else it doesn’t touch the fact that we don’t cut down trees to make room for cows to be made into bags.”

As much as she loves technology, McCartney views social media as a marketing tool that is here “whether you like it or not.” Describing herself as “a very private person,” the designer said she doesn’t visit social media for personal purposes or to scan others’ feeds.

“I think it’s here to stay so it’s something to embrace,” she said, noting she’s most involved in Instagram. “I take pictures and send them to my guys, but we don’t use it in an aggressive and manipulative way. I think that a lot of fashion houses and big corporations target people, and we don’t entertain that side of it. I feel I’m a consumer in life, too, and I don’t want to be targeted. We use it in a way that complements what we do and enhances what we say. We have a lot of products and charitable causes and a lot of things we want to express, and we can do that through those platforms.”

McCartney, who opened her boutique in Houston on Tuesday, had a packed schedule in Dallas that included client fittings and a sprawling kids’ carnival outside the Stella McCartney store at Highland Park Village. Then it was on to Los Angeles for a private shopping event benefiting H.E.A.R.T., which assists victimized children.

“I feel like everyone has their own individual style and my ladies, I hope, wear my clothes in a way that is sort of true to them and honest to them,” she reflected. “The ones who are drawn to it, it’s for a reason.”