The designer is on a mission to boost her brand’s profile in Japan and China, where it’s seeing double-digit sales growth, and get to know the region better.

By Amanda Kaiser and Casey Hall on May 23, 2013
View Slideshow 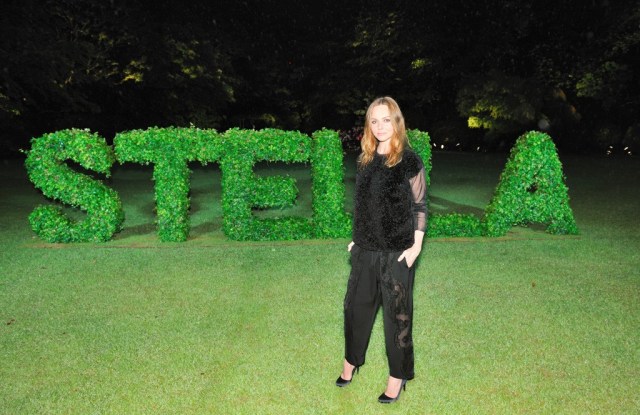 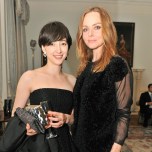 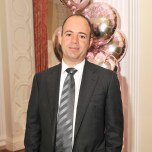 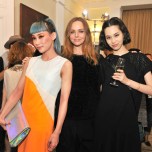 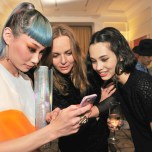 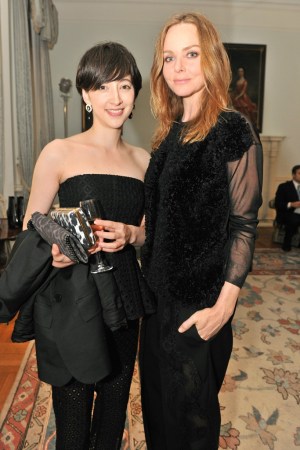 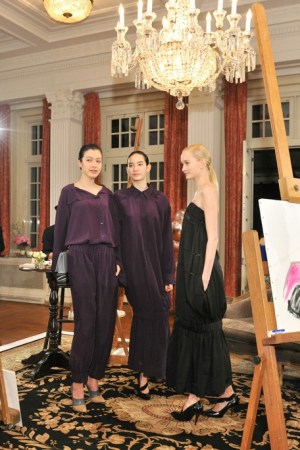 The scene at the Stella McCartney presentation in Tokyo. 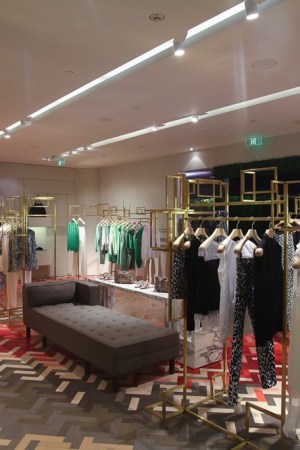 A view of the Stella McCartney store in Beijing. 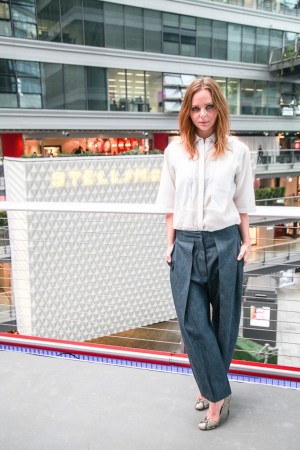 TOKYO — A freshly minted Order of the British Empire in her possession, it seems only fitting that Stella McCartney is acting as an ambassador of sorts on her whirlwind four-day trip through Asia, which she kicked off with a party at the British Embassy here on Monday and will wrap up today in Hong Kong with another presentation of her fall collection. McCartney is on a mission to boost her brand’s profile in Japan and China, where it’s seeing double-digit sales growth, and get to know the region better. Between Tokyo and Hong Kong, she made her first trip to Mainland China, where she feted a new flagship in Beijing, hosted a black-tie dinner in Shanghai on Thursday night and spoke to fashion students at Donghua University.

With her name emblazoned across the stage in gold inflatable letters, McCartney greeted the audience at the university with a well-received “ni hao” and spoke to the students about her own fashion education at Central Saint Martins, the challenge of working in a responsible and sustainable way within the fashion industry and work-life balance.

The designer seemed touched by the efforts of students, many of whom posed their questions in halting English.

The evening’s black-tie festivities promised “dinner and a show” in the somewhat more salubrious surroundings of the historic Astor House Hotel, where red lanterns and Art Deco decor were the backdrop to a parade of Shanghai’s most fashionable people.

Rather than a staid runway-style presentation, the “show” was a dance routine choreographed by Blanca Li and featuring some of China’s best-known models kitted out in McCartney’s designs.

“My God, that just there. How many dancers, and all in my clothes. That was just the most amazing thing ever,” the designer enthused as the finale, performed to Daft Punk’s “Around the World,” came to its conclusion.

“I was in Beijing yesterday at my store opening and today in Reel [Department Store] in my store, so I’ve been meeting a lot of my customers. It’s been really great to have that experience, actually.”

That was one of the main purposes of the designer’s trip. “For me on a personal level, I hope to have a greater understanding of this part of the world,” McCartney said a few days earlier after landing in Tokyo and straight off a quick FaceTime chat with her kids back home. “Obviously it’s really great to engage in this part of the world, to have an understanding and to really be kind of experiencing it both as a designer and as a creative person.”

Stella McCartney is investing heavily in Asia, said Frederick Lukoff, president and chief executive officer of the fashion house, which is a 50-50 joint venture between the designer and Paris-based Kering. “It’s very much about Asian momentum now,” Lukoff said.

He declined to give sales figures but said the brand’s business in Japan has been growing at a double-digit pace over the last few years. China, a smaller and younger business for the brand, is “growing fast but from a low base,” the executive said.

This week Stella McCartney opened its first freestanding store in Beijing, and the designer hosted an opening party Tuesday evening. The more-than-3,000-square-foot store makes its home in Parkview Green, a futuristic retail and commercial space that bills itself as one of China’s greenest buildings. The eco-friendly aspect of the development has a particular appeal to the designer, known for her lifelong vegetarianism and refusal to use leather or fur in her collections.

The brand has further store openings in the pipeline for later this year, including a second store in Shanghai, a second boutique in Hong Kong and the label’s first unit in Taipei, Taiwan.

McCartney opened its first store in Mainland China in Shanghai last year, and the brand also has a smattering of wholesale accounts through retailers such as Lane Crawford and IT.

Because the brand still has a small footprint in China, Lukoff said he’s not concerned about an apparent slowdown in the luxury goods market there. “I think [China] is ready for a brand like us. I’m not sure it would have been ready four or five years ago. I think the Chinese consumer is gaining in sophistication at an unbelievable pace and that a brand like ours can succeed in China,” Lukoff said, referencing Chinese consumers’ movement away from logos and splashy status symbols.

While she acknowledged the growing importance of Asian markets to the fashion industry and expressed a desire to learn more about them, McCartney stressed that she is careful not to let regional tastes — or perceptions of them — cloud her creative vision. She said she developed a global view of the world early on as she traveled extensively during her childhood, and that has stayed with her.

“I felt like I had belonged to a planet rather than to a country or an island. And I feel now, with media and communications, it’s more and more that way of thinking. But I think I had always had that kind of perspective. So in starting my house, it’s always been about expressing who I am and what we are and really giving that to everyone in a similar language,” said the designer, clad in a white pantsuit.

McCartney was similarly quick to dismiss any suggestion that her vocal support of animal rights and environmental sustainability might not resonate as much with Asian consumers as much as it does with consumers in Europe and the U.S. “It’s something that resonates with the right kind of mind…if you want to be aware and informed and be a conscious consumer,” she said. “I think that Asia absolutely is thinking that way, more than people give it credit for actually.”

While the China leg of the trip took up three days of the brand’s four-day itinerary through Asia, both McCartney and Lukoff emphasized the importance of the Japanese market. In 2008, the brand opened its first flagship in Japan in Tokyo’s Aoyama district, and in March it opened a second, smaller outpost in the Roppongi Hills shopping mall.

On Monday, the designer made an appearance at the Roppongi store, where she met with customers and fashion editors and signed Falabella bags. On a side note, McCartney mused on the declining popularity of autographs in the world of smartphones and social media, where photographs carry more cachet.

“It’s a different connection with the person because you’re getting them expressing themselves with their signature,” she said. “They sound really old-fashioned, but I think they will probably come back around again.”

Later that evening, McCartney and her camp hosted a presentation of the fall collection at Tokyo’s British Embassy. Drizzly weather kept partygoers out of the garden, but the designer posed for snaps in front of shrubbery spelling out her name. Lukoff said the brand, which has another four shops-in-shop in Japan as well as about 50 wholesale accounts in the country, has been growing at a double-digit pace in recent years. The executive said ready-to-wear has been performing strongly and the Falabella bag has picked up momentum recently.

“We believe a lot in Japan. It’s really a priority market now. It’s showing great signs,” he said, adding that Stella McCartney will definitely open another store in Tokyo, possibly in Ginza.